“To do righteousness and justice is more acceptable to the Lord than sacrifice.” — Proverbs 21:3

“God sends the Church to work for justice in the world: exercising its power for the common good; dealing honestly in personal and public spheres; seeking dignity and freedom for all people…” — Book of Order, W-5.0304

It is abundantly clear through the gospel narrative and the greater witness of the Bible, that God has called us, as people of faith, to seek justice for those most marginalized in our world. As a Matthew 25 denomination, it is the vision of our church to eradicate white supremacy and dismantle institutionalized racism. Furthermore, in an effort to do the “hands & feet” work the Lord ordains, we must act and bear witness to the gospel in these crucial times.

As calls for the dismantling of structural racism are heard across the nation, you may be looking for ways to show your affirmation and support for the Black Lives Matter Movement and those who are most often marginalized and oppressed by our society. With that in mind, the Presbyterian Church (U.S.A.) has created a way for you to display your support. These resources demonstrate a belief that we are all one people, created by God, and deserving of love and respect, no matter our race, ethnicity, gender or sexual orientation.

“While the television and social media focus on the protests, nothing will change until we focus on the problem that evokes the response,” the Rev. Dr. Diane Moffett, president and executive director of the Presbyterian Mission Agency, noted in a statement released after the death of George Floyd in Minnesota. “Racism and white supremacy are sins. It goes against the teachings of Jesus, who admonishes us to love God and to love our neighbor as ourselves.”

August 23-29, 2021, the Presbyterian Church (U.S.A.) is hosting a Presbyterian Week of Action. This endeavor is structured to provide a public witness that facilitates education, visibility and action that reinforces our PC(USA) statements and policy around Shades of Oppression, Resistance & Liberation.

Why are we saying that “Presbyterians Affirm Black Lives Matter”?

Simply put: because Black lives do indeed matter. They/we matter to God, which means they/we should matter to God’s people.

Facing Racism: A Vision of the Intercultural Community, the PC(USA) Churchwide Antiracism Policy, first adopted in 1999 and revised in 2016, proclaims the following:

“While recognizing that racism victimizes many different racial ethnic groups, we acknowledge its unique impact on the African American community. Given the particular forms that anti-Black racism has taken in the United States of America both historically (including slavery and Jim Crow) and today (including mass incarceration, disproportionate policing, economic inequality, and continuing acts of racially oriented violence and hate), we state clearly: GOD LOVES BLACKNESS. Too many have denied this basic truth for too long. Our choice to align ourselves with love and not hate requires both a rejection of racism and a positive proclamation that God delights in Black lives.”

But don’t all lives matter?

Saying unequivocally that “Black Lives Matter” in no way means that all lives do not matter. It is rather an acknowledgment that many lives – specifically Black lives – are systemically devalued. As a community that tries to follow Jesus, we proclaim that such a devaluation of our siblings is an affront to the Living God. The Confession of Belhar reminds us “that God, in a world full of injustice and enmity, is in a special way the God of the destitute, the poor and the wronged.” Specificity toward Black lives is necessary, particularly in this moment, so that we may acknowledge and address the inequities that prevent the whole community from living as if all lives matter.

Does that mean we are claiming affiliation with the Black Lives Matter organization?

We understand there are those in our communion who do not agree with positions of the Black Lives Matter Movement as they understand them. Presbyterians have always been invited to use discernment in matters of faith and practice, understanding that “God alone is Lord of the conscience.” We have never been required to be in lockstep with matters such as these.

However, in our discernment we must be careful that we do not expect that we, a majority-white institution, may determine the path of liberation and equity for Black people, nor should we expect that we may “correct” the goals and methodologies developed by any community we seek to support. In all justice efforts, we must be led by the ones who are impacted. Black Lives Matter provides a way forward formulated for and by Black people. And we need not wait for complete agreement with every position before we act in ways that are loving, bold and (again) directed by the communities with whom we want to align.

In his Letter from a Birmingham Jail, the Rev. Dr. Martin Luther King Jr. spoke of the tendency of the white moderate who says, "I agree with you in the goal you seek, but I cannot agree with your methods of direct action," and “who paternalistically believes he can set the timetable for another [person]’s freedom.” This tendency denies justice to the oppressed and slows progress and wholeness for the entire community.

We also note that King and many other justice-seekers of the time were constantly accused of sedition. They were labeled as communists who sought to undermine the United States and were surveilled mercilessly. Even in the church, they were accused of being anti-Christian for disturbing the peace of the community and the God-ordained order of society. Today we hear similar claims that Black Lives Matter is “violent Marxist” and seeks to undermine the American (and Christian) way of life. While again respecting the discernment of each, we must name that these labels are not only untrue but rooted in anti-Blackness with intent to frustrate the efforts of Black people seeking justice for themselves. These things must be confronted with truth. Black Lives Matter is very clear about who and what the collective is and consistently addresses misinformation about the movement on its website. It is just and holy to hear people speak of themselves in their own words. The lived experiences of Black people are not mere matters of opinion.

I fear that the Presbyterian Church (U.S.A.) is getting too political and hopping onto the latest bandwagon.

Presbyterians have long been “political.” Civic engagement has always been part of the life of the church. The American Revolution and the structure of the U.S. government were heavily informed by Presbyterians. More nefariously, our articulation of the faith has also been used in service to the eradication of Indigenous people and the enslavement of African people on these lands. Prophets such as Henry Highland Garnet, Francis James Grimké, Gayraud Wilmore and Katie Geneva Cannon have all reiterated the gospel’s clarion call for liberation and engagement with the state, even when we would not listen to them. Eugene Carson Blake, stated clerk of the antecedent Presbyterian Church in the United States of America, was one of the organizers of the March on Washington for Jobs and Freedom in 1963. From the Westminster Confession of Faith and the Scots Confession, to the Theological Declaration of Barmen and the Confession of Belhar, our confessions have always instructed us on our role as Christians in the public square.

But before all these things, Christians were calling Jesus “Lord,” which is a civic designation. Christianity is inherently political. The word “political” has its root in the Greek word for “people.” Jesus commanded us to love God and neighbor. Our faith can never be extricated from our concerns for people.

Affirming that Black Lives Matter is very much in line with who we are as Presbyterians, and while the gospel of Jesus Christ is political, it is not partisan. It is not in service to any one political party or leaning, but challenges all of us to have righteous relationships with one another. We believe that justice for the oppressed is not and should not be a partisan value. Justice is a gospel value, one that all who claim Jesus as Lord should hold. We may have different ideas of how to live into the value, but as Christians we are beholden to it.

Signs are available for download in English, Spanish and Korean. Bring the version of your choice to any local store that has the ability to print yard signs and display the finished product at your home, church or business. We recommend printing 24″ × 18″ sign. 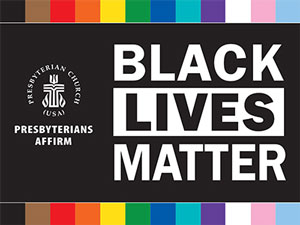 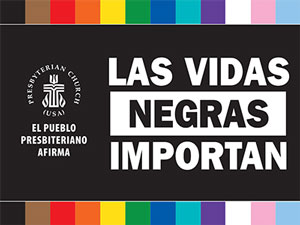 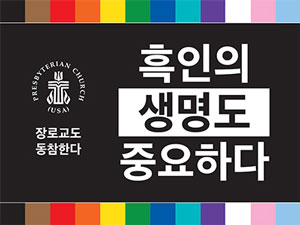 To install: Save image to your desktop. In Zoom app, click on up-arrow next to “Start video” button. Select “Choose virtual background...” Click + button to add image. 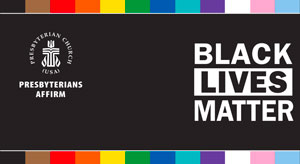 In the near future, we may offer window clings, magnets, shirts and other items uplifting the message that Presbyterians affirm Black lives matter.