Welcome to the blog of the Enough for Everyone program of the Presbyterian Church (U.S.A.). By "just living" we mean both justice-based living and just simply living – freeing ourselves from the clutter of stuff so we can focus on living faithfully and living well. Join us in the exploration!

About the Author
Bryce Wiebe coordinates Enough for Everyone, a ministry of the Presbyterian Hunger Program. He loves slow food and is fascinated by the way things are made.  He is excited to dive into experiments in simplicity with you.  His sacred cow of consumption: kitchen gadgets.

The Magnificat is a canticle, which is a fancy way of saying that it is the text of a song or hymn that is in the Biblical text.  In the case of the Magnificat, Mary’s prayer in Luke’s Gospel after hearing that she is to bear the Messiah, it was likely sung by the teacher in the earliest Christian churches, or perhaps sung by all those gathered.  It is the second image I prefer, if I’m being honest.

I have long heard that it is songs that carry the theology of the church, and that a pastor can’t out preach a hymn with bad theology if everyone likes to sing it.  Onward Christian Soldiers or In the Garden might be two examples I raise, but this post isn’t about them.

Consider the words of the Magnificat:

My soul magnifies the Lord
And my spirit rejoices in God my Savior;
Because He has regarded the lowliness of His handmaid;
For behold, henceforth all generations shall call me blessed;
Because He who is mighty has done great things for me,
and holy is His name;
And His mercy is from generation to generation
on those who fear Him.
He has shown might with His arm,
He has scattered the proud in the conceit of their heart.
He has put down the mighty from their thrones,
and has exalted the lowly.
He has filled the hungry with good things,
and the rich He has sent away empty.
He has given help to Israel, his servant, mindful of His mercy
Even as he spoke to our fathers, to Abraham and to his posterity forever.

There’s something powerful about the idea of poor, young, unwed girl singing these revolutionary words upon hearing of her task, and then, that they would then be echoed by other poor, disempowered people under Roman occupation at the dawn of Christian communities.   It is profound to imagine the intent of setting these words to music from the earliest moments of Christianity.  It is as though Christians of the first century knew that music must become the sea upon which the essential tenets of this faith would be carried; that the theology of the church would be known and believed insofar as it was sung.  And that what had to be sung was the radical reordering brought about with the incarnation.

Jesus offers, in the text of the Gospels, sermons, parables, images, examples, but not a song.  And Mary teaches us this one, and, if she really spoke or sang these words, perhaps she sang it to him, so that he would also not forget his calling.

This song has been set to music so many times I can’t even thing of a funny sounding exaggeration.  Bach’s version in D (BVW 243) is a pretty awe-inspiring version, and I’m sure many of you have your own favorites.  But somewhere along the line, we left the Magnificat to the professional soloists and choirs.  It shows up for Christmas cantatas and is sung at us, but rarely is found in the mouths of all Christians together, as a hymn that lifts our theology onto its back and instructs us in radical, incarnational truth that no silver tongued preacher could dissolve.  It is as though to the Magnificat we say, we simply Magnifican’t.  We can’t sing it.  The message is too radical.  The costs are too great.  If we learned this song too well, there’s no telling where our society might end up.  We can’t sing it, lest we start to believe it and start moving ourselves to the back of the line as those who are already mighty and already rich.

The language of Mary’s hymn is unsettling because it ties the glorification and magnification of God to those of the poorest and least empowered.  God’s glory and magnanimity, though, are not impacted by human action.  God is magnified - becomes larger to us, more present, more seen, larger – as we move, or are moved, closer to God.   In Mary’s song, that means being among the poor and the lowly.  The proud, rich, and powerful are disappointed and self-deceived.  They cannot see or receive God’s incarnation clearly.  They have other things magnified within their view.  God is magnified in our perception as we become poor, hungry, and powerless.  God’s incarnation is a theology with terrifying implications.  Maybe Christianity just can’t do that anymore.

To this end, I commend David Haas’s version and setting of the Magnificat.  A orchestral version follows and the melody (in 12/8 meter – different from the setting you will hear which is in 4/4).  The Celtic melody is lilting and singable and I have rarely been at a service where it is sung where tears are not shed.  In Mr. Haas’s mind, the words of the hymn become simple again. 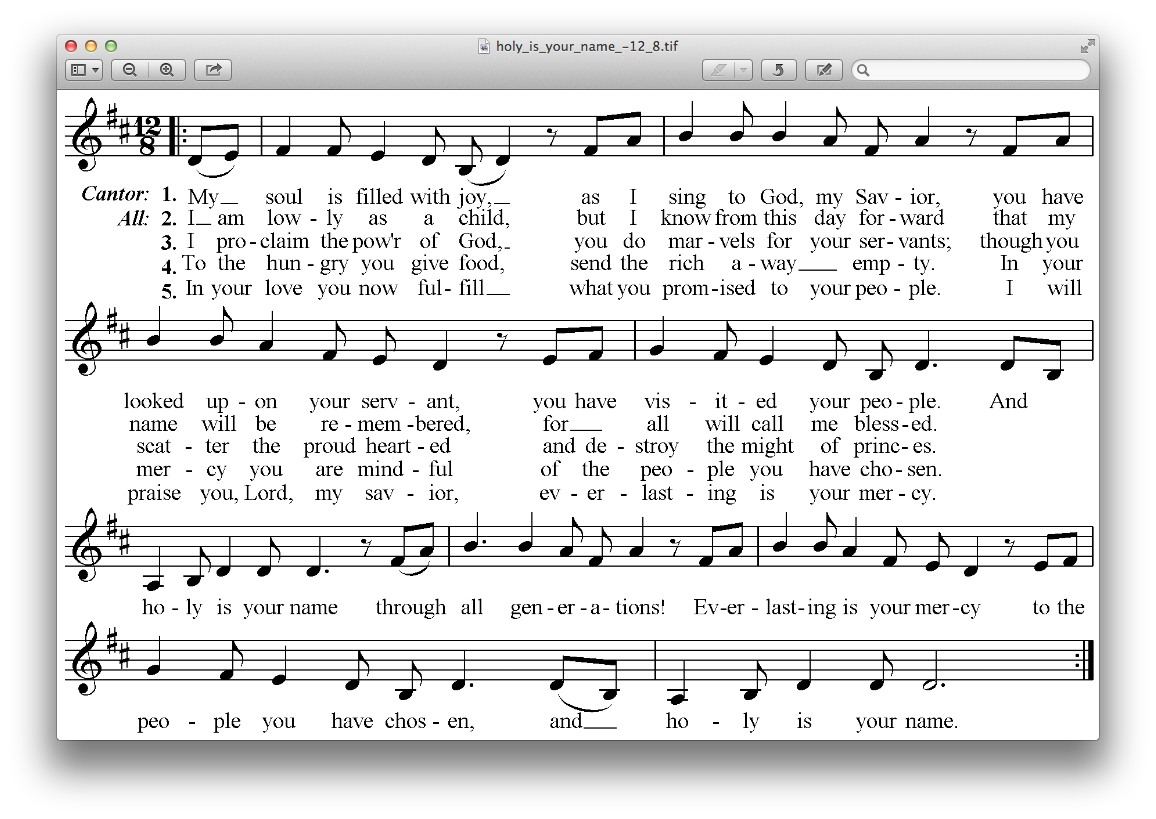 It is the version I want to imagine Mary singing to her newborn son; to the Word made flesh; the Salvation of the whole World.

15When the angels had left them and gone into heaven, the shepherds said to one another, “Let us go now to Bethlehem and see this thing that has taken place, which the Lord has made known to us.” 16So they went with haste and found Mary and Joseph, and the child lying in the manger. 17When they saw this, they made known what had been told them about this child; 18and all who heard it were amazed at what the shepherds told them. 19But Mary treasured all these words and pondered them in her heart. 20The shepherds returned, glorifying and praising God for all they had heard and seen, as it had been told them.

Lesson: That we can offer our response to God's great gift.

What you need: Not a thing.

It’s Christmas tomorrow!  Are you excited?  (likely an affirmative response) So tomorrow morning, you’re going to sleep in.  You’re going to quietly come out of your room and find your way to the tree, if you have one, and pass by it and walk into the kitchen and get a glass of water and sit at the table and read the paper… Are you going to do that?  (likely not) No?  Why won’t you do that?  Because you’re excited!! Right?  You know that something exciting has happened and you probably have a gift or two with your name on it.  You might rush – don’t run – but rush to the place with the gifts and…. Well, I think you should wait to unwrap them until someone gives you permission, but you won’t waste time.  You’ll be like the shepherd’s who heard about Jesus’ birth and rushed to find out.   Won’t you?

I will bet that you will.  So after you unwrap presents, what will you do then?  (you may allow them to answer, or ask it rhetorically.)  Well the shepherds have an idea for us.  What do they do when they leave?  That’s right they run and tell others what they heard and saw.  They tell people about Jesus and they praise God for sending Jesus to us.  Can you do that with me?  Can you say “Praise God”?  1-2-3 (“Praise God”).  Let’s do it again.  This is exciting news! This is a time where we can be loud.  Try it again.  1-2-3 (“Praise God!!!!”).  Wow! Everyone will know how grateful you are for the gift of Jesus.  That’s amazing.  Mary, Jesus’ mother, she also shows us a way we can respond.  We can also sit quietly and think.  We can think about the amazing things God does and lets us do.  Can you do that too?  Even when you’re excited?  Let’s sit together and quietly remember that Jesus came to be our friend; that Jesus is our very special Christmas gift.

Will you repeat after me:

Thank you for Jesus.

Thank you for this season of gifts.

We praise you, God

And with quiet prayers.

In your Son’s name,

How do we say thanks?    During these upcoming holidays, Thanksgiving and Christmas, many of us will draw our attention to what we have.  We will be encouraged to set tables full of wonderful and abundant foods and we will fill shopping baskets to overflowing.  We will gather these things together and in heaps and piles along with our loved ones and count them each as a blessing.  This season is, certainly, about being grateful for what we have.  The practice at many Thanksgiving tables is to have each person dining there offer one thing for which they are thankful.  …

Children’s Sermon Food Week of Action     Text: Matthew 25:31-46 31 ‘When the Son of Man comes in his glory, and all the angels with him, then he will sit on the throne of his glory. 32All the nations will be gathered before him, and he will separate people one from another as a shepherd separates the sheep from the goats, 33and he will put the sheep at his right hand and the goats at the left. 34Then the king will say to those at his right hand, “Come, you that are blessed by my Father, inherit …

If you haven't already, please consider giving My participation in this project supports the work of the Presbyterian Hunger Program If you have, consider sending a link to your friends   6If you put these instructions before the brothers and sisters, you will be a good servant of Christ Jesus, nourished on the words of the faith and of the sound teaching that you have followed. 7Have nothing to do with profane myths and old wives’ tales. Train yourself in godliness, 8for, while physical training is of some value, godliness is valuable in every way, holding promise …

Is this bike ride something I can do?    First things you should know is that I am not a bicyclist, strictly speaking.  In fact, I sometimes don’t even like it.  I tend to my body through lifting heavy objects and setting them down.  Repeat.   But I am is game for a challenge, and here is why:  The opportunity to ride in one of the most beautiful places in all the world, Northern California Time with other justice- committed and fun Presbyterians The chance to raise awareness about the important, root-cause work of the Presbyterian Hunger Program The opportunity to …