Through the Waters is the blog of the Presbyterian Church (U.S.A.) Christian vocation ministries. Because the ministry of Christian vocation affirms the need for all baptized Christians – including Presbyterians - to identify and claim their call to discipleship in each decision and life choice, this blog is designed to serve as a resource for youth and young adults, as well as those in ministry with them, to assist the Holy Spirit in God’s movement in this journey through the waters. Take some time to read and think about your own responses to the questions posed here. For additional resources, we suggest that you visit our website.

I recently participated in a marathon! Well, truth be told, I didn’t run the race but stood on the sidelines in a number of places to cheer on the runners. 26.2 miles is quite a trek so I felt it was the least I could do. But it turned out to be more of a gift to me than I could ever have imagined.

Right in front of me at mile 5 was a seven year old girl. With a cowbell in hand, she was cheering in earnest and thrilled as throngs of people ran by already red-faced but still fresh enough to smile and wave to the crowd of onlookers. It didn’t take long before she realized that if she held out her hand into the street, several runners would give her a high five. 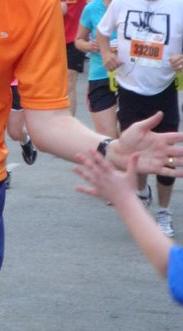 I watched this for quite a while. She gave up the cowbell to a cheerleader near her and began a ministry of hand slaps. In fact, she stopped encouraging the runners with her mouth and let her small hand speak for itself. And it was amazing!

Not every runner was willing to accept or even noticed her gesture but many of the 15,000 participants did.  A healthy number of runners who were right along that side of the street gave her a slap as they came by, some even a little too hard. But it was the runners who crossed from the middle of the street to get to that hand with whom I was the most intrigued.

Since I’m not a runner, I don’t know more about the phenomena -- there were many bystanders along the route who were also offering their hands -- but I began to wonder what it was that caused this participation from those who clearly had a goal in mind. Is it appreciation for those cheering you on? Another, more clearly defined, dose of encouragement? Or is it the need for community and human touch in the midst of a challenging and exhausting time?

Whatever the reason, it was clear that human contact was important. As we run our race, either literally or figuratively, connection with others is important. We need to cheer each other on; to encourage and inspire each other; to “provoke one another to love and good deeds.” (Hebrews 10:24)

I’ll take my lesson from the second grader and offer a hand while also noticing those who’ve stuck out their hand to me.

How have you held out a hand to another runner along the race?

What are the events in your own life when others have shown up just to help you along?

How has God’s presence been realized in those moments?