Home News Reaping what they sew

Reaping what they sew 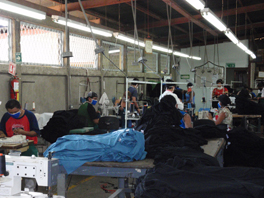 The Nueva Vida sewing co-op here is bustling with activity. Sewing machines are whirring, scissors are clipping and a light breeze moves through the building’s open windows and doors.

It’s a Friday morning, the last day of the work week. But the end of the week doesn’t mean the end of work for the co-op members, who often stay late to discuss business issues or hold board meetings. Saturdays are spent studying up on business practices.

But all that hard work is worth it for the co-op members, said Julia Yadira Vallejos, a co-op member.

Those are valuable qualities for the employees of the co-op, which was founded by a group of women in 2001 as a response to 1998’s Hurricane Mitch. Many of the founders and their families lived on the edge of Lake Managua, which flooded after the hurricane. They moved to a new neighborhood after the storm and eventually got help from a U.S. faith-based organization, Jubilee House Community.

The women decided to sell T-shirts after conducting market research and finding that the products seemed to be a sustainable business.

With funding from Jubilee House, the women bought building materials, but they didn’t have enough to hire a contractor. So they built the factory themselves. It took two and a half years, but finally the building was completed.

In the first years of the co-op, the women worked only on the production side of things, while Jubilee House staff handled the administrative side. But after seven years of this arrangement, the women decided they wanted more control of the co-op, and it became independent.

Learning to handle administrative functions was very hard, said Yadira. The co-op members had to learn everything from export regulations how to order materials and run the payroll. With help from other nonprofit groups, including a micro-financing group in Nicaragua, the women got the training they needed. The continued Saturday study sessions are proof of their dedication to taking control of their co-op.

“It was difficult, but not impossible,” Yadira said, adding that they are grateful for the confidence their clients have in them.

One such client is the Presbyterian Church (U.S.A.), which often purchases large quantities of T-shirts from Nueva Vida. The 2007 Presbyterian Youth Triennium T-shirts were made by Nueva Vida.

“It’s very important to buy the products directly from those who are actually producing them,” Yadira said.

Not all employees of Nueva Vida are members of the co-op. After one year of employment, workers are eligible to join the co-op board.

Employees earn the Nicaraguan minimum wage of about $140 a month, with the possibility to earn more if they produce more T-shirts. The work is largely seasonal, with about six or seven months’ worth of orders a year, but employees are paid their salaries no matter the season.

To order Nueva Vida T-shirts in any quantity, visit the Presbyterian Distribution Service.