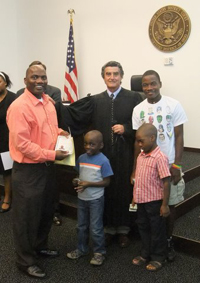 Isaac Monah with his family and the judge after he was sworn in as U.S. citizen last month in Cleveland. —Photo by Cleveland.com

On Oct. 19. Isaac Monah makes his second trip home to rural Liberia since he fled the war-torn country in the mid-1980s and subsequently emigrated to the U.S. in 2002.

Now a U.S. citizen — he took his citizenship oath last month — and an elder at Noble Road Presbyterian Church in Cleveland Heights, Ohio, Monah is going home to break ground for a school — Dougbe River Presbyterian School of Liberia — he promised God and his fellow villagers he would build for them.

"By the grace of God and the weather, we will have one classroom done by the start of the next school year in May," Monah told the Presbyterian News Service. "It will be enough for the students in the two closest villages. We will need a dormitory for the students from more distant villages."

There was no school anywhere near the rural village where Monah was born in 1970, so as a young boy he moved to Tolee, a city where his uncle lived, to attend school. But then he had to drop out of school to help support his extended family.

When Liberia's vicious civil war broke out in the 1980s, Monah fled to neighboring Ivory Coast, where he befriended a Presbyterian anthropology student, Scott McGraw, who invited Monah to come to the United States. After finishing high school in a refugee camp in Ghana, Monah came to the U.S. — McGraw was his sponsor — in 2002, first to Philadelphia and then to Cleveland.

He joined 85-member Noble Road Church and in 2007 returned to visit his home village for the first time since 1991. "It was so sad," he said. "The illiteracy rate is 75 percent. The unemployment rate is 85 percent. I saw that my people had no future."

Monah returned to Cleveland, determined that he would build a school for his village and those nearby. His first score: his village gived 150 acres of land on which to build the school.

When PNS first talked to Monah a year ago at the Presbyterian Church (U.S.A.)'s national Mission Celebration in Cincinnati, Monah had detailed plans for an entire campus on the land — classroom buildings, two staff and two student dormitories, a cafeteria, an administration building and two years' salaries — at a total cost of $300,000.

But the Dougbe River Presbyterian School first needed its first classroom building — cost: $32,000 — and Monah had raised only about half that amount. 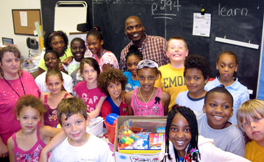 Isaac Monah (left) and students at Roxboro Elementary School after they exceeded their fundraising goal for Dougbe River Presbyterian School.

But he never doubted, never got discouraged, and this week — with Isaac Monah and Noble Road's pastor, Francis Miller in attendance — ground will be broken on the first classroom. Contributions are up to $44,000 and more and more Clevelanders are catching Monah’s vision.

"Since we talked to you last year, there's been good momentum," Miller told PNS. "We have lots of partners and they are growing. The fundraising is even expanding beyond churches."

Students at Roxboro Elementary School in Cleveland Heights took part in a read-a-thon to promote reading and raise money for the school. They have raised $5,000, surpassing their goal of $3,000. Roxboro's principal, Tara Grove, promised she would dance on the school's roof if they reached their goal. She did that June 8.

Another local school has raised enough to pay for the doors on the school building and yet another school has pledged to raise $10,000. A local middle school has collected more than 500 books for Dougbe River Presbyterian School’s library.

"Lots of churches are coming out to help us," Monah said. The Presbytery of Western Reserve has used its portion of the Presbyterian Peacemaking Offering to contribute and the Synod of the Covenant has also committed funds. In all, at least 14 churches in Western Reserve have helped raise funds for the school.

Parma-South Presbyterian Church in Parma Heights even sponsored a fund-raising golf tournament last month. "It was only my second time," Monah laughed. "I was terrible."

He is eager for the trip home for the ground-breaking. "Last year I told my people that I believe in God and I know that everything is possible with God, even if it takes a lot of time."

Now, with construction set to begin on the first school building at Dougbe River Presbyterian School, Monah continues to plan ahead. "Next," he says, "we're going to build a church."