NYC church building is designated landmark, despite protests from congregation 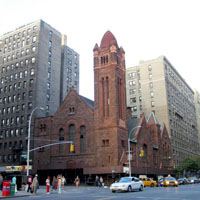 With last week's decision by the New York City Council to uphold the historic landmark designation of West-Park Presbyterian Church, church officials and congregants must once again address what to do with their deteriorating building.

"We are obviously disappointed with their decision," said the Rev. Robert Brashear, pastor of the 116-year-old church. "This battle is not over. We simply have to stop and reconsider our options. This fight is not just about West-Park Presbyterian. It raises a much broader question about the freedom of religion."

West-Park's congregation and its supporters have fought the landmark status for more than two decades. Their belief is that forcing the designation upon the congregation impinges on freedom of religion and that the financial burden of restoration and upkeep of the deteriorating building would be too great.

"The government has no right to take away the life of a church to save a building," said Brashear. "Nobody has taken seriously the expense of restoring this building to functionality."

Two years ago the congregation was forced to close the doors on its church building, located on the corner of Amsterdam Avenue and 86th Street in Manhattan's Upper West Side. The building, with its red sandstone façade and distinctive bell tower, is recognized by many as one of the best examples of a Romanesque Revival style religious structure in New York City.

Its once thriving congregation has dwindled to less than 100, with only half of those being active members. Worship services are now held in the basement of the Church of St. Paul and St. Andrew.

Following the New York City Landmark Commission's January decision to approve the church as a historic landmark, the Presbytery of New York City opted in March to put West-Park on the market.

While there is no official asking price, Brashear said the value of the church is in the neighborhood of $7.5 million. The value of the church before gaining landmark status was estimated at $30-35 million, but the legal requirements for restoring a landmarked building have severely decreased the price of the building and made it less desirable to developers, Brashear said.

"Selling the church building is not something that we want to do, but we may have to consider that option," Brashear said.

In 2006, the church was working with a developer on a proposal that would preserve its main sanctuary and tower and erect a mid-block 21-story apartment building with about 70 units. At that time, church said the planned development would not alter the exterior of the main building and bell tower. But with preservationists opposing the plan from the beginning, the deal fell through.

Preservationist groups, particularly Landmark West, Inc., have long insisted that the financial burden would fall not only on the shoulders of the church but also on the community. But according to Brashear and other church members, neither preservationist groups nor the community have contributed financially to the upkeep or restoration of the church.

"We have had many verbal offers of funding for West-Park," said Brashear. "But there is a difference between verbal support and real, concrete financial support."

Brashear said that filing a lawsuit against city could be an option.

"That is a possibility, but it is a costly and time-consuming proposition," the said. "It would most likely take years. The end result would not benefit us, but those who will serve and worship in the church in the years to come. It would not only benefit our church, but all churches of all denominations because forced landmarking on any religious entity is legally and morally wrong."

During the weeks leading up to the city council's vote, bitterness between the congregation and preservationists came to a head.

West-Park Elder Hugo Meneses was arrested during an April 17 protest against efforts to landmark the church. Meneses was stopped by police as he attempted to paint "Stop Gale Brewer's Forced Landmarking" on the sidewalk scaffolding around the church.

"The concept of forced landmarking is unconstitutional," said Meneses, a member of the church for eight years. "The so-called preservationist groups have little care about the effects landmarking would have on the congregation or the church itself. Their only concern is trying to preserve the building without making any effort to help financially. They have been trying for 25 years to have this church landmarked. They make big promises, but they are empty promises. How much money have they raised or gived to help restore the church over the last 25 years? None."

Meneses says the fight against the forced landmarking is not over, but he does say the congregation must turn to God to discern which direction it must go now.

"We feel it was a defeat," said Menses. "But we still have the desire to serve God and the community. In what capacity we do that now remains to be seen. We have to remember that God still provides and ask ourselves 'What is God calling us to do now?'"

"We will still continue to fight the forced landmarking because it is wrong, but we have to look at how much effort we have put into fighting for that cause and how much that effort is taking away from our mission to help serve God and our fellow man."

Another church member, Elder Jim Nedelka, is bitter over what he says is a moral and legal wrong.

"These vigilante groups are dictating to the city council what decisions to make," Nedelka said. "They expect us to restore the church without any infusion of capital. What do they expect us to do? From a moral standpoint, these people care very little about the congregants of the church and how this will affect them. From a legal perspective, the forced landmarking infringes on the church's right to serve its congregation and its community without interference from the government. When does the Constitution of the United States come into play?"

Brashear said that despite the animosity between the congregation, the preservationist groups and the city council, dialogues will hopefully continue and the best interest of the church and the community can be addressed.