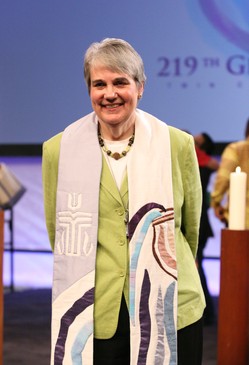 Cynthia (Cindy) Bolbach, an elder from National Capital Presbytery, was elected Saturday night as Moderator of the 219th General Assembly (2010) on the fourth ballot. She was the only elder in a field of six candidates.

Bolbach employed brief answers and a winsome sense of humor to win over the 712 commissioners and steadily gained ground, rising from 149 votes (30 percent) on the first ballot to 325 votes (53 percent) on the decisive fourth ballot. None of the other five candidates exceeded 23 percent of the vote on any ballot.

Voting was extended several times by glitches in the electronic voting system in the plenary hall. After being installed, Bolbach quipped, “I hope my new middle name isn’t ‘Florida.’ ” Her running mate for vice-Moderator, the Rev. Landon Whitsitt, pastor of First Presbyterian Church in Liberty, Mo., (Heartland Presbytery) will be installed later in the week.

Bolbach told the commissioners, “I love being a Presbyterian elder. I cherish the equality that the church gives to ministers and elders. In fact, elder commissioners have an advantage: Elders rule!” she said, referring to a recommendation from the Form of Government Task Force, which she has chaired for four years, that the church return to using the term “ruling elder.”

Bolbach likened the PC(USA) to the man who was paralyzed in Luke 5 whose friends lowered him through a hole they knocked in the roof so he could be healed by Jesus. “Our denomination is that paralyzed man,” she said, “paralyzed by fatigue, uncertainty, fear, grief over the loss of the kind of church some of us have known and loved all our lives.”

“We are more than just commissioners,” she told her colleagues in the hall. “We are the friends … who have to figure out how to break through these roofs, to bring our paralyzed church to Jesus Christ, to give our paralyzed denomination to Jesus, so Jesus can start the healing.”

The six candidates frequently noted that they represented the theological spectrum in the PC(USA). Still, a strong rapport among them was obvious.

“I’m probably more conservative than my colleagues up here,” Leeth said, “but we’ve been blessed to realize we all have gifts to offer, and we love and respect each other because we have built relationships.” She urged the PC(USA) to do the same. “We need to do church better to be a healthier denomination and more faithful followers.”

Nielsen emphasized his leadership experience and “pastor’s heart,” which he said could help the PC(USA) “reclaim a positive voice for a positive future.”

Punctuating his speech with song, Belle, a professional musician, said, “I want us to see one another as children of God, made in God’s image, and thus loving each other in the name of Jesus Christ.”

Kim, a Korean-American, third-generation Presbyterian, decried ideological battles in the PC(USA), which he said “miss the massive demographic shifts that are the real cause of our decline.”

Only one question from the floor touched upon any of the several controversial issues that this Assembly will tackle in the coming week: whether to change the constitutional definition of marriage from “between a man and a woman” to “between two people.”

Four candidates – Leeth, Nielsen, Kim and Belle – endorsed support for the traditional definition. Though same-sex marriage is not legal in her native North Carolina, Lauterer said “in states where it’s legal, the church should have a part in that union … Covenant makes the community stronger.”

Only Bolbach expressed unqualified support for same-sex marriage. “Who poses the greatest threat – Larry King, who’s been married seven times, or a gay couple [friends of hers] in Washington, D.C., who have been together for 62 years and who got married two weeks ago?” Same-sex marriage is legal in the District of Columbia and five states.

Bolbach, who is a lawyer and legal publishing company executive in Washington, acknowledged, “I don’t think our denomination is ready for [changing the definition of marriage], but what do pastors do in jurisdictions where same-sex marriage is legal?”