Home News Doctor speaks emotionally of those in need of abortions

Doctor speaks emotionally of those in need of abortions 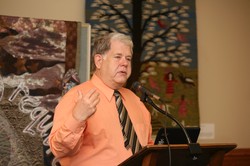 Dr. Leroy Carhart, member of the board of directors of the Religious Coalition for Reproductive Choice (RCRC), spoke at the Presbyterians Affirming Reproductive Options Luncheon on Monday. —Photo by Danny Bolin

Abortion is an emotional issue to Dr. LeRoy Carhart, member of the board of directors of the Religious Coalition for Reproductive Choice and one of the few late-term abortion providers in the United States.

He spoke during the Presbyterians Affirming Reproductive Options luncheon on Monday.

Carhart said the abortion debate needs to concentrate on the mother. Saying that the “mind of the mother determines when life begins,” Carhart added that when the issue of abortion arises, “I’m asking you, please, let it be the mother.”

He urged political action, urging specific work to remove the continued inclusion of the Hyde Amendment from federal appropriation funding. The amendment restricts the federal government from funding abortions for individuals on Medicaid.

When he was asked why he performs abortions, Carhart responded, “The lives that I touch and the women I see make it a necessity for me.”

At the same time, he said he would like to see an end to abortion, but doesn’t believe that’s going to happen. “We’re trying to prevent the need for abortion, but that’s utopia.”