A different kind of refugee camp 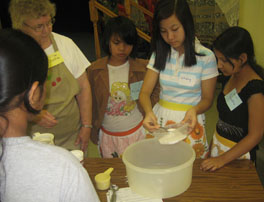 Editor's note: This is the latest in a series of stories about congregations responding to the Presbyterian Church (U.S.A.)'s call to "Grow Christ's Church Deep and Wide." The call to grow in evangelism, discipleship, servanthood and diversity was adopted by the 2008 General Assembly and renewed by the 2010 General Assembly. — Jerry L. Van Marter

For many affluent kids in the Silicon Valley summer is one activity-packed day camp, sleep-away camp and enrichment class after another.

Yet for the children of refugee families, newly arrived in the United States and living below the poverty level, it can be a couple of months of nothing to do and nowhere to go. They need enrichment to adjust to life in their new country, but often get nothing. 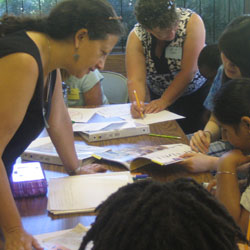 Thanks to volunteers at Sunnyvale Presbyterian Church (SVPC) in Sunnyvale, Calif. — part of San Jose Presbytery — and a secular non-profit called Refugee Transitions, 25 refugee children and youth recently enjoyed two weeks of a free summer day camp. They received English instruction and experienced games, crafts, and other activities to help them prepare for school and life in their new community.

A unique aspect of the camp was the pairing of church children and youth with the refugee students, to give both sides windows into new worlds.

"I was really surprised when on the first day of the program so many of the kids came from so many countries," 15-year-old volunteer Vicky Lee said.  "It's good because not only are we helping them out with English, they can teach us so much about their countries and cultures, too."

The refugee children and youth who participated in the camp have all been in the country one year or less, and know varying levels of English. They came from 10 different countries in the Middle East, Asia, Africa and Central America, representing 11 languages and dialects. 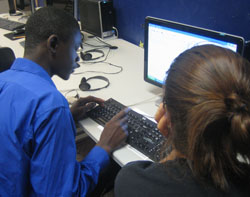 A 15-year-old from Tanzania practices English on a computer.

"I was wondering what the (refugee children) were going to do during the summer," Shaver said. A few of them qualified for summer enrichment with their school district, but the rest would have no services. From Shaver’s question an entire plan for a camp took shape. She took her idea to church leaders and Refugee Transitions staff, who were willing to proceed.

"Ours is a community of faith that believes hospitality is at the very heart of God," said SVPC’s pastor, the Rev. Steve Harrington.  "In this camp we are seeking to reflect that reality by helping refugee children and youth feel more at home here in the Bay Area."

Another church member, Elsa Amboy, works part time for Refugee Transitions as its South Bay program manager, and part time as one of the refugee ministry advocates for the Presbytery of San Jose. She and Shaver worked together to create the camp.

"There are no other camps currently available (in the South Bay) for refugee students that are free," Amboy said. "Most of our families fall under the poverty line, and so we targeted refugees who were under that line and could possibly use such a camp."

Many hurdles were overcome to make the camp a reality. Volunteers raised approximately $3,000 to pay English as a Second Language (ESL) teachers and purchase materials. Volunteers were found to transport students to the camp. Still more volunteers were recruited to tutor the students, and lead recreational activities, approximately 40 in all.

"I had several goals, and the interaction of our community members was a really important part of it," Shaver said.  From the start she planned for church members of all ages to work side-by-side with the refugee children. She especially wanted the children of volunteers to be paired with refugee students to help them in their studies and activities.

"The response has been great," Shaver said. "People were really excited to be participating." 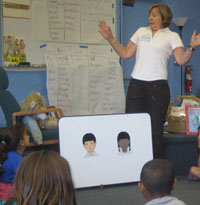 The successful camp could spark plans for future camps, something Amboy said is needed for the estimated 500 to 600 refugees who settle each year in Santa Clara County alone.

English teacher and church member Dorothy Dickson, a retired English language development specialist for a local school district, thinks the camp could be "canned" and reproduced elsewhere around the United States. She said it is extremely challenging to teach such a wide variety of ability levels, and it takes numerous volunteers to pull everything together. However, she said they are challenges worth tackling.

"I think it's great because the kids are happy, and they're learning to be positive with one another," Dickson said. "If they didn't have this they'd be sitting at home."

Pam Marino, an elder at SVPC, is a Silicon Valley freelance writer and creator of her own website, Good Neighbor Stories.