Home News A child … well, a teenager … shall lead them

A child … well, a teenager … shall lead them 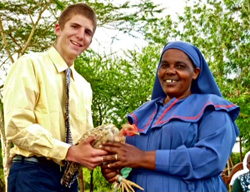 Hunter Badgley (left) with one of his Kenyan hosts (right) and her chicken (center). —Photos courtesy of Hunter Badgley

Editor's note: This is the latest in a series of stories about congregations responding to the Presbyterian Church (U.S.A.)'s call to "Grow Christ's Church Deep and Wide." The call to grow in evangelism, discipleship, servanthood and diversity was adopted by the 2008 General Assembly and renewed by the 2010 General Assembly. — Jerry L. Van Marter

STATESVILLE, N.C. — Most teenage boys think about friends, girls, video games, sports, cars and maybe school sometimes. But 17-year-old Hunter Badgley, a member of Haines Presbyterian Church in the Presbytery of Alaska, has had something completely different occupying his mind since he was 12.

Badgley wanted to help people and do some good — and he wanted to do it in Africa with his fellow youth group members.

"When I first really felt called, I just had Africa pop into my mind," Badgley said. "It was just an idea in my head, and then a week or two later I took a trip to Fairbanks with my youth group and someone talked about a calling from God, and it was exactly the same as how I felt about Africa."

Badgley went to his parents and to his pastor, the Rev. Ron Horn, with the idea. They thought it was a nice idea but didn't take it particularly seriously coming from a 12-year-old.

"We thought, 'Oh well, this is kind of a pipe dream.' Everyone who heard about it initially felt the same," Horn said. "I guess we really didn’t take him quite as seriously as we should have."

Badgley persisted and got in touch with the Rev. John Zimmerman, a retired PC(USA) minister who had done extensive mission work in Kenya and who had once been an interim pastor at Haines Presbyterian. Zimmerman responded and encouraged Badgley, giving him some steps to start working toward his goal, such as doing preparatory Bible work, learning some Swahili and recruiting other people to go.

"Hunter went about fulfilling those requirements in a deliberate and consistent way," Horn said. "Hunter recruited every other young person who went on this trip. He led them in Bible studies for over two years. He organized and pursued fund raising. He met with skeptical parents and continued to encourage and lead this entire group for two to three years."

Fund raising was no small part of the effort. Haines Presbyterian Church, the largest church in town, has 66 members with a summer average attendance of 100-110 and a winter average attendance of 80. The youth group Badgley belongs to is an ecumenical group with members from four churches because none are large enough to have their own group. Haines has about 2,000 residents in the summer, with maybe 1,400 people in the winter.

And yet, from that small community, Badgley and his group were able to raise $40,000 — enough to pay for the six youth and three adults who went on the trip this summer, with about $3,000 left over that they plan to send to Kenya.

"Haines is a really supportive community," Badgley said. "Once others got involved, it just kept growing and growing. One fundraiser that raised $6,000 we didn’t even have anything to do with. The women of the church held an auction to benefit the trip. Half our group was out of town at a cross country meet.

"We've been supported by so many people once they saw we were serious. It wasn’t that hard to stay dedicated once we showed we were dedicated in the first place and had the first fundraiser," he said. 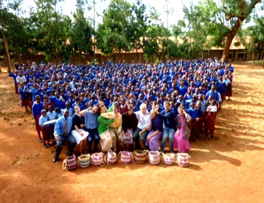 The Haines group with the teachers and students of a school in Kangundo, Kenya, where the mission trippers helped with some construction work.

"He was the visionary, the leader, and provided the 'glue' that held this group together," Horn said. "When it looked like the trip would become a reality, he recruited the adults to go along."

The trip that Badgley had in mind was different from most mission trips. He and Horn both emphasized that this was not the usual model of adult leaders bringing kids along, but rather a young people’s trip accompanied by the adults.

They did not go with a mission organization but formed a partnership with an African Brotherhood Church in Kangundo, an hour east of Nairobi, which would host them for the trip.

Zimmerman encouraged an "independent" trip so the group could get a real experience of Africa, something usually not possible with an organization that merely sends you in to do a project and then leave. Zimmerman had taught the Kenyan pastor who hosted Hunter’s group and helped them make the connection.

"We were going in and living with the people and working with them every day for an entire month," Badgley said. "We really immersed ourselves in the culture and experienced their way of life."

It was also much longer than the "usual" mission trip. Zimmerman had encouraged Badgley to plan the trip for two months, long enough to really be a part of the ministry in Africa.

"When Hunter said he wanted to go for two months and there were other kids involved as well, I remember meeting with parents and they said absolutely no way, mission trips are 10 days at the most," Horn said.

The trip was eventually shortened to one month as a compromise.

Once in Africa, the group did a variety of things. They visited primary schools and spoke to the children, who were fascinated to hear about the changing seasons in Haines, something not really experienced in the equatorial nation of Kenya. On Sunday mornings they preached at different churches. During the week they went to prayer groups and devotions and also went door to door in the community visiting and praying with people.

"We'd go with four or five people into a home and someone might say 'OK Hunter, you are going to bring the message here today' as we went in and that’s all the notice we were given," Badgley said.

The others in the group would sing or pray and find out the needs of the people in that home and pray for those needs. The group members posted blogs with moving descriptions about how close they got with the people by going to their homes and sharing some sort of message with them.

A little bit of project work did enter the trip as well as the group helped build a second story on to a multipurpose building. The first floor serves as a Sunday school with a clinic and offices upstairs. 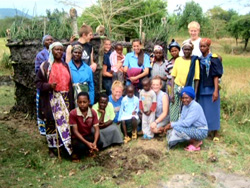 The nine-member mission trip group from Haines, Alaska, with some of their Kenyan hosts.

In honor of their help, their African hosts named the building the Alaska House and the upstairs clinic was called the Infinite Life Clinic, named after the youth group. The people of Kangundo wanted to remember not only the six youth who were there, but the entire community who supported them and made the trip possible.

"We were really blessed by them. They were so hospitable and welcoming and it was really hard to do anything to serve them near as much as they served us," Badgley said. "Everyone really felt blessed. A lot of first time missionaries feel they were blessed more than what they blessed those they went to help and that applies here too. All of our lives were changed and our eyes were opened. It was definitely worth the month we were there."

"Hunter is a thoughtful, quiet and humble young man," Horn said. "God placed this vision to go to Africa on his heart, and he followed through, even despite some lukewarm responses from his pastor and his parents."

The Rev. David Dobler, pastor to the Presbytery of Alaska, said that Badgley’s story is a great witness to the presbytery and shows what a congregation can do to support of one of its members.

"Hunter was baptized in that church, and the congregation takes that very seriously, but they could not have known what it would mean when they vowed to support and nurture his spiritual growth," Dobler said. "This is a wonderful witness to them and what it means to be sponsoring someone as they grow in faith."