Growing multicultural congregation reaches out to the homeless in Las Vegas 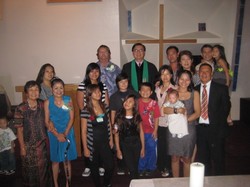 Eleven new members - 8 who were baptized and 3 who joined by transfer of letter - are pictured here with Rev. Prachuab Dechawan and his wife, Gloria (at far left), following the church’s 9th anniversary celebration service on September 4, 2011. —Photos by Elder Somsak Poolperm.

God’s declaration in the book of Isaiah to call God’s house “a house of prayer for all nations” is a charge First Thai-Laotian Presbyterian Church of Las Vegas, Nev., takes to heart as they build a multicultural ministry. But little did church members know that they would welcome into their house of prayer people from a “nation” forgotten in this country: men living on the Las Vegas streets and sometimes in the bushes behind the church.

When the church organized in 2002 it consisted of four families meeting in one another’s homes for prayer groups. Now on any given Sunday those attending the afternoon Bible study, dinner and worship service might include people from a dozen different ethnic groups. Rev. Prachuab Dechawan leads the growing congregation, which numbers 60 members. He has been shepherding the growth of Thai Presbyterian churches in the United States since the early 1970s, when he helped to establish the first congregation, Thai Community Church in Hollywood, Calif. Other churches formed in Fort Worth, Chicago, New York, and San Jose.

The early 1980s saw a wave of refugees fleeing to the southern California area from the killing fields of Cambodia during the Khmer Rouge regime. Many of these people were ethnically Laotian, refugees in Cambodia from nearby Laos. The Lao language is similar enough to Thai to be understood, Dechawan says, and the churches reached out to embrace these immigrants and help ease their transition into life in the United States.

“We’ve all had to learn, how can we sing the Lord’s song in this new country?” Dechawan says.

With a sizeable community of both Thai and Laotian immigrants in Las Vegas, Dechawan and his wife, Gloria, moved there from southern California in 2002 to establish a new congregation. The initial goals of First Thai-Laotian Presbyterian Church were to reach out to this community in Las Vegas, to join together in worship that features traditional music and dance, and to explore Christian faith from a Southeast Asian context. But they have now become the embodiment of a congregation striving to grow Christ’s church through evangelism, discipleship, servanthood, and diversity. These four pillars form the “Deep and Wide” commitment made by the General Assembly of the Presbyterian Church (U.S.A) in 2008. This effort echoes Christ’s parting words:

“… All authority in heaven and on earth has been given to me. Go therefore and make disciples of all nations, baptizing them in the name of the Father and of the Son and of the Holy Spirit, and teaching them to obey everything I have commanded you. And remember, I am with you always, to the end of the age.” (Matthew 28:18–20)

Thailand and Laos are both predominantly Buddhist countries. Dechawan says the church reaches out to Thai and Laotian families to bring the gospel to them, often by bringing in their children first. 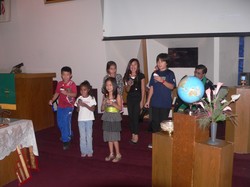 The children of the congregation joyfully praise the Lord.

“A child shall lead them. The children will come to worship, then the parents will join them. This way the whole family can come to Christ.”

Before worship every Sunday there is a time of Bible study and discipleship, when together members delve into the Word of God. Then they share a meal together, Thai and Laotian food faithfully prepared every week by several women in the church. They open their doors to anyone, which is how the homeless men living behind the church came into the community.

The congregation had already been reaching out to the homeless population, Dechawan says, taking turns with several other area churches in hosting a half-dozen families—white and Hispanic—helping them out with food and temporary housing until they could get settled into apartments. Then a few of the men living on the street heard about the Sunday dinner and began joining in, sometimes staying for worship, sometimes not. And gradually a few began coming early for the Bible study before dinner.

“Many of them suffer from addictions," the pastor says, "and sometimes a man would come into Bible study half-drunk.”

But no one was turned away.

Dechawan remembers in particular the first time Ron came for worship. He had spent 17 years in prison and was struggling to reclaim his life after his release. He tentatively entered the church one Sunday and right away was accosted by a 6-year-old girl.

“She jumped up on him and said, ‘Welcome home!’” Dechawan recalls with a laugh. “Ron told me later that his mother had just said to him, ‘You’ve tried everything else, now try God.’ This girl’s words were like God speaking to him.”

Ron began bringing other friends from the street into church. Dechawan and some of the members helped these men find treatment programs for their drug and alcohol addictions, as well as jobs in some cases. They also sent Ron several times to the Southeast Asian Lay Training Program at Austin Presbyterian Theological Seminary, an academy for lay preachers sponsored by the General Assembly Mission Council’s Advisory Committee on Southeast Asian Ministries. Now he assists with the church’s ministries in various ways, sometimes leading Sunday worship service.

“We used to preach the sermons in Thai, but now there are so many people from different backgrounds coming, we preach in English and translate into Thai.”  The church now draws in people who are Thai, Laotian, Cambodian, African American, Nicaraguan, Chinese, Indian, Korean, Filipino, Native American, and white. 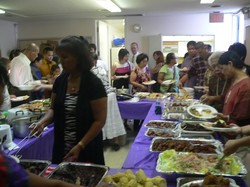 Everyone was cordially invited to the love supper before the 9th anniversary celebration service.

“We are part of a multicultural church," says Dechawan. "We all join together for worship on World Communion Sunday, and also on Thanksgiving Day. That day we have a meal also, for people who have nowhere to go to eat.  I usually cook four or five turkeys. Last year, we fed 80 people.”

When Rev. Mei-hui Chen Lai, associate for Asian Congregational Support in the Racial Ethnic and Women’s Ministries/Presbyterian Women ministry area of the General Assembly Mission Council, visited the congregation for the first time, she says she was profoundly moved by her encounters with people from so many different cultures. “I met a young white man who was so proud to introduce himself to me as a member of the Thai congregation,” Chen Lai says. “He was so cordial and sincere in inviting me to join him in the community meal following the Sunday service.”

Leading a congregation that is growing increasingly multicultural can present particular challenges—language barriers, worship styles. But Dechawan and his wife, Gloria — from the Philippines herself — know the key ingredient any congregation needs to succeed.

“Love,” Gloria says simply. “It’s the one word that ties us all together. Love for God, love for other people.”

“We want to make the congregation feel that when we have Christ, we must not keep that to ourselves. We must share him with others,” Dechawan adds. “Without missionaries in Thailand 200 years ago, I wouldn’t be here today."

When more congregations follow the example of First Thai-Laotian Presbyterian—reaching out to all nations in Christ’s name, crossing barriers of ethnicity, race, and economic class, greeting the stranger at the sanctuary doors with a resounding and joyful “Welcome home!”—then Christ’s church will indeed be growing “Deep and Wide.”

Kimberly Burge is a freelance writer based in Washington, D.C., and Cape Town, South Africa.

For more information on the office of Asian Congregational Support, which resources congregations such as First Thai-Laotian Presbyterian Church, visit the office's website or email Mei-hui Chen Lai.