Evangelism on the Great Lawn 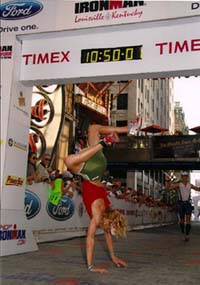 Ryan Althaus, founder of Team Sweaty Sheep, at the finish of the Ironman. —Photo courtesy of Ryan Althaus.

Just over a month ago, the great lawn of the Presbyterian Church (U.S.A.) was swarming with people. They came from all over the country, and the world, to participate in the Louisville Ironman Triathlon. As they walked in front of the Presbyterian Center, a new worshiping community known as Team Sweaty Sheep was reaching out to athletes and fans with bottles of water, words of encouragement, prayer and PowerAde, connecting them to Presbyterian mission and ministry.

“So many people were excited that Presbyterians are trying to get active in their congregations and worship in ways that make sense to athletes,” adds Alex Becker. The senior grad student at Louisville Presbyterian Theological Seminary is on the ministry leadership team at Sweaty Sheep. “We are grateful to the Presbyterian Church (U.S.A.) for opening their grounds for some evangelism and fun.”

Team Sweaty Sheep is a ministry of the Mid-Kentucky Presbytery through its Ecclesia Project initiative which helps develop and support new Christian communities. Founded by LPTS seminary graduate Ryan Althaus, Team Sweaty Sheep is about “Christianity on the move” and “getting people to play together in the name of God.”

“My first idea was to do church on a boat,” says Althaus, who led a kayaking Bible study at his home congregation in Maryland, Christ Our Anchor Presbyterian Church. “We were doing a study on the correlation of water and spirituality. As we read from Mark about Christ calming the storm, a squall danced along the horizon. That planted the seed.”

At the end of that summer, after moving to Louisville for seminary, Althaus was hit by a car while training for a bicycle race. The once elite runner was left with a concussion, neck trauma and multiple layers of stitches. As he recovered he began to realize at a deeper level how important health and exercise were to faith practices. “I had this desire growing inside of me during recovery,” says Althaus. “The accident settlement gave me the resources I needed to move on this idea I had.” He bought a big trailer “for church,” a sound system “to make the Word heard,” a new bike “to serve as a pew” and proceeded to “have church.” He discovered there were a lot of people at the races who believed in God but weren’t going to church, and there weren’t a lot of his church friends going to the races. “For the endurance athlete, Sunday morning is race morning,” says Althaus. “What Sweaty Sheep is doing is bringing church to the people who are already gathered and building personal relationships with them.”

Althaus gave an Ironman prayer for 3,000 athletes at a Friday night gathering, and then prepared to complete his weekend mission. He and his coach, Philip Lotspeich, coordinator of Church Growth Ministry for the General Assembly Mission Council, had agreed to pray for supporters of Team Sweaty Sheep as they competed in the 140.6 mile Ironman. “I see heaven as an eternal runner’s high,” says Althaus who finished the 2.4-mile swim, 112-mile bike ride and 26.2-mile run in 10 hours and 34 minutes, with a series of six minutes miles. He dedicated the final lap to his friend, John Edward Roth. “His battle with cancer ended a year ago but he was my final inspiration for Team Sweaty Sheep.  I found this kind of deliberate prayer — remembering him praying for his family and being in conversation with God about the all the people connected to this ministry — to be incredibly refreshing.”

For Lotspeich, who completed his second Ironman, it was a joy to have the time and solitude to pray for others. “You can’t have an iPod on the course, and 15 hours is a long time to be moving forward,” he says. “It was satisfying not worrying about my own finish time and encouraging people who seemed to be struggling. It was nice to let go of my own ego, to realize God has put me here for someone else. For me that’s what Team Sweaty Sheep is.”

As team ministry member Alex Becker says, “For people who meet God when they run, bike or swim, it is encouraging to see the church reflect the ways they experience God. Worship doesn’t just happen in the pews, but out in nature when people push their bodies to the limit.”

Team Sweaty Sheep has been working with churches in Mid Kentucky Presbytery, hosting kickball leagues, Frisbee nights and worship services. They are getting ready to release a four-week “Couch to 5K” Bible and devotional series so churches around the country can be part of the Team Sweaty movement.