Home News Mission at any age

Mission at any age 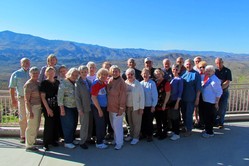 Mission trips are primarily for the young, and there is little value to a short mission trip. These are two popularly held notions that the members of Faith Presbyterian Church in Sun City, Ariz., recently proved to be untrue.

Sun City, in southern Arizona, is a retirement community, so the members of Faith are older than in other congregations. But they recently embarked on a mission trip anyway.

In October, the Rev. David Van Arsdale, pastor of Faith, boarded a bus with 24 members of his congregation ranging in age from mid-50s to 94. The group set off on a four-day journey to northern Arizona to visit with two Navajo Presbyterian churches.

“The purpose of the trip, at least as I had tried to get people to acknowledge it from the beginning, was to see some beautiful parts of Arizona which a lot of our people don’t get to see because it’s a long ways away,” Van Arsdale said. “Second, we wanted to begin to understand the ministry of two of our Native American churches, and then third — and I kept repeating this one — to know each other by name.”

Chinle, home to a hospital and many social welfare programs, is a sort of social services headquarters for Navajos. The church is located on a parcel of land given to the Presbyterian Church by the Navajo tribe.

Ganado sits on a piece of land given to the Presbyterian Church by an act of Congress and was a long-time Presbyterian mission project. The community is home to the Sage Memorial Hospital and is centered around health services.

The churches have different approaches too.

“Ganado is very traditional, working mostly with the traditional family structures and doing traditional kind of ministry,” Van Arsdale said. The church is led by the lay pastor, Audrey Jefferson.

“The difference in the Chinle program is that pastor is doing an interesting job of helping them incorporate some of the Navajo tradition like dance and pottery, and some of even their worship practices, into the Presbyterian worship service,” Van Arsdale said. Chinle is served by the Rev. Constance McIntosh.

“They were very well received because we always think about the Navajo bringing art to us,” Van Arsdale said. “Well, we took some to them.”

Many of Chinle’s younger families came to meet the visitors, as did some silversmiths and artists. The evening’s entertainment featured a woman from the church who did a traditional dance.

Ganado treated the visiting Faith members to a rendition of “Amazing Grace” sung by a trio in Navajo.

“Navajo is an impossible language to understand,” Van Arsdale said. “The two pastors have been there for four years and they can’t begin to understand more than short phrases.”

Both churches were happy to speak to their visitors about their programs and ministries. Ganado has a Head Start program, and Chinle’s pastor has rescued a number of young people and families affected by alcohol and abuse.

Both churches also served meals of Navajo tacos, a delicacy made with Navajo fry bread.

With a day to travel to the area, two full and busy days there, and a day to travel back, Faith’s trip was ambitious, but Van Arsdale said the age of the participants wasn’t an issue.

“No falls, no one got sick, no one broke anything. We probably had at least two people who have had open heart surgery and probably a dozen hip replacements. They all said by Sunday they needed their own bed but it went well,” he said.

Perhaps the most important thing is that the trip accomplished every one of the goals that Van Arsdale laid out for it.

“They had a wonderful time and they are looking forward to having representatives from these two churches visit us. That was the whole thing about ‘know each other by name.’ We worked hard at that,” he said. “We’re not going to be perfect at that but at the same time it’s meaningful so we’ll see each other at presbytery meetings and know each other now. I think this could develop into a very significant long-term relationship.”

Toni Montgomery is a freelance writer in Statesville, NC, where she is also secretary for First Presbyterian Church.