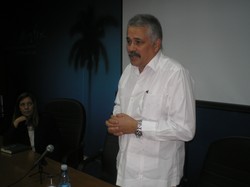 Cuba and the United States have so much in common that despite political differences it’s “overtime” to normalize relations between the two countries, a Cuban foreign ministry official told a group of 15 visiting U.S. religious leaders here Nov. 30.

“When Obama came to power, we went to New York [in conjunction with meetings at the U.N.] thinking that this was a special moment,” Dagoberto Rodriguez, Cuba’s deputy minister of external affairs, told the National Council of Churches delegation. “But more than two years later, the response has been minimal ― increased travel and money transfers are the only progress ― but a tremendous opportunity has been lost.”

Rodriguez outlined a spate of economic reforms in Cuba that have come in the last year: a dramatic cut in the government payroll of approximately 500,000 jobs, the opening up of “self-employment” (individual small businesses and farms), reinstitution of private ownership of cars and houses, and a recently announced program to extend government credit to small business and farm owners.

As a result, he said, “Our economy is growing despite our own difficulties ― our economy is very inefficient ― and disasters ― we had three hurricanes in 2008 that destroyed too much ― and global warming and the global financial crisis.”

Nevertheless, Rodriguez said, “We are trying to accomplish a lot in a short period of time.”

Hanging over all of U.S.-Cuba relations is the 58-year-old U.S. economic blockade/embargo of Cuba. While acknowledging that the complete lifting of the blockade “is a complex political issue,” “small possibilities” would signal U.S. support for Cuba’s economic reforms and willingness to at least address the blockade constructively, Rodriguez said.

Those small “blockade adjustments” could include, he said:

“These are human benefits, not political issues,” Rodriguez said.

Rodriguez challenged U.S. criticism of Cuba’s human rights record. “The whole point of the revolution was to liberate our people,” he said. “We are concerned for our whole people but unfortunately, sometimes the international focus on human rights is strictly individual. We are not perfect, but we’ve been accused based on our political system,” Rodriguez charged.

The 75 dissidents rounded up and jailed in 2003 ― not coincidentally on the day before the U.S. invaded Iraq ― “were not, in our opinion, political prisoners,” Rodriguez claimed. “They were jailed for their actions ― paid by foreign powers to subvert Cuba.” Many were released last year in a deal brokered by the Catholic church.

At the same time, the Cuban government asked the U.S. for a list of “alleged political prisoners, Rodriguez said. “The response was laughable,” he said. “Some on the list had never been in jail and some on the list never even existed. Let’s have a serious and respectful dialogue on human rights.

“There are issues everywhere ― such as the Cuban Five in the U.S. ― but why is Cuba singularized? We are accused because of our political system.”

Rodriguez said Cubans cannot understand why the U.S. government “has not even recognized the economic changes in Cuba. Everyone in Cuba is involved to make life better for our children. This shows that the [economic embargo] problem is very complex and the political machinery in the U.S. is manipulated by a small minority. We do not have the capacity nor desire to be a threat to the U.S. There is no rationality to the U.S. Cuba policy.”

When the blockade is finally lifted, Rodriguez said, “The day after there will be several days of parties in Cuba. We have been patient, waiting 50 years, and we will continue to wait,” he said. “We believe in our basic political system and respect yours. We just want to sit down and resolve our differences. When there’s free and open exchange everyone benefits.”