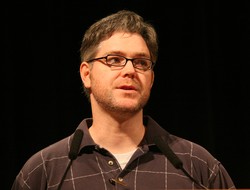 “Church geek” is a label the Rev. Landon Whitsitt says he wears proudly.

And so, when the self-proclaimed “former fundamentalist Baptist turned born-again Presbyterian” and author of the newly published Open Source Church told the annual Moderators’ Conference here Nov. 18 that the Presbyterian Church (U.S.A.) needs to find “new metaphors, new ways of talking about what we’re doing as church,” the gathering of 150 presbytery and synod leaders was ready to listen.

What they probably weren’t ready for was the metaphor Whitsitt ― vice-moderator of the 219th General Assembly and newly elected executive for the Synod of Mid-America ― tossed at them: the online encyclopedia Wikipedia.

“The five ‘pillars’ of Wikipedia are very Presbyterian,” Whitsitt said. “They embody the way God and the new [PC(USA)] Form of Government have told us to behave. The PC(USA) is an ‘open source’ system ― we just need to start acting like it.”

Churches, Whitsitt argued, can be the same way: “They can be open and welcoming, creative and give off the sense that everyone has a sense of ownership; or they can be fairly closed, relying on old saws like ‘We’ve never done it that way before’ or ‘We don’t do it that way here’ or ‘That’s not where the table goes,’” he said.

Wikipedia is the ultimate (at least so far) open source system, Whitsitt said, and its “five pillars” reflect that:

That question of trust is absolutely crucial for the conflicted PC(USA), Whitsitt said. “What some call divided, I call balanced,” he said. “There is truth, but I don’t know it and no one else does, either.

“But God does,” Whitsitt said. “Do we really trust the sovereignty of God?”