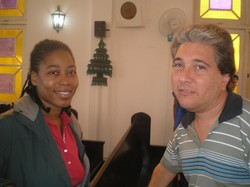 Ask most any higher education student in the United States what their biggest issue is with campus living and the answer will be: the food.

In an interview with the Presbyterian News Service in ― naturally ― the seminary’s comedor (dining hall), Verdecia, a Society of Friends (Quaker) student at this broadly ecumenical school, describes his role as student body president as “mediator between the students and administration.”

Verdecia says another issue for SET students ― one shared by many church-related college students in the States ― is expectations surrounding chapel services, which are held Monday-Thursday mornings. Chapel services, except on special occasions, are student-led.

“Some students don’t think chapel should be every day. Others don’t think it should be mandatory,” Verdecia says. “To be compulsory kind of goes against the spirit of worship.”

On this day, about a third of the seminary’s 40 students are in attendance.

Other issues, Verdecia discusses with SET administrators ― always cordially and respectfully, he says ― are student suggestions regarding curriculum and teaching methods.

There are two forms of Quakers ― Verdecia says: “silent Quakers” and “programmatic Quakers.” North Americans are most familiar with silent Quakers, whose worship is marked by prolonged, at times total, silence. “Cuban and almost all Latin American Quakers are programmatic,” Verdecia says, adding with a laugh, “It is impossible for any Cuban to be silent for very long.”

While there are no ordained pastors in the Society of Friends, Verdecia says, there are leadership positions similar to pastors. However, his calling, Verdecia says, is to be a university teacher or seminary professor.

Hanson attended medical school in Jamaica and is now pursuing her theological degree at SET.

“My vocation is to be a medical missionary, I think,” she says. “God willing, I will be successful in school and can serve somewhere in Latin America.”