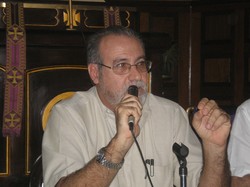 The U.S. blockade of Cuba is a fundamentally theological issue because, in choosing isolation over reconciliation, the U.S. has chosen to serve mammon rather than God, Cuban Presbyterian theologian Reinerio Arce told a theological symposium of Cuban and U.S. religious leaders here Dec. 1

“The blockade and the resulting suffering negates the fundamental biblical tenet that God is the father of us all,” Arce told the group gathered at Luyano Presbyterian Church here as part of a visit by a 15-member National Council of Churches delegation hosted by the Cuban Council of Churches. “The blockade denies the existence of the Holy Spirit, which is the God who inhabits us all as God’s people, by seeking to isolate Cubans from the rest of the world.”

Presbyterian Church (U.S.A.) Stated Clerk Gradye Parsons ― citing the story of the spies in Numbers 13 ― responded that it’s easy to “see that the U.S. is the giant in the story, but the reality is that the U.S. lives like we’re the grasshoppers.”

The U.S. is “strong but fearful,” Parsons said. “We have become fearful of ‘the other’ … and it’s hard to make good decisions when you are afraid.”

Arce thanked the U.S. religious leaders for visiting Cuba and for the ecumenical relationship between Cuban and U.S. churches. “But let’s remember that ecumenism is not to serve the churches but to serve together our societies,” he said. “These are critical times in both countries and we are called as churches to discern the signs of the times, to help people through tough times, proclaiming hope in the middle of anxiety and fear.” 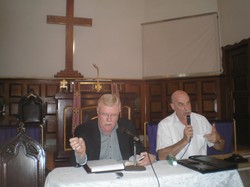 And to seek justice, Parsons added. Referring to Amos 6 ― in which the prophet cried out for justice for the poor of Israel who had been rendered invisible by those in power ― Parsons said, “Someone had to come and speak loudly for justice for those who had become invisible. Our challenge as churches in both the U.S. and Cuba is to make visible what is invisible ― if we cannot see the problem, we cannot understand the problem.”

Cuba-U.S. relations can only be understood through historical analysis, Arce said. U.S. claims to Cuba date back to 1767, when Benjamin Franklin first talked of “annexation” of Cuba by the U.S.  His sentiments were repeated by virtually every U.S. political leader thereafter. As early as 1840, Cuba was described by U.S. leaders as “a ripe fruit that will fall into the hand of the United States.” When Texas was annexed in 1848 the U.S. government declared that Cuba was next.

Even U.S. churches succumbed to “annexism,” Arce said. “Most of the Protestant missionaries who came to Cuba from the U.S. in the 1890s were sent by their ‘home mission’ departments,” he said, “so it was implicit that Cuba would be part of the U.S.”

Ironically, Arce said, “the churches mostly shed ‘annexism’ for cooperation as sister churches beginning with the revolution [in 1959] … there was a tremendous show of solidarity and support between U.S. and Cuban churches.”

Nevertheless, U.S. churches “are just beginning their departure from colonialism,” said Katharine Jefforts Schori, presiding bishop of the Episcopal Church. “We are looking at Acts and beginning a conversation about first century ‘socialism’ that might get us past barriers in both Cuba and the U.S.,” she said, “because we’ll understand that life abundant comes from sharing our resources, not withholding them from each other.” 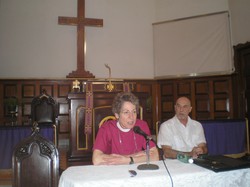 Citing two sayings of Jesus ― “you cannot serve two master” and “you cannot serve God and mammon” ― Arce said, “So for Jesus there was nothing closer to the theological than the economic and political … the cross has only one connotation: to reject Roman injustice and imperialism.”

Cuban theologican Adolfo Ham said both the U.S. and Cuba “have to go beyond the blockade because it is too often used as a scapegoat to avoid responsibility. What the churches in both Cuba and the U.S. have to do is change the mentality in U.S. politics that punishment, not reconciliation, is the most effective foreign policy.”

Parsons agreed. Quoting from Romans 8, he said, “The heart of the Bible message is reconciliation so when the actions of human beings run counter to reconciliation, we are working against God. In the long run human foreign policies and human borders will not stand. When we see injustice through each others’ eyes and get over being fearful people, we can claim our oneness in Jesus Christ and defeat what keeps us apart.”