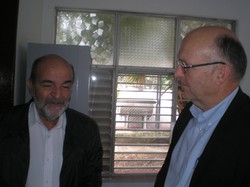 Cuba’s recent economic reforms are “like healing surgery” ― intended to improve but not abandon the socialist principles of the Cuban revolution, a leading Cuban economist told a delegation of 15 U.S. religious leaders here Nov. 30.

His remarks came during a free-flowing discussion with the highest level religious delegation to visit the island nation since the overthrow of the Batista regime in 1959. The delegation included numerous heads of communion of U.S. churches, including Presbyterians, United Methodists, the United Church of Christ, Episcopalians, African Methodist Episcopals, Moravians, Greek and Armenian Orthodox, Church of the Brethren. The delegation was led by the Rev. Michael Kinnamon, general secretary of the National Council of Churches.

The 53-year-old U.S. embargo “is a powerful negative factor,” said Osvaldo Hernandez, an economics professor at the University of Havana and director of the Center for the Study of World Economies here, “but the blockade is not the only cause of our problems. We don’t want to use it as an excuse for our mistakes.”

Since the beginning of the revolution, Hernandez told the delegation, which was hosted by the Cuban Council of Churches, the Cuban state has been built on three social guarantees: free education, free health care and livable pensions for all retired Cuban workers.

“Despite the social improvements” ― illiteracy in Cuba has been eliminated and the Cuban health care system is the envy of much of the world ― “our economic model wasn’t sustainable,” Hernandez conceded.  Cuba has been plagued for years by anemic economic growth, gross inefficiencies and a hefty trade imbalance.

“For many years we viewed socialism as total state activity,” Hernandez said. “The reforms mean that the state should still be active but cannot do everything most efficiently.” Reforms instituted last April include: 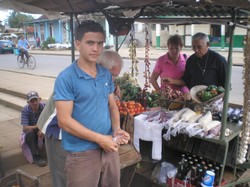 A son and his father at their roadside farm market, a new “self-employment” business that is part of Cuba’s recent economic reforms. —Jerry L. Van Marter

To date, those reforms have created an estimated 300,000 private-sector jobs, including more than 200 small farms, Hernandez said.

Trying to grow self-employment at the same rate as government jobs are eliminated “is a very sensitive problem,” Hernandez said, “because some are too old or infirm for self-employment. We will not abandon anyone ― that is our unwavering commitment to our people ― so we’re doing all this step-by-step.”

The Cuban state also retains central economic planning. “We don’t want market dictation,” Hernandez said, “so small business operates within fiscal limits. Individuals are limited to two houses ― a primary residence and a summer home. We don’t want to suffocate self-employment, but we also don’t want concentration of property and capital or monopolies.”

By far Cuba’s largest problem is food. “We have always depended on food imports and buying food abroad is very expensive,” Hernandez said. “Of course, this is a problem the world over. Global food prices have doubled the last six years.”

The Cuban government “made very big mistakes in agricultural policies during the Soviet period, with large, heavily-mechanized production,” Hernandez admitted. During a recent inventory of agricultural land in Cuba, he said the government was “embarrassed to learn that 50 percent of our farmland was unused.”

The government has responded by offering farmland rent-free to those who will put it back into production. “Private farmers are free to grow whatever they want and to sell it directly at market. We hope to establish a free-price policy with government agricultural enterprises dedicated to highly-specialized items, such as meat and special seed crops.”

As in the U.S., churches play a crucial role in maintaining a social “safety net” for citizens, Hernandez said.  “With limited government capacity, we welcome the contributions of the churches,” he said, adding, “but we don’t expect the churches to assume our responsibility. It is not our intent to abandon anyone.”

Economic planning and reforms are essential despite the U.S. blockade, Hernandez said. “The end of the blockade will be a very important impulse for the Cuban economy,” he said, “but we must not plan for it.”