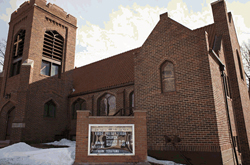 First Presbyterian Church in Sisseton, S.D., is one of a handful in the nation that is participating in a new PC(USA) program called For Such a Time as This. The program pairs rural churches with new seminary graduates in need of a first call. —Photo by Ann Arbor Miller

The Presbyterian Church (U.S.A.), like many denominations, has two challenges: thousands of small churches in need of pastors and hundreds of new seminary graduates in need of a first call.

The solution seems simple: Connect the graduates with churches. And that indeed is the aim of the denomination’s new pastoral residency program designed to serve small congregations and develop missional pastors.

But simple is not always easy. This is an effort whose logic must be accompanied by faith, open minds, financial commitment from the churches and, for several of the program’s first pastors, a tolerance for the bone-numbing cold of a Dakota winter.

Yet, for all those requirements, the program is working. Known as For Such a Time as This, a name drawn from the book of Esther and Esther’s call to serve the dispersed people of God, the program dispatched six ministers to rural churches in 2010, its inaugural year. They went to North and South Dakota, Mississippi and Missouri.

This year, the program is preparing to send three times that number, and requests for ministers are growing faster than the supply. The deadline for the 2011 program, which will include presbyteries in Missouri, Kansas, Georgia, South Carolina, Florida, Ohio, North Carolina and West Virginia, is March 15.

The need is great in the PC(USA). Half of the denomination’s more than 10,000 congregations have 100 or fewer members.

“We’ve had to turn down some churches. We had more than we could select,” said the Rev. Marcia Clark Myers, director of vocation for the PC(USA), which has oversight of the program. “The word is spreading, and we’re getting more inquires every day.”

The joy of the small congregation

Mark Terayama, a member of the first class of pastors, knows the gratitude of small congregations. An American of Japanese descent and a native of Seattle, Terayama, 37, moved his wife, Denise (who is Chinese-American), and three young children to South Dakota to serve the First Presbyterian Church of Sisseton and the nearby Presbyterian Church of Veblen. In Veblen, he preaches to about 15 or 20 people on Sundays. In Sisseton, the Sunday service draws about 50. The churches have not had a full-time pastor in about 10 years.

“People have been very supportive and grateful that we’ve been willing to move out here and learn about them and minster to them, and they are willing to learn about us,” he said. “It’s a nice conversation that we’re having.”

Pat Dady, a member of the First Presbyterian Church, said the new pastor teaches his church members Japanese words and is adjusting to the local culture.

“Mark, in addition to being a committed minister of God, is a bright person,” Dady said. “He explains some of the cultural differences of where he comes from. He says us South Dakotans are a kind of forward people and he and Denise are a little reserved, but he says, ‘This is going to work out.’”

Rural life has had its surprises for Terayama, a man of modest height who finds himself among tall South Dakotans who favor boots and cowboy hats. When the Terayama family moved in, a resident came by to welcome them bearing, not a pie, but a pheasant. Terayama, who has a degree in molecular biology, took a ride on a harvesting combine and was amazed at the level of technology on board.

And when he preaches using one of the rural images of the Gospel parables, he realizes it’s more than an image to the farmers and ranchers in the pews.

Sisseton is within an “open reservation” that is home to combined bands of Native Americans known as the Sisseton-Wahpeton Oyate. Terayama’s first funeral was for a Native American infant, which he conducted jointly with a tribal elder. At the burial, they stood in the bitter cold as Native American drummers played, the elder sang “Amazing Grace” in the Dakota language and family members dropped handfuls of black plains soil into the grave holding the small coffin.

The change in culture and in climate -- in winter, South Dakota’s low temperatures are routinely well below zero -- might shock less-dedicated newcomers. But Terayama accepts the changes as part of a true ministry.

“If we are really trying to follow God’s call into ministry, my perspective is he could call us anywhere,” Terayama said. “If we don’t have our eyes open to different areas, we’re not open to that calling.”

New graduates with Terayama’s openness aren’t the norm, said Myers, the director of vocation. And there begins the supply-and-demand problem that For Such a Time as This is trying to solve.

The PC(USA) faces the same dilemma as other mainline denominations: Most seminarians come from suburban and urban settings, grew up in larger churches and expect that they will serve in a similar church.

This is a nationwide trend. The National Congregations Study found that the median congregation has only 75 regularly participating people and an annual budget of approximately $90,000. Ninety percent of all congregations have 350 or fewer people. But even though there are relatively few large churches, they contain most of the churchgoers. So the average person is in a congregation with 400 people and a budget of $280,000.

But larger churches want experienced ministers, leaving many graduates with student-loan debt unable to find work in a church that can afford to pay them an adequate salary. A recent survey of PC (USA) ministry vacancies, for example, found 128 churches that would accept people new to the ministry, while there were 385 graduates seeking their first call.

Meanwhile, small churches in rural areas often lack both the appeal and the funds to attract ministers at any level of experience.

“Part of what we’re seeing is a leadership mismatch of people who want to serve in larger churches in urban areas with larger salaries,” Myers said. “That’s not what we need. We’re looking for people who are mobile.”

That search led to the germination of an idea during discussions among the national church leadership in 2007. The idea was to create a ministry version of Teach For America, in which college graduates commit to teach for two years in schools in low-income communities. There was even an early notion to call the program Preach For America, before For Such a Time as This won out.

“The concept was like Teach For America,” Myers said. “We wanted to challenge people who were new with a vocation to go to a place of great need.”

But the first need the program had to meet was its own funding. That was solved by a family foundation that gave an anonymous donation of $450,000 to get the program launched and to support it for two years. After that, it will have to find new funders or a way to be self-sustaining.

The initial grant covers the program’s administration and some of the ministers’ costs, but all churches that participate must come up with funds to meet the PCUSA’s minimum regional salaries for ministers, which range from $36,000 to $55,000.

Marilyn Johns, coordinator of For Such a Time as This, said the commitment by the new ministers -- they agree to serve a minimum of two years -- and the challenge to small congregations to meet a minimum salary create a mutual bond.

“It really is a step in faith for everybody,” she said. “The church is investing a lot of money and the pastors are investing their life for the next two years.”

Trudy Dumont, sent by the program to pastor the Presbyterian Church of Rolla and St. John Presbyterian, both in Rolla, N.D., said she is glad she took the long journey of faith from her last home in Los Angeles to the deep cold of the upper Plains.

“They had to take a risk, in hiring a first-call pastor. And I had to take a risk, going to a land I had never known before,” Dumont said. “Like Abraham and Sarah, I know what it is indeed like to ‘leave your country, and go to a place that I the Lord will show you.’ But this country is gracious and gentle and outrageously warm, even in these 20-degree-below-zero days.”

The mutual risk also underscores a defining element of the program. It’s not about charity. It’s about opportunity. New pastors get a chance to acquire experience. Small churches get a chance to see if they have the resolve to be viable and then perhaps vibrant centers of faith.

“Because we’re not giving [the churches] a ton of money, we’re not really saving anybody,” Johns said. “We’re giving them a chance for two years.” If it doesn’t work out, she added, “then churches will face some hard decisions.”

Clay Smith, a Methodist minister with experience in closing the gap between the seminary and small churches, said the Presbyterian program made a shrewd choice by giving churches a chance rather than a subsidy.

“I was an advocate for the small-membership church, but I never felt that that means keeping every single one going,” he said. “I think you have to be selective and choose the congregations that you think have a chance.”

At the Hinton Rural Life Center in Hayesville, N.C., Smith directed a multidenominational program funded by Lilly Endowment Inc. called the First Parish Project.  It sought to connect new seminary graduates with smaller churches in both urban and rural settings.

Smith said the project didn’t discover a way to end the struggles of small churches, but he said the young ministers who participated found their vocations strengthened by the experience.

“We didn’t come up with an answer,” Smith said, “but one of the things the young clergy said of the First Parish Project was that it saved their ministry.”

For Myers, For Such a Time as This offers a similar invigorating effect by putting ministers in a new environment.

“A lot of people raised in large churches haven’t experienced these kinds of communities, and once they do, they find they fall in love with it. We think that pattern will follow. We’re hoping some of these people will settle into rural ministry,” she said.

Myers isn’t a stranger to the effect. She studied at Princeton Theological Seminary, but she learned how to do the work from the people she served in the coal fields of West Virginia for 20 years.

“Princeton gave me an education,” she said. “The people of West Virginia told me the things I needed to know to be a pastor.”

Used with permission of Faith & Leadership, Copyright 2011. All rights reserved.

Tags: for such a time as this, vocation