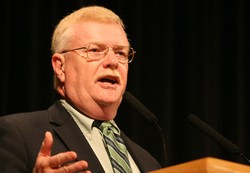 The Reverend Gradye Parsons, Stated Clerk of the General Assembly of the Presbyterian Church (U.S.A.), issued the following statement in response to the bombing in Jerusalem today:

We have received word today of the detonation of a bomb near a bus stop in the city of Jerusalem. At least one death and numerous serious injuries are being reported.

We condemn this act of violence and the hatred out of which such acts spring.

On behalf of the Presbyterian Church (U.S.A.), we call all people of good will to pray for those who have been victimized by this deadly act, and we renew our petitions to God to help us find a way to facilitate a future of peace in the region.

We recognize that this is not an isolated incident, but reflects the culture of violence that has troubled relationships between Palestinians and Israelis for so long. We urge swift action to identify and punish the perpetrators of this heinous act. We also urge all parties to refrain from using this incident to further escalate the cycle of violence and repression affecting both Israelis and Palestinians.

Every such incident reminds us all of the urgency of the quest to find common ground on which peace can be built.