Home News Percolating on the meaning of ‘call’

Percolating on the meaning of ‘call’ 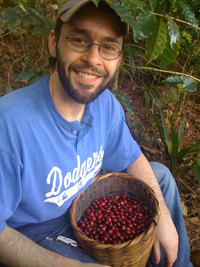 “I’m still trying to figure it out — How does seminary and a master’s degree and teaching fit with roasting coffee and sourcing it and selling it?” wondered Benjamin Schellack. “I’m not sure I know the answer.”

Schellack, in addition to being a student at Princeton Theological Seminary (though on a leave of absence), is also the founder and owner of Old Queens Coffee Company (O.Q. coffee co) in New Brunswick, N.J.

Schellack didn’t set out to become a coffee roaster — he didn’t even like coffee not that long ago. He was pretty much set on getting a Ph.D. after he finished a year of study at the Gregorian University in Rome.

When Schellack returned to the United States, he needed to decide where to live. Rather than base that decision on school, a job or family, he decided to move somewhere where he could “center around a community of believers.”

That community wound up being Jacob’s Well, a church plant in New Brunswick.

To make ends meet while in seminary, Schellack worked at a local Starbucks, but he was upfront about taking the job for the hours and benefits, not the coffee.

But one day, he happened to be in New York City’s Café Grumpy where, under some urging, he tried a shot of espresso.

“I tried it and it was amazing — why is this so good, and why have I not had it before?” Schellack said.

After finding that coffee could taste great, Schellack also realized that it has a drawing power — people gather around a space where there was coffee.

But while Schellack was having this sort of coffee awakening, he was also a full-time seminary student.

“I realized that if I wanted to do something with this interest in coffee that it would take some investment on my part — but that was the money I was going to use for school,” he said. “In January of last year I made the decision to get the roasting company off the ground.”

In spite of the detour from seminary, O.Q. coffee co is not a distraction from Schellack’s calling but an integral part of it.

“I certainly think that God gifts people in various ways and calls people to different places and to do different things,” he said.

Part of what took him from Rome to New Jersey was a strong desire to be committed to a place and to be there for a long time.

“In America, where we move so much, it is easy to slip through so many different communities and never ground yourself anywhere,” Schellack said. “I saw an opportunity to be committed to New Brunswick, to really love the city.”

For the moment, that commitment is being worked out through roasting and sourcing coffee.

The focus on coffee does not mean that Schellack’s passion for teaching is on the back burner.  With all of the information and misinformation surrounding coffee, he’s found plenty of opportunity to teach in his new field.

With the typical coffee maker used in most American homes, Schellack said, “you are using a lot of mechanical devices to get something faster and easier” but not necessarily tastier. With manual machines, such as those used at Café Grumpy where Schellack had his vocation-altering first shot, there is much greater control over the process, which demands a better trained barista but provides a better result.

This interest in and passion for coffee at its most delicious has lead Schellack from Honduras to Haiti, meeting with local growers and seeking out coffees that are in season.

“In Haiti, they have all these old coffee trees leftover from the French that they were mainly using for the local market,” he said.

But Schellack found a Haitian coffee company that buys the beans from local farmers, exports them and then uses the proceeds to support widows, orphans and churches.

“When we are buying from them we are supporting an organization that is doing that gospel work — these are the kind of opportunities that we love and we look for whenever possible,” Schellack said.

On a trip to Honduras, he spent time with farmers and found a coffee he liked and hopes to buy each year. Though he plans to continue visiting them, he hopes that the farmers might be able to make a trip to New Jersey as well.

“There is a sense of relationship developing in an industry that is otherwise commoditized and traded — you have no idea where it comes from and that the price you pay impacts someone down the line,” Schellack said.

As for seminary? Schellack still doesn’t know for sure how his various ‘callings’ will come together. His leave of absence is up soon, but his passion for coffee doesn’t seem to be waning.