The Rev. Walter Soboleff, one of the first Alaska Natives ordained to ministry in the Presbyterian Church (U.S.A.) died May 22 in Juneau, Alaska of bone cancer and prostate cancer. He was 102.

In October 2008, this reporter ― who served with Walter on the board of trustees of Sheldon Jackson College in Sitka, his alma mater ― interviewed Soboleff at length during Alaska Presbytery’s celebration of his 100th birthday.

The full text of that story:

SITKA, Alaska — Walter Soboleff feels a particular kinship with Old Testament patriarch Abraham. “Go from your country and your kindred and your father’s house to the land that I will show you” — that famous summons from God into an unknown future recorded in Genesis 12 — resonates deeply in Soboleff’s life and spirit. 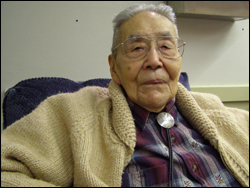 Today (Nov. 14), Walter Soboleff turns 100. His journey of faith from the now-extinct Alaskan village named Killisnoo where he was born in 1908 to this day, when he is one of the most revered leaders in Alaska, is the stuff of sprawling saga that only James Michener could write. In fact, you could probably catch glimpses of Walter Soboleff in Michener’s acclaimed novel, Alaska.

During his remarkable life, Walter Soboleff became the first Alaska Native ordained to the ministry in the Presbyterian Church, the first preacher in Alaska to have his sermons broadcast live on radio, the co-founder of the first Alaska Native organization to work for the preservation of native language and culture. He is, today, after nearly 70 years of ministry, arguably the spiritual leader of Alaska’s Native community.

Soboleff’s grandfather, John, migrated to Alaska when it was still owned by Russia. John, a Russian Orthodox priest, baptized Walter in the little Russian church in Killisnoo on the southeast Alaskan mainland. The town was inexplicably abandoned in 1928.

Walter’s father, Alexander Ivan Soboleff, married a Tlingit woman, Anna Hunter. When Alexander died at a young age and widowed Anna was unable to care for the family, she sent Walter to a Russian Orthodox boarding school in Sitka. This city had been the provincial capital of Alaska before the U.S. purchased it from the Russians in the mid-nineteenth century.

The school’s financial support from the motherland dried up shortly after the Russian revolution in 1917. So Walter moved up the street to Sheldon Jackson School (now college) where he lived and studied from 5th grade through his high school graduation in 1928. He became a Presbyterian in 1921.

“There was no dissatisfaction,” Walter says. “I had been a [Russian Orthodox] altar boy and it was fun. Becoming Presbyterian was just one of those things.” 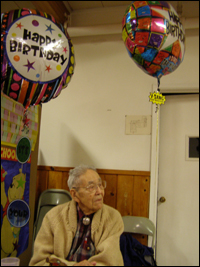 Walter Soboleff enjoys the 100th birthday party thrown for him by Alaska Presbytery on Oct. 18 in Sitka, Alaska.

The seeds of his call to ministry were planted by Jackson L. Webster, who taught theology at Sheldon Jackson School. “There were only two of us in the class,” Walter recalls. “Mr. Webster saw the possibility of me becoming a clergyman. I told him I’d think it over. Three months later I told him I’d give it a try.”

Walter was offered a “full ride” to the Presbyterian Church’s University of Dubuque. “This was during the Depression and very few in Alaska, especially Natives, were in college at that time.”

During his college years, Soboleff could seldom afford trips back home to Alaska. “It got a little easier when I was in seminary (also at Dubuque) because seminary students could travel on the Northern Pacific railroad for a penny a mile.” During his second year of college Walter managed to save enough money from odd jobs to buy a ticket on a freighter from Seattle to Sitka. “So I hitchhiked from Dubuque to Seattle … now THAT was an adventure.”

Though thousands of miles away from his beloved Alaska, Walter says he experienced very little homesickness. “The campus had a strong Christian atmosphere and that was helpful,” he recalls. “And I made it my business to go to church every Sunday.”

He describes his first two years of college as “a new world with new ideas opening up.” He confesses that he went through periods of doubt — both about his Christianity and about being so far from home. “But simple faith is so powerful,” he says.

Upon graduating from seminary in 1940, Soboleff, who had already established a reputation in the Midwest as a spell-binding preacher, turned down a number of pulpit offers in the lower 48 and returned home as pastor of Memorial Presbyterian Church in Juneau, a new church sponsored by the Board of National Missions.

“Memorial Church was a mission to the Tlingits, because racial bias was so great that non-Natives wouldn’t welcome Natives in their churches,” Walter says.

Memorial Church had struggled for a number of years — had been without a pastor for two years before Soboleff came — “so the elders agreed to open the church to anyone who wanted to come, and all kinds of people started to attend!” Walter says. “No one could imagine an integrated church in Alaska!”

In 1947 a local radio station began broadcasting Memorial Church’s worship services — another first in Alaska — and soon Soboleff developed a devoted following that reached far beyond the walls of his tiny sanctuary.

After overcoming segregation in his congregation, Soboleff trained his sights on the bigger problem, helping to found the Alaska Native Brotherhood, which eventually prodded the Alaska legislature to pass statewide anti-discrimination laws.

Over the next 30 years, Soboleff worked tirelessly to expand the anti-Native discrimination gains into programs throughout the state to honor and preserve Native Alaska language, art and culture. In 1970 he moved to Fairbanks, where he started the first Alaska Native Studies Department in the state at the University of Alaska-Fairbanks.

“It was a far cry from 1904, when the Federal government banned Native identity programs,” Walter says.  “After that the Tlingit culture went underground, because Natives didn’t want to lose their identity.”

Interest in preserving Native culture continues to grow, Walter says. “The high schools and colleges are teaching language and art — there is great appreciation for Native culture and people.”

Soboleff was crushed when, in 1962, Alaska Presbytery and the Board of National Missions decided to close Memorial Presbyterian Church. “I never knew why,” he says wistfully. “It was a flourishing little church. The members fought it, but it was a losing battle.”

Further adventures were awaiting. For the next eight years, Soboleff plied the frigid waters of Alaska’s intra-coastal waterways as a “traveling evangelist” on two small ships. These “floating sanctuaries” — the Princeton Hall and then the Anna Jackman — were owned by the Presbyterian Church.

The floating ministry regularly visited between eight and 10 remote village churches, bringing a teaching, preaching and sacramental ministry to the furthest reaches of Alaska. The ships also visited marine stations and logging camps and during the summers conducted vacation Bible schools in villages that were only accessible by sea.

“The workers in the camps appreciated our efforts to minister with them,” Walter says, “and, oh, those young people, how they loved to see us coming to teach them the Bible!” 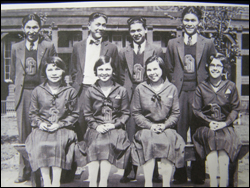 Improved educational opportunities are the most significant development Soboleff has seen in his beloved Alaska during his lifetime. “Our young people are so much better educated than when I was one of few Natives in college,” he says. “We have Native doctors, lawyers, educators, political leaders — it has made our people so much stronger.”

Such growth is not without its challenges for the church, however. “The government and the Native corporations have drained a lot of our leadership into the corporate world, which is good, I guess, but we have problems of leadership in the spiritual world,” Walter says. “On the other hand, we have Native leaders who are active in our churches, and that’s good.”

After 100 years Soboleff has few regrets. The only one he’s willing to mention is “that I haven’t won more people to Jesus. It makes my Easter when I can lead someone to Jesus during Lent,” he says.

“If each person would challenge himself or herself to lead just one person to Jesus each year, the church would double!” Soboleff says. “But too many people think it’s the preacher’s job when we all KNOW it’s each Christian’s job.”

Soboleff is still very active. He travels regularly between his home in Juneau and Sitka, where his wife lives in a nursing home. He preaches regularly and is a fixture on radio and television, interviewed constantly on radio and television and quoted in the newspapers, fiercely defending Native Alaskans rights and culture and gently calling people to forswear the material for the sake of the spiritual.

For 100 years that faith has propelled Walter Soboleff. “It’s Jesus that makes these things happen,” he says. “And whatever Jesus has made me do makes me feel so good.”