The Reverend J. Herbert Nelson is arrested in protest over debt ceiling negotiations 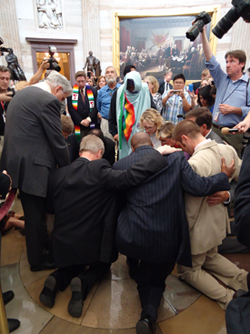 Religious leaders kneel in the Capitol Hill Rotunda to pray for a just and compassionate budget. —Photos by Matthew Dimick

The Reverend Dr. J. Herbert Nelson, Director of the PC(USA) Office of Public Witness in Washington, D.C., together with nearly a dozen other religious leaders, was arrested this afternoon in the U.S. Capitol Building while engaging in prayer and civil disobedience.   Frustrated that their pleas to the Administration and Congress to protect funding for the nation’s most vulnerable people are being ignored, the leaders refused to end their public prayers for an equitable resolution to the debt ceiling debate, despite repeated warnings from the U.S. Capitol Police.

As the August 2nd deadline approaches, negotiations to raise the federal debt ceiling seem to have reached a stalemate.  The PC(USA) Office of Public Witness, along with interfaith partners in ministry, is indignant that, in order to break that stalemate, spending cuts to programs that serve the most vulnerable in the U.S. and around the world will likely be included with an increase in the nation’s credit limit.  The PC(USA) has expressed grave concern about the nation’s mounting debt and deficits.  The PC(USA) General Assembly shares elected officials’ concern at leaving to the next generation a legacy of debt, but neither does the PC(USA) support leaving behind a legacy of poverty, neglect, and underinvestment. 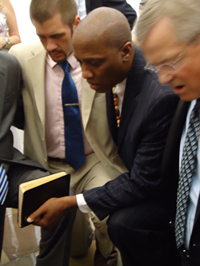 After Stated Clerk Gradye Parsons, accompanied by Reverend Nelson, met with Congressional leadership and staff earlier this week, it became clear that Members of Congress themselves have little hope and do not know how this impasse will come to an end.  But both possible scenarios present dire consequences.

On the one hand, Members of Congress may come to an agreement to increase the debt ceiling, but it will certainly include severe spending cuts to the programs and services that support the poorest and most vulnerable people living in the U.S. and around the world.  On the other hand, Members of Congress may not come to an agreement by next Tuesday, at which point the U.S. will begin to default on its financial commitments for the first time in its history, resulting in increased hardship for the poor and untold national and global economic consequences.  In either case, the poor and vulnerable will bear the overwhelming and disproportionate burden while those who can afford to pay more escape additional sacrifice. 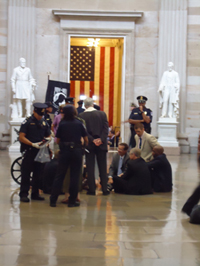 Joined by Presbyterian ministers Jennifer Butler, Executive Director of Faith and Public Life, and Michael Livingston, past-President of the National Council of Churches, Reverend Nelson led religious leaders in prayerful civil disobedience, kneeling down in the Capitol Rotunda to pray for a debt ceiling deal that does not sacrifice the poor on the altar of political ideology.  His participation was a matter of personal conscience and public witness.  He said, “We are in a political quagmire. Due to the inability of the Congress to work together, the good of people across the globe is being compromised by the self interest of our political leaders. I am convinced that this is not the fault of Republicans, Democrats or Tea Party members alone. Too many Congresspersons of all parties are trapped in a space where commitment to the common good is diminished for the sake of personal gain and the seduction of power. In this process, the American people and others all over the world are left to suffer.  Our denomination cannot stand idly by and watch while the mandate of the gospel to love our neighbors is violated in the halls of Congress.”