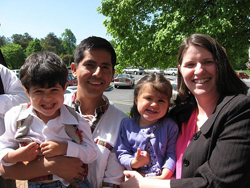 Noe Juarez – pictured with wife Laurie and children Paul and Ella – serves the Sunset Presbyterian Church, Fort Lauderdale, Fla., through For Such a Time as This. —Photo courtesy of Noe Juarez.

Ten recent seminary graduates have received their first calls to ministry in the second year of For Such a Time as This, an innovative pastoral residency program designed to renew the  Presbyterian Church (U.S.A.) by equipping new pastors to grow small churches Deep and Wide in evangelism, discipleship, servanthood and diversity.

Launched by the General Assembly Mission Council in Fall 2009, For Such a Time as This: A Small Church Residency—Growing Leaders, Growing Churches is a timely and innovative program that pairs small, underserved congregations with recent seminary graduates in a two-year pastoral residency relationship. One of the program’s unique and essential features is that each pastoral resident receives the support and guidance of a network of pastor/mentors, presbytery, and national church leaders.

Named for a reference from the book of Esther, For Such a Time as This: A Small Church Residency—Growing Leaders, Growing Churches deliberately invokes Esther’s unexpected rise to leadership in her own day even as the PC(USA) is calling forth leaders to serve in a rapidly changing and challenging 21st century context, in which about 4,000 of the denomination’s over 10,000 congregations average less than 50 people in attendance each Sunday.

The Rev. Gregory Goodwiller, executive presbyter and stated clerk of the Presbytery of St. Andrew, Oxford, Miss. – in which two members of Class of 2010 are currently serving – said, “The For Such a Time as This program is ideally suited to our needs, and addresses a long-standing issue in our denomination by making ministry in smaller and less urban settings more enticing to new seminary graduates.”

The presbyteries of Heartland, Tropical Florida, Western North Carolina, West Virginia and Northeast Georgia/Charleston-Atlantic – the latter two contiguous presbyteries working in partnership – compose the program’s second group of ministry settings for 2011.  In order to qualify as partner presbyteries, each was asked to identify several small churches that would serve as especially good learning settings for first call pastors. The residency settings were selected in January.

Applicants for the Class of 2011 submitted a Personal Information Form (PIF), sermon, references, and answers to questions which were evaluated in April.  The selected finalists were then referred to the participating presbyteries for consideration by the Pastor Nominating Committees of the program’s identified congregations.

The pastoral residents – listed with their calling congregations and partner presbyteries – are:

Following a comprehensive orientation to be held here from August 22 – 25 – during which the new pastoral residents will be commissioned – the members of the Class of 2011 will serve their respective churches as pastors for a designated two-year term. All of the ministry positions are full time and will be compensated in accordance with presbytery guidelines.

“After visiting with several members of our pastoral residents from the Class of 2010, I am more convinced than ever that we need to be doing this program,” Myers said. “In less than a year, we are already seeing the fruits of ‘miraculous’ growing ministries. As the program is strengthened by this gifted and diverse new class of pastoral residents, the possibilities are exciting.”

Since the orientation of the 2011 class will overlap with a midpoint event for the 2010 class, members of the inaugural class will also have an opportunity to share their learnings and insights with the new pastoral residents.

“If you want to find out what you’re made of, the small church is the place you can find out,” said the Rev. Michaele Wood, pastor of First Presbyterian Church, Pontotoc, Miss., a member of the Class of 2010.  “This program is something that we need to support or we need to quit complaining about the decline in membership, because this is something we can actually do to change that.”

Amalie Ash, presbytery administrator for the Presbytery of Tropical Florida – which has already welcomed two pastoral residents from the Class of 2011, Noe Juarez and Ce Ce Armstrong – said that she has already experienced a foretaste of the program’s positive impact.

“On Sunday, July 24, I attended Sunset Presbyterian Church to hear Noe Juarez’s first sermon,” said Ash. “As I sat in the pews, I could not stop smiling. Noe is a gift to this church.”

Ash noted that when she attended the Sunset Church there were approximately 35 people in the English-speaking service with eight in the choir. She found the excitement of the church’s members – both English and Spanish speaking – to be palpable. “Noe gave a strong, encouraging sermon,” Ash said. “In fact, the first time that he visited the church he picked up a guitar and played a song for the Spanish congregation. I am confident that this congregation will grow and would like to thank everyone for their hard work and commitment to make this program happen.”

Ash’s enthusiasm is also shared by Juarez, who posted the following on his Facebook page: “Grateful to God and my new friends at Sunset Presbyterian in Fort Lauderdale, who made my first Sunday here the best worship service experience. Today [July 26] was my first day at the office as a pastor. What a privilege and blessing!”

Marilyn Johns, D.Min, coordinator for For Such a Time as This, commends “these excellent candidates who were willing to step out in faith and go where they were needed,” often to locations in small towns at minimum salaries.

“We are excited and encouraged by these new pastors and the gifts they bring,” said Johns, “and we look forward to encouraging stories ‘from the field.’”

For Such a Time as This: A Small Church Residency—Growing Leaders, Growing Churches is currently seeking gifts to allow the program to continue to help grow Christ’s church deep and wide by reenergizing and renewing our small congregations. Visit the website for further information on to make a gift online.