Alive with a new hope 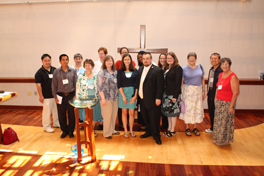 Members of the Classes of 2010 and 2011 gathered in the chapel following the commissioning service. — Photo by Ken Meeks

Since he became pastor of the 33-member Lavonia (Ga.) Presbyterian Church on July 15, Jason Clapper has been out every day knocking on doors.

Clapper is one of ten recent seminary graduates who have received their first calls to ministry in the second year of For Such a Time as This, a pastoral residency program designed to renew the Presbyterian Church (U.S.A.) by equipping new pastors to grow small churches Deep and Wide in evangelism, discipleship, servanthood and diversity.

The ten members of the Class of 2011 gathered here from August 22 – 25 for a comprehensive orientation program, during which they were commissioned for service in small congregations in the program’s partner presbyteries of Heartland, Tropical Florida, Western North Carolina, West Virginia and Northeast Georgia/Charleston-Atlantic. The six members of the inaugural Class of 2010 were also on hand to celebrate and to pray for their new colleagues and participate in their own midpoint informational and sharing session at the Presbyterian Center.

“I think that overall the thing that has been best for me this week was meeting my peer group and getting in contact with other people who are called to small church ministry,” Clapper said. “I was also excited to see what’s been happening with last year’s pastoral residents, hearing their success stories, and being encouraged by that.”

Clapper, who was raised in a small church, said that his pastor had a “huge influence and impact” on his life. “God has placed a love in my heart for small congregations,” he said. “I want to be part of this experience because God has called me to this time and this place to be a minister of the gospel. I feel that this program will help me to grow into this call.”

Launched by the General Assembly Mission Council (GAMC) in Fall 2009, For Such a Time as This: A Small Church Residency—Growing Leaders, Growing Churches is a timely and innovative program that pairs small, underserved congregations with recent seminary graduates in a two-year pastoral residency relationship. One of the program’s unique features is that each pastoral resident receives the support and guidance of a network of pastor/mentors, presbytery and national church leaders, all of whom participated in the orientation.

“Because I was worried that small church ministry was going to be a lonely endeavor,” Clapper said, “I am excited to be in relationship with people across the whole church.”

Named for a reference from the book of Esther, For Such a Time as This deliberately invokes Esther’s unexpected rise to leadership in her own day even as the PC(USA) is calling forth leaders to serve in a rapidly changing and challenging 21st century context, in which about 4,000 of the denomination’s over 10,000 congregations average less than 50 people in attendance each Sunday.

To prepare for the challenges of their new calling in rural, small town and inner city settings, orientation participants worshiped together, built community, and were briefed on a broad variety of topics and ministry resources, including small church dynamics, nurturing practices of spiritual disciplines, how Emotional Intelligence affects ministry, and pastor/mentors received coaching skills training. 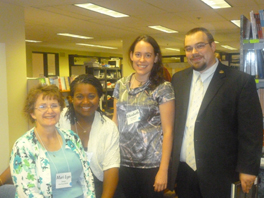 “Our world yearns for good news and we have thousands of small churches dotting the landscape which have the potential to be mission stations,” said the Rev. Dr. Marcia Clark Myers, director of the Office of Vocation – a shared ministry of the GAMC and the Office of the General Assembly (OGA) – which oversees the For Such a Time as This program. “They need leadership that can help them reach outside their walls and live out the call to ‘Grow Christ’s Church Deep and Wide.’ The leaders whom we seek and whom God has called to this exciting ministry are uniquely gifted with a deep commitment to Jesus Christ, a passion for spreading the good news of the gospel, humility of spirit to learn, and appreciation of the gifts of small congregations. Those qualities shine in those who have been called to serve in this program.”

In his sermon based on Hebrews 11:13-16, “Yearning for a Better Country,” delivered during the orientation’s powerful commissioning service, the Rev. Thomas Hay, director of Operations for the OGA, opened with an amusing but telling anecdote about his attempts in mid-life to exercise his brain by learning Spanish. His largely positive experience at language learning culminated in an aborted attempt in Valparaiso, Chile, to board a train on which he had failed to correctly interpret the sign on the train’s door that read, “Touch the button to open.”

“You who are about to enter into pastoral ministries have an important door in front of you,” Hay told those to be commissioned. “How do you go forward?”

“Hebrews would tell us to begin simply by not looking back – not in anger, not in nostalgia, not in any way to look back – but instead to move forward…Friends, on this important day, I join with the author of Hebrews telling you that you stand before an important door and I urge you to ‘touch the button.’”

Among those presbytery leaders looking forward to important doors being opened is Amalie Ash, presbytery administrator for the Presbytery of Tropical Florida – which welcomed two pastoral residents from the Class of 2011, Noe Juarez and CeCe Armstrong.

“As a presbytery administrator, I came to the orientation thinking I was just going to be an observer to the program to know what the residents were doing,” Ash said.“But the information has been so rich, so deep and so broad that I got things that I can use for the presbytery. One of my personal dreams for this program was to glean information that would be exponentially used throughout the presbytery and that’s actually a reality to me now right out of the gate.”

For Such a Time as This: A Small Church Residency—Growing Leaders, Growing Churches is currently seeking gifts to allow the program to continue to help grow Christ’s church deep and wide by reenergizing and renewing our small congregations. Visit the website for further information on to make a gift online.