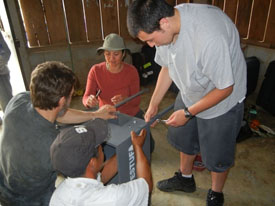 A group from Marine View Presbyterian Church assembles a stove in the home of a Guatemalan villager. —Photos courtesy of Hands for Peacemaking Foundation

A simple stove, some books, pictures and a video.  These things might not seem like much, but that’s all it took to bring together two very different groups of people.

This June, 14 members of Marine View Presbyterian Church in Tacoma, Wash., went on an annual mission trip to Guatemala. They worked with an organization called Hands for Peacemaking to install stoves in the homes of Mayan villagers.

Hands for Peacemaking was founded by a physician and his school teacher wife 25 years ago after the doctor worked in Guatemala as part of the National Guard. He fell in love with the people and the area and stayed to establish a clinic and a school. The organization has stayed in the same location working with 252 Mayan villages in the Santa Cruz/Barillas area in the northwest highlands of Guatemala.

Hands for Peacemaking is one of the few organizations working in this area and has staff that helps provide services to the villagers year round. Every year from March through July the organization invites groups to participate in projects with the villagers.

“We usually have four to eight groups a year that come down and experience life as it is in rural Guatemala,” said Pete Kinch, executive director of the Hands for Peacemaking Foundation. “Most organizations that work in Guatemala are predominantly around Guatemala City/Antigua area. We are about 14 hours of hard driving up into the mountainous area, about 30 miles from the Mexican border, so it’s not a simple journey.  It’s one that requires a real dedication and a lot of love and a lot of commitment.”

Marine View definitely has that love and commitment to the people of Guatemala, as evidenced by the 20 years it has made the difficult trip to this remote region.

“They have been extremely faithful and certainly have made an impact with the people of that area in many different ways,” Kinch said.

After a two and a half day journey, the team arrived in the village of Sacchen, where volunteers would install 62 stoves in villagers’ homes. Hands for Peacemaking staff members had delivered the stove kits the week before, and villagers had already taken them to the homes, so team members got straight to work.

Hands for Peacemaking uses Aller Stoves, which are safer, cleaner and use less wood than the open fire pits villagers used previously.

“Each team consisted of four members from Marine View and then one villager to act as our guide and helper,” said Doug DeVries, a member of Marine View. “So when we’d get to the house we would get the stove kit and get all the parts and components opened up and then we would assemble the stove in the home.”

The benefits of the stoves were obvious as soon as volunteers saw the villagers and their homes.

“There were a lot of people who you could see where they had burn injuries from living and working with an open fire in their house,” DeVries said. “You go into some of these houses and the roof is absolutely black from the smoke. The respiratory issue was huge so that problem now goes away. The burn injury issue for all intents and purposes goes away because the stove is so well insulated that even with a full fire inside it, the cook top is hot but the stove itself is only warm to the touch.”

One team climbed up a steep mountainside to get to a home with a stove kit and found a mother with a severely physically and mentally disabled five-year-old son. Because they feared he would fall into the open fire pit, the family had to keep the boy in a wooden box for his safety.  They expressed their gratitude to the team installing the stove for making their home safer for the child.

The new stoves also burn 65 percent less wood than the open fires to generate the same heat and cooking capability. When using a fire pit, village women and children spend much of the day gathering wood. They have to go farther and farther because the wood is becoming less available. The new stoves will not only lessen the burden on the environment but free up time for villagers, especially women.

“By freeing that time up and giving them the ability to pursue other alternatives, many of them pursue an education,” Kinch said.

They also have time to devote to things like making crafts to sell in the market, generating more income for the family.

“We did the home of a gal who made purses, hand stitched purses, and so you can just see, if she had an extra two hours a day, if she could make an extra four purses per week and you run that out, that’s 200 purses a year, that starts adding up to some real money,” DeVries said. “It’s amazing the ripple effect of all of this. It helps the environment but it also frees up time which they can earn more money and if they can earn more money the children have a little better future or at least they have little better environment to live in and then the house is smoke-free and burn-free.”

In addition to installing the stoves, Marine View members had the opportunity to go into the homes and meet the families. They played soccer with the children in the afternoons and made connections with the villagers.

“Because of technology now, what I thought was really cool, we took a portable photo printer with us so everyone who was taking pictures throughout the week, we downloaded all the pictures the night before we left and were able to print out at least one picture for every family,” DeVries said. “After we got the stove installed and the fire was lit then we would also give them a children’s Bible and an adult Bible and leave them with that.”

DeVries and his fellow team members were amazed at how much those things meant to the villagers.

“They give more than just a stove. Often times they don’t even have any reading material at all.  It’s a real gift. They will show a video about the life of Jesus in the village and that’s a real treat because they don’t have TV. Most of the villages don’t even have electricity so it’s quite a thing to behold to be able to share on many levels with the villagers,” Kinch said. 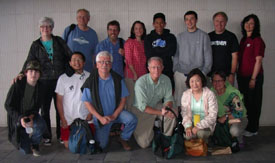 The 14 members of Marine View who made the trip formed relationships with the villagers and shared photos and Bibles.

And members of the Marine View mission team felt the impact of the work just as deeply as the villagers. DeVries thinks about the difference a simple stove can make today and in the future.

“We go down there and spend 10 days and install these stoves and it’s all well and good but when I’m dead and gone those stoves are still going to be there and going to be positively impacting the lives of these people 1,800 miles away,” he said. “It really is a project that will outlive my life.

“It’s not like a relief project where you’re dropping food in a disaster area. That’s good and that’s something that Samaritan’s Purse or World Vision that they do well,” DeVries said. “This is a one on one, here’s 14 people interacting with 250 people and we got to really know the village and spend time with them.”

“They come to help people they don’t even know. It’s really a gift to behold and it’s just a real exciting thing to be a part of,” he said. “These people are giving their time and resources and money and they’re ending up going to a location where life is difficult and they’re doing it out of love and care for other people, and it’s pretty special to watch that all happen.”