Home News Forgotten, but not gone

Forgotten, but not gone 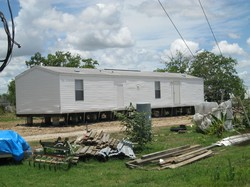 But for survivors of the nation’s second-costliest storm, 2008’s Hurricane Ike, finding hands to do that work has been more challenging.

The Presbytery of New Covenant in Houston was one of many area organizations that assisted in recovery, but as time has passed, volunteers have dwindled while the needs remain.

“There are more than 3,000 families still needing help,” said Kendall Boyd, the presbytery’s Ike recovery coordinator. “We are continuing to work with the remnants of the long-term recovery organization that was formed right after Hurricane Ike. The sad news is that we are the last man standing, if you will. All the other denominations have wrapped up their ministries.”

Although Ike caused massive damage over a very large area, getting the attention and resources to rebuild has always been a challenge. When Ike struck Texas three years ago, the rest of the country was focusing on the 2008 presidential election and the upheaval of the financial system.

“The timing of Ike was horrible for tens of thousands of Americans,” said Randy Ackley, coordinator of Presbyterian Disaster Assistance, in a 2009 PNS article. “You have whole neighborhoods that aren’t there and no one is talking about it. People just don’t know the extent of the damage in Texas.”

Boyd’s group has seven projects lined up to complete, likely the final ones before the ministry wraps up due to a drop in money and volunteers.

Between funding from the governor and money the ministry already has, the cost of tools and building materials is completely covered. But there’s another challenge.

“We need manpower. We need volunteers,” Boyd said. “I only have three groups signed up so far. Getting the word out has been the challenge. “

PDA-affiliated Texas City Volunteer Village, in Galveston County, is reopening this month and will be open throughout November. Volunteer Villages provide accommodations for groups from out of town.

New Covenant’s work has been focused on those most in need. Many homeowners are elderly, widowed, disabled or poor.

“I would say for the most part we’re helping those that either can’t help themselves or have fallen through the cracks of all the other recovery paths, and so these people would not be helped if it wasn’t for our ability to do what we do,” Boyd said.

One man, an elderly widower who lost his wife just before the storm, has the money for the needed repairs to his house, but that money excluded him from federal grants and assistance programs. Because he has limited vision, he wasn’t able to get through the reconstruction process on his own. He will buy the construction materials and the ministry will do the work, Boyd said.

Boyd and his groups have also done quite a bit of work helping a Cambodian farming community in nearby Brazoria County.

“Average income for the families in that little community is about ten or eleven thousand dollars a year,” he said. “We’re talking about multigenerational families that are living in these very small homes.”

The ministry rebuilt a home for a family of nine and even made the house larger with the addition of a utility room on the back. The family patriarch was a Vietnam War veteran who served as a soldier guide for U.S. troops. While trying to guide troops out of Saigon as it fell, he threw himself on a grenade that landed in the middle of the troops, losing part of his face, an eye, an ear, and suffering leg wounds in the process. He was given an award of valor by the U.S. military.

“It was a real easy decision to help him,” says Boyd. During the process, the family also converted from Buddhism, confirming for Boyd the importance of outreach and mission.   “Because of the love we showed them that family is now saved for Christ. That’s why we do what we do.”

Another family of seven lived in a mobile home and did not qualify for assistance. Those in mobile homes, which fared poorly in the storm, were largely ignored by federal and nonprofit programs that did not give assistance to anyone with a prefab home of any type, Boyd said.

The home had actually collapsed but the family went in with two by fours, duct tape and bailing wire and propped the roof back up to make it livable. Three children and four adults lived that way until March of this year when Boyd found out about them.

“By the fourth of July we had them in a new house,” he said. “It wasn’t brand new, it was a 2006 model, but we replaced their mobile home. To see that family go from being sickly and discouraged to being happy and encouraged was a real big gift. I took more from it than they did.”

That hands-on volunteer aspect of the work is purposeful and is what makes the program a ministry.

“We use the taglines, ‘Repairing homes but restoring lives,’ and that’s so true because when you repair the home it takes all the emotional stress of having your home in squalor all around you, it takes that all away and the ability to heal then begins. I didn’t understand that as much as I do now,” Boyd said. “With the amount of love that comes from the volunteers by interacting with the families, there’s, in my opinion, the bigger gift to the families we help than providing them with new Sheetrock and new flooring.”

The volunteer work also has value to the community as a whole.  In the 890 projects the ministry has been involved in, 3,500 volunteers have put in nearly 160,000 hours of work, valued at $3.5 million.

Boyd acknowledged that not all families will get the help they need before his ministry winds down, but for now, he will take as many volunteers as he can get.

“We’re just about at the end of the ministry, not that all the families will get the help they need, but everything has a season and a time and the resources are just drying up,” he said. “There’s not money or volunteer interest to continue it forever.”

Toni Montgomery is a freelance writer in Statesville, NC, where she is also secretary for First Presbyterian Church.