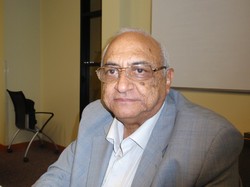 Eleven international peacemakers from different countries around the world will visit congregations and presbyteries of the Presbyterian Church (U.S.A.) from Sept. 23-Oct. 18.

They will share their stories about church-based ministries in their countries that seek peace justice and pursue peace in the name of Jesus Christ. This year’s international peacemakers come from Bangladesh, Egypt, Guatemala, India, Iraq, Israel/Palestine, Jordan, Madagascar, Mexico, Russia and Sudan.

The International Peacemaker program is sponsored by the Presbyterian Peacemaking Program.

Emad Ramzy Philobbos is professor emeritus of geology at Assiut University in Upper Egypt. He is involved in the Forum of Inter-cultural Dialogue run by the Coptic Evangelical Organization for Social Services, and in establishing a Center for Capacity Building and Social Cohesion to serve the Egyptian, Middle Eastern and North African potential leaders in churches and civic circles. Emad was the General Secretary of the Protestant Community in Egypt and is now a board member for the Presbyterian Seminary in Cairo.

Q: What is the situation in your country that you will be addressing?

“I hope to convey that Egypt is a civilized society.” People often think Egypt is only camels and pyramids, but Philobbos will talk to Presbyterians about Egypt’s demographics and people. “And then I’ll give them a quick glimpse of the Arab Spring and about how the people of Egypt united in 18 days.”

That unity has now moved into a split, bringing challenges for Egyptian Christians.

“At the same time, I’ll tell them how we as Christians are called to be peacemakers.”

In the early 1990s, conflicts between Muslims and Christians were very high. Between then and this year’s revolution, intercultural dialogue across the country was expanding, and a spirit of accepting others was deeply rooted among academics, the media and priests and sheiks. Meanwhile, training courses for hundreds of people taught conflict resolution and peacemaking.

“These two forums are more needed after the revolution. The challenges are now more than before.”

Q: How are the faith communities addressing this situation?

The Coptic Evangelical Organization for Social Services is planning to construct a peace-building center in Cairo. The group has the land, but not the resources for a building. The center will serve in two areas: peacemaking and training and development.

The organization was founded by a Presbyterian pastor in the early 1950s.

“It’s very important that he planted the spirit of serving the poor, whether Muslim or Christian, man or woman.”

Q: What lessons from your situation are you trying to communicate to U.S. Presbyterians?

The Coptic Evangelical Organization for Social Services at first faced challenges because Muslims were skeptical of its work.

“When they learned that we were not discussing doctrines but were discussing problems, they started to see that we really are faithful in serving the country as a whole. So they encouraged others to join together, so that’s why it’s expanded over the country.”

Q: What is the primary message you want to communicate to U.S. Presbyterians?