Courtesy of the Office of Church and Interfaith Relations, Warren Wilson College - September 8, 2011 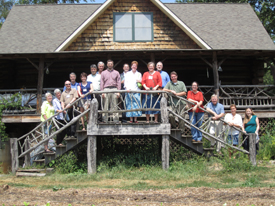 On the porch of the garden cabin at Warren Wilson College on September 1, the Presbytery of Western North Carolina’s two new For Such a Time as This pastoral residents were welcomed by their Asheville-area peers.

Just back from their extensive training and orientation at the Presbyterian Center in Louisville, Ky., Melissa Upchurch and Esta Jarrett joined 16 local Presbyterian pastors to introduce themselves, answer questions and learn about ministry in the WNC Presbytery.

Launched by the General Assembly Mission Council in Fall 2009, For Such a Time as This: A Small Church Residency—Growing Leaders, Growing Churches is a timely and innovative program that pairs small, underserved congregations with recent seminary graduates in a two-year pastoral residency relationship. One of the program’s unique and essential features is that each pastoral resident receives the support and guidance of a network of pastor/mentors, presbytery, and national church leaders.

Through the program, Esta Jarrett serves the Canton Presbyterian Church and Melissa Upchurch serves the Marshall Presbyterian Church. Two other first-call pastors in WNC Presbytery – Michael Isaacs and Jeff Coffey – are participating with Jarrett and Upchurch in the cluster group but are not part of the For Such a Time as This program.

Luncheon host and Warren Wilson’s director of development and faith relations, Julie Lehman, said that the response rate and time for this event was one of the highest she’d seen in years of event planning.  “I sent out an email invitation on Thursday, and by Friday afternoon I already had 19 responses, most of them ‘yes,’” she said. “This might be the start of a new tradition at the college.”  One of the guest pastors said, “This is the largest gathering of local Presbyterian pastors outside of a presbytery meeting in my nine years in ministry here!”

Around the table overlooking the organic garden and cow pastures, colleagues shared advice and inspiring stories from their ministries in the region and learned about the college’s Presbyterian roots and covenant relations.  College chaplain Jeanne Sommer, and the spiritual life student work crew also told about religious life on campus.

Warren Wilson College was founded by the Board of Home Missions of the Presbyterian Church (U.S.A.) in 1894.  The college values its Reformed heritage and remains in covenant relationship with the PC(USA) through four presbyteries and the Synod of the Mid-Atlantic.  It is one of the 62 institutions in the Association of Presbyterian Colleges and Universities.

Author: Courtesy of the Office of Church and Interfaith Relations, Warren Wilson College