Home News A hospital for Léogâne

How partnering means more effectively serving the people of Haiti 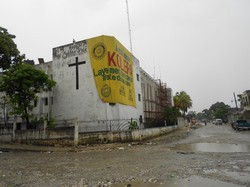 The streets of Léogâne are made up of broken concrete, rocks and dirt that become a muddy mess when it rains. Most of the buildings are no taller than a single story, and if they are, the top story is seriously damaged or has completely collapsed due to the 2010 earthquake that shook Haiti.

There is one exception: Holy Cross Hospital.

The hospital rises above the small town. It has a large cross with the words “Hospital Sainte Croix, Léogâne, Haiti” painted in black on one side of the white concrete building. The quake did damage some hospital structures. However, the three-story section built in the 1980s by Presbyterian World Mission’s longtime partner the Medical Benevolence Foundation remains standing, showing only a few nonstructural cracks.

It’s a strong testament to MBF’s commitment to build a lasting hospital for the people of Léogâne and to the importance of partnerships in Presbyterian mission work. The hospital is a health ministry of the Episcopal Diocese of Haiti, another long term partner of the Presbyterian Church (U.S.A.).

Immediately following the earthquake, Presbyterian Disaster Assistance released $200,000 to the hospital for immediate response, and later, another $775,000 for repairs. MBF took on the task of overseeing and handling those repairs to ensure that they would last.  Coordinator of International Health and Development Ministries for World Mission, Bob Ellis, recently visited Léogâne with representatives from MBF to assess the work. 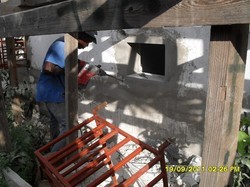 “As of the end of November (2011), progress was being made to construction. It was about 80 to 85 percent complete,” Ellis said. “The walls were done. The conduit and wiring was in; there was hot water and the floors were repaired.

“They plan to put in 45 air conditioning units for the patients but are waiting on the units to clear customs. Customs is one of the big challenges in Haiti, and that can mean delays, but the hope is that allthe repairs and improvements will be done by early to mid-2012.”

In addition to the funds for immediate response and necessary repairs directed to the hospital by PDA, Presbyterian World Mission provided $80,000 in operating expenses. MBF matched that amount to help offset patient fees in an area where poverty was exacerbated by the disaster.

In 1963, the Medical Benevolence Foundation put out a call to Presbyterian physicians wishing to serve others around the world. In 2013, the organization will celebrate its 50th anniversary. Due to the group’s long term efforts, its members understand how to work within the international environment to create sustainable and impactful projects in places of need. MBF has been engaged in Haiti for more than 30 of those years.

In the summer of 1962 the Board of World Missions of the Presbyterian Church of the United States appointed a committee “Relative to Medical Work, especially the financial support of hospitals.”

In March of 1963 the committee reported its findings and recommended the approval of the Foundation for Medical work. The Board voted that this application for a charter for the Medical Benevolence Foundation be approved. An attorney and member of the Mission Board was asked to prepare an application for the foundation’s charter, and Nashville was designated as its home office.

In June of 1963 the executive secretary of the Board of Word Missions, T. Watson Street, sent a letter to “all Presbyterian Doctors” announcing the formation of the Medical Benevolence Foundation.

“These are very committed people,” Ellis said about the leadership and volunteers of MBF. “They give their time, donate their money and share their considerable talents simply to help others in need. We are lucky to work with them and to have a long-running partnership with them.”

Toni Carver-Smith and Beth Basham, both members of the HRT, recently toured the hospital. Like Ellis, they had the chance to see how repairs were coming along and witnessed how the hospital ultimately benefits Haitians living elsewhere.

"Not only are Haitians being served and getting the medical treatment they need, but other Haitians are learning medical skills,” Basham said.

The hospital serves as a place for students from the Faculty of Nursing Science of the Episcopal University of Haiti to get real-world experience.

The nursing school offers the only baccalaureate program for nurses in Haiti and was also built by MBF. The organization secured donations for the initial operation and construction of the school and is currently expanding the facility with another $1.75 million in grants.

“It was really positive seeing young people learning a skill and having an occupation,” Carver-Smith told us. “It was wonderful to see them studying to be doctors, nurses and more.”

“I’m very hopeful for the future of Léogâne,” Ellis said. “As long as we preserve our effective partnerships with groups like MBF and others who truly understand or are a part of Haiti and the Haitian people, there will be progress through Presbyterian mission work.”

More to come:
Thursday, January 12, marks the two-year anniversary of the earthquake in Haiti. Look for our second report this week on the projects completed or now underway using your donations for Haiti relief efforts.

You'll learn why Presbyterian efforts are proving to be more effective than many other charitable groups.