Home News Back to the garden

Back to the garden 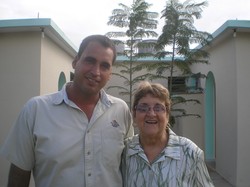 The deeply rutted road from this north coastal city up to the top of the nearby ridge makes for a teeth-rattling ride. Upon reaching the crest of the steep hill, however, one is greeted by a vast expanse of gently rolling farmland with a spectacular view of the city and the sparkling blue Caribbean beyond.

This is not just a place of spectacular beauty but of intense hope. It is called Centro Ecologico Diaconal, or “Demari,” by the peasant farmers who come here to learn and practice “spiritual ecology.”

Four years ago Demari was just a dream.

The land up here had been abused during the Soviet period ― from shortly after the Castro revolution in 1959 until the collapse of the Russian empire in 1990. Soviet-style agriculture included the clear-cutting of vast stands of timber to make room for large collectivized, mechanized farms. When the Soviets left Cuba in the early 1990s, they took their disastrous methods and by-then antiquated equipment with them, leaving Cuban farmworkers with very little.

Now, says Ofelia Ortega, Demari’s original dreamer, “from our faith we are bringing them things they haven’t had ― faith, love, hospitality, self-respect and self-development.”

In recent years, as the Castro government began to reinstitute private property ownership and encourage entrepreneurial agriculture, peasant farmers began to return to the land. From her base at the Evangelical Theological Seminary (SET) in Matanzas, where she served as president and still teaches, Ortega swung into action.

In the fall of 2007, Ortega founded Demari, which she still serves as director, with modest funding from the seminary-related Christian Institute for Gender Studies (ICEG), which she also founded.

These palm seedlings will grow into a shady grove, continuing the reforestation of land clear-cut during the Soviet period. —Jerry L. Van Marter

Demari soon acquired the ridgetop farm and began working with local farmers to assess their needs and respond with programs and resources designed to help them rebuild a small farm economy in the area around Matanzas.

“Our main target and goal is not production on this farm,” says Carlos Leon, who along with his wife, Rita Rubio, serves as Demari’s coordinator. “Our purpose is diagnostic, to help the farmers identify and resolve the problems they have. We’re teaching them how better to live with the land.”

More than 120 small farmers have formed a cooperative and use Demari as their base for training, capacity-building and community organizing and development. “We want to transform individual farmers’ successes into a stronger community here,” Leon says.

Demari began with basic programs in soil and water conservation, crop rotation methods and livestock husbandry. But over its four years ― a fifth anniversary celebration is planned for November 2012 ― Demari has grown to become one of the most innovative agricultural projects in the country.

The farmers of the cooperative have reforested 14 hectares (140,000 square meters) of land that was clear-cut during the Soviet period. Four windmills have been erected that extract deep water from the land. Five new bio-gas plants are about to go into production, converting animal waste into fuel rather than letting it contaminate land and water. 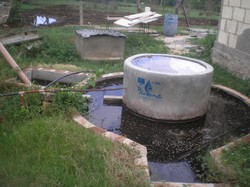 One of five bio-gas plants that will convert animal waste into fuel and prevent contamination of soil and water at Demari. —Jerry L. Van Marter

“One of the first problems the farmers identified was lack of nutrition for the cows,” Leon says. “So we implemented a program of planting new varieties of grasses and trees with nutrition-rich leaves. Now we have much stronger cows and more milk.”

Ortega, a world-renowned Presbyterian theologian who is a president of the World Council of Churches and a strong advocate for women, has taken special interest in Demari’s programs to empower women.

“Gender issues are very important because so many women are involved in our project,” she says.

Last year, Demari conducted workshops on growing flowers. “This is an excellent project for women because they can learn leadership skills, business methods and generate income for their families,” Ortega says. This year, workshops will be held on producing potted plants and flowers.

Demari recently threw open the doors of its newest facility ― the Dean and Mary Ann Lewis Retreat Center, named for longtime Presbyterian Church (U.S.A.) leader Dean Lewis and his wife. Lewis co-founded the Presbyterian Cuba Connection in 1996, a vast network of Presbyterian individuals and congregations that partner with the Presbyterian Reformed Church in Cuba (IPRC) to inform Presbyterians in the U.S. about the life and work of the Cuban church and to generate financial support for its needs.

The retreat center “provides an excellent place for people to stay and examine their Christian vocation,” Ortega says, adding with a chuckle, “and, of course, it also generates income for Demari.”

As Demari enters its fifth year, Ortega hopes for more visitors ― Cubans and Americans. “A lot of people don’t understand the situation with the farmers here and what our center is trying to do, so support from the churches is limited,” she says. “But the peasants know what this means for them, so we encourage churches to come because when they see, they understand.”