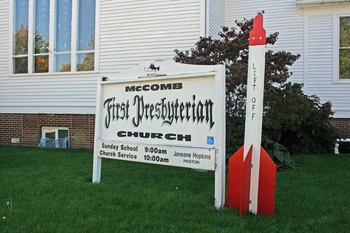 “Can we touch this?” wondered the children in McComb, Ohio (population 1,676). Sitting around a table, they were looking at real china dishes, glassware, and candles. “The children were in awe,” says Janeane Hopkins, who was at the church where it happened. “I was amazed at how many children had never seen anything like this. Not a real tablecloth, not even glass glasses.”

Hopkins was stunned. A retired schoolteacher and commissioned lay pastor at 60-member McComb First Presbyterian Church, she couldn’t get it out of her mind. “We did that Bible study program with other churches. It was based on the story of the prodigal son coming home to a beautiful party.”

Hopkins also knew there were many current and retired schoolteachers at First Presbyterian who could reach out to these children. “We decided to start a program specifically for the kids in our church,” she says. “We were hoping and praying our kids would invite other children from their school. When that didn’t happen we were terribly disappointed.”

Then Hopkins discovered that  Presbyterian Mission Agency was offering “New Beginnings” as a pilot program in her presbytery, Maumee Valley. The assessment process from Church Growth Ministries helps churches, particularly those in the latter stages of their life cycle, discern how to use their gifts to minister in a twenty-first-century world.

“‘New Beginnings’ helped us see the steps we had missed when we decided to try to reach our own kids,” she says. “It gave us a process by which not just leaders, but the entire congregation, could listen together to the Holy Spirit.”

During this discernment time, which is part of every “New Beginnings” assessment, First Presbyterian began to experience its aha moment. God was asking them to do what they had already tried—and in their eyes failed at—again.

“I remembered the ‘Can we touch it?’ experience with other churches in the community,” says Hopkins. “When I brought that up, we all began to wonder if we shouldn’t expand our vision, our thinking.”

First Presbyterian had only ten to twelve children in church, but there were 210 children in grades one through four at the local elementary school. They could invite them all to an after-school program one day a week. The congregation agreed, and “Lift-Off”—the name inspired by an image of the space shuttle hurtling into space—was born.

“Now we have a mission—to help children in our community build self-confidence and new relationships,” says Hopkins, “to give them new experiences, where they have opportunities to make new discoveries.”

Lift-Off, which grew from fifteen to thirty-five children in its first year, is adding something new to its program: Bible stories that fit as much as possible with the theme they’re using. 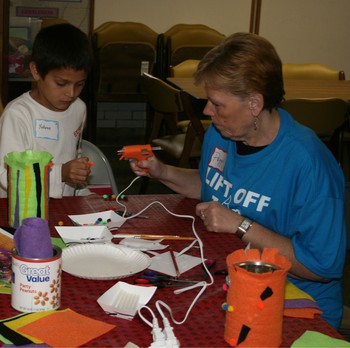 Lift-Off grew from 15 to 35 children in its first year; 75 percent of whom are uncurched —First Presbyterian Church, McComb, Ohio

“This fall we’re going to do scientific discoveries—the vinegar and baking soda, big eruptions, indoor lava lamps, and kaleidoscopes kind of thing,” says Hopkins. “Then we’ll talk about what light is, and God’s word being a lamp unto our feet and a light upon our path.”

Throughout the past school year, Hopkins repeatedly heard parents tell her, “This is the best thing that’s ever happened to my children.” One day, she got a call from a guidance counselor at the local school. “She said to me, ‘I can’t tell you what has been happening at school. The energy Lift-Off has caused throughout the school has been remarkable.’ ”

But it is an incredibly sad story that keeps First Presbyterian moving forward in the direction they believe the Holy Spirit is guiding them. In the first year of Lift-Off, at the end of each rotation, they invited family and friends of the children to come to the church for a meal and dessert. An open house where the children could show off what they’d accomplished. No one came.

“During the holidays we delivered the Christmas cookies, candy and crafts which each child had made to their homes,” says Hopkins, “to make sure their caregivers saw what their children were capable of.”

Which may explain why Hopkins says that while she is “grateful, humble, and excited” for the second year of Lift-Off, she is also “a little apprehensive. Even when they have good hearts, sometimes churches still close. Lift-Off helps us connect with our community. But it doesn’t mean it is the answer. We’re moving forward into the future, hoping to grow and be relevant in our community.”

“Can we touch this?”