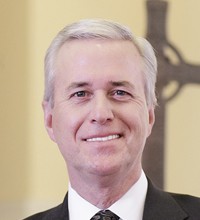 The board of trustees of Princeton Theological Seminary has unanimously elected the Rev. M. Craig Barnes as its seventh president and as professor of pastoral ministry.

Barnes, a 1981 M.Div. graduate of Princeton, has also served as a trustee of the seminary. He currently serves as the Robert Meneilly Professor of pastoral ministry and leadership at Pittsburgh Theological Seminary and pastor of the 1,100-member Shadyside Presbyterian Church in Pittsburgh. He is married to Dawne and they will move to Princeton with their teenage sons, Karl and Erik.

He is the author of eight books and serves as a columnist for The Christian Century. Barnes is a frequent lecturer and preacher at conferences, in congregations and at academic gatherings across America. His writing and academic work reflect his deep commitment to the theological formation of pastors to lead the church in changing times.

John Buchanan, pastor emeritus of the Fourth Presbyterian Church of Chicago and editor of The Christian Century, said, “Craig Barnes and the presidency of Princeton Theological Seminary is a match made in heaven. He is an exquisitely trained scholar, an eloquent proclaimer of the Gospel, a thoughtful analyst of culture, and a graceful and prolific author. His election as the next president of Princeton Seminary is very good news…”

Barnes states, “I fell in love with Princeton Seminary in 1978 when I began my Master of Divinity studies here…By the time I left the seminary, the words faith and learning were permanently engraved together on my heart.”

He says of this call, “I am eager to help Princeton be the best it can be — a winsome community that is committed to developing church leaders who are theologically formed, intellectually curious, and equipped to serve the church of Jesus Christ in a dramatically new cultural context.”

Barnes will begin in his role as president and professor of pastoral ministry on Jan. 1, 2013. He will succeed the Rev. Iain Torrance, who has served as president of Princeton Theological Seminary since 2004 and announced his intention to retire from this role last year. The seminary is celebrating its bicentennial anniversary.