Ruling elder and corporate attorney, noted for her non-anxious presence, intelligence, and humor, succumbs to cancer 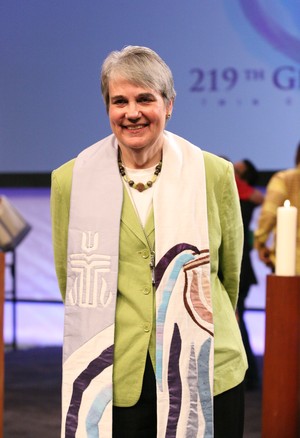 Cynthia (Cindy) Bolbach, Moderator of the 219th General Assembly (2010), died peacefully on December 12, 2012, after fighting a brave, nearly yearlong battle with cancer.She would have turned 65 on December 27.

A ruling elder in the Presbyterian Church (U.S.A.), Bolbach was elected Moderator on the fourth ballot as the only ruling elder in a field of six candidates. In a July 4, 2010, news release, Jerry Van Marter of the Presbyterian News Service (PNS) said that Bolbach’s brief answers and her “winsome sense of humor” won over the General Assembly commissioners.

"Cindy Bolbach was one of the most authentic faith leaders I have ever known,” said the Rev. Gradye Parsons, Stated Clerk of the General Assembly. “She had a huge capacity for grace and conviction. She loved to laugh and to listen. She was the best of us in every way."

Bolbach was born and raised in Lancaster County, Pa., where she was baptized and confirmed as a Lutheran. Predestined at an early age to be part of the Reformed tradition, she had a hamster named Luther and a guinea pig named Calvin. She became a Presbyterian when she joined New York Avenue Presbyterian Church in Washington, D.C., where she was ordained as a deacon and elder and served as clerk of session. After moving to Arlington, Va., in the mid-1980s, Bolbach transferred her membership to First Presbyterian Church, where she was also elected as clerk of session. At the General Assembly level, Bolbach most recently served as co-moderator of the Form of Government Task Force (2006-2010).

A graduate of Wittenberg University (Ohio) and Georgetown University Law Center, Bolbach served as executive vice president and corporate secretary of BNA, Inc., formerly the oldest company in the United States owned entirely by its more than 1,600 employees prior to its acquisition last year by Bloomberg.

When Bolbach was diagnosed with cancer in February 2012 following abdominal surgery, Parsons immediately called Presbyterians to prayer as she began treatment.

In an interview with PNS on June 26, during a break from her chemotherapy, Bolbach said, “I’ve been so uplifted by the outpouring of prayers by so many people. I’m astonished at how many people really care.” She told PNS that she planned to mention her illness during her sermon during opening worship at the Assembly, where she preached on the same text referenced in her platform speech as candidate for moderator in 2010.

In a June 30 news story, General Assembly reporter Meg Flannagan wrote that Bolbach’s focus from the text in 2010 was on the paralyzed man, suggesting that the PC(USA) was the paralyzed one suffering fatigue over constant battles, uncertainty and fear over the effective proclamation of the gospel in the 21st century.

“Two years later, I have a different focus and a different point of view,” she said. “I do not believe the PC(USA) is paralyzed … although we are light years removed from the 1950s during which denominationalism and church structure thrived, we are actively engaged and concerned with what God would have us do and be.”

She continued, “Over the past two years, I have seen those disciples at work in every nook and cranny in the Presbyterian Church (U.S.A.) … and over the past few months, I have felt those disciples. While struggling with cancer, I have been uplifted and supported by those disciples. Many disagree with me, but they have reached out to help me to the roof, and carried me to see Jesus…. None of [our disagreements] matter without disciples who are wiling to take risks for the sake of the gospel. Let’s not worry about process and structure; instead, let’s pray that we will be given the faith that Jesus saw in those disciples. Let’s commit ourselves to be those disciples who will take risks, who will carry others up to the roof….  If we commit ourselves to lift someone we don’t know, someone we don’t like, we will soar on wings like eagles, we will run and not grow weary, we will walk and not grow faint because we will be helping people see Jesus. What more could we ask for?”

Bolbach became a foster parent to teenager Jimmy in the 1980s. In addition, her life was enriched by the lives of her two nephews – a priest in the D.C. area and a journalist in New York City – and her sister, also a Presbyterian elder in Washington, D.C.

A memorial service will be held Saturday, December 15, at 1:00 p.m., at First Presbyterian Church of Arlington, Va.

Donations may be made to the Presbyterian Foundation for a grant program established in Bolbach’s name.