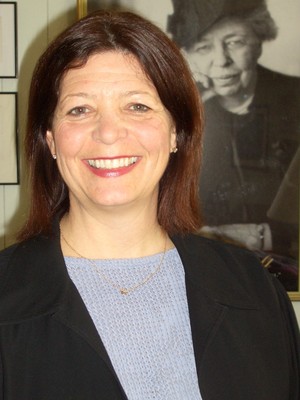 Compassion, Peace and Justice (CPJ) Ministry of the Presbyterian Church (U.S.A.) has announced the appointment of the Rev. Laurie Ann Kraus as coordinator for Presbyterian Disaster Assistance (PDA).

Kraus has been pastor of Riviera Presbyterian Church in Miami, Fla. since 1988. She has more than 20 years experience working in disaster response through the PC(USA). She served as the chair of the administrative commission for Hurricane Andrew relief and recovery in the Presbytery of Tropical Florida and was one of the founding members of the PDA National Response Team.

In announcing the appointment, CPJ director Sara Lisherness remarked, “It has been said that PDA is one of the ‘crown jewels’ of the Presbyterian Church (U.S.A.)’s mission and ministry. We are blessed that Laurie Kraus has been called to serve as the coordinator for PDA. She brings tremendous gifts to this position and a wealth of experience responding to disasters through the church. She is a pastor, an educator and has been on the front line in responding to some of the most significant disasters this nation has experienced in the past 20 years.”

About her new work, Kraus said, “I have been a passionate participant in the work of Presbyterian Disaster Assistance since the first Sunday after Hurricane Andrew (1992) devastated our community and congregation’s life. Dan Rift from the PC(USA) and Paul Masquelier, then executive presbyter of San Jose Presbytery, showed up in worship and told us through tears, “you are not alone ― the Church is with you in this season of challenge.”

Speaking of her volunteer work with PDA over the years, Kraus said, “As a volunteer with PDA since the National Response Team’s creation in 1995, my work in natural and human caused disaster as a responder, trainer and practical theologian has challenged, changed and transformed my understanding of ministry and of the Church.   I believe the work of PDA, in collaboration with all the partner ministries of the Presbyterian Mission Agency, is “Emmanuel,” God made flesh as we seek faithfully to work for the healing the divisions and wounds in the world, in the communities we serve and in the Church we love.  To serve as the coordinator of Presbyterian Disaster Assistance is an honor and a responsibility to which I will bring my deepest faith and best self.”

Kraus holds a BA from Wheaton College, the M.Div. from Princeton Theological Seminary, and Doctor of Ministry degrees from Columbia Theological Seminary and Florida Center for Theological Studies, where her dissertation projects were Rebuilding the Walls: A Narrative-Theological Model for Disaster Relief In the Wake of Hurricane Andrew (1994) and There is a River:  Embracing Diversity in the Multicultural Ministry Setting (1998).  She was awarded the Doctor of Humane Letters (honorary) by Sinai University in Jerusalem for her leadership in interfaith graduate theological education.

Kraus has served as a member and trainer on the National Response Team of PDA. She has been involved in disaster responses for numerous hurricanes, church fires, and shootings throughout the United States. She is a co-developer of PDA’s emerging Human Caused Disaster response ministry and curriculum. She is American Red Cross certified and is also a certified spiritual director.

She is the author of Tuning My Heart: the Melody of the Liturgical Year in Proclamation, Poetry and Praise, and has been published in several journals.  She was the content editor and a contributor to Out of the Depths: Voices of Faith from September 11, a 9/11 anniversary collection of articles and liturgy released in 2002.

Kraus is married to musician Warren Broome and is the mother of one daughter, also a musician who lives with her husband at McCormick Theological Seminary in Chicago, where he is in preparation for ministry.