After decades the translation work is now nearly complete 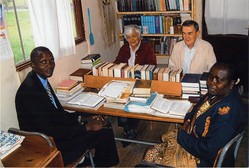 Presbyterian Church (U.S.A.) mission co-worker Marie “Breezy” Lusted began the translation of the Anuak Bible in Ethiopia in the 1970s, and in 1979 the project became a team effort led by PC(USA) mission co-worker Niles Reimer. Nearly four decades later and now poised for completion, the Anuak Bible is a tribute to the perseverance and faithfulness of the missionaries and their Anuak colleagues.

The Anuak are a Nilotic people who traditionally straddled the border of Sudan and Ethiopia. In the middle of the last century they were largely pushed out of Sudan by the Nuer and now live mostly in the Gambella region of Ethiopia. While legendary PC(USA) missionary Don McClure was living in Doleib Hill, Sudan, in the 1940s, he began to reach out to this people with the gospel message and eventually established a mission station at Pokwo, Gambella.

The holistic ministry among the Anuak in Sudan and Ethiopia included evangelism, health care, agricultural development, and Bible translation. The task of translating the New Testament fell to missionary Harvey Hoekstra, who completed this work in Sudan in the 1950s using Amharic script, and his work was republished in Ethiopia in 1964 using Latin script.

It was while living in Gambella and helping to review the Anuak New Testament in Latin script that Breezy’s interest in Bible translation was first stirred. Born in Wisconsin, she grew up in Washington, D.C., and received an R.N. degree from West Suburban Hospital in Oak Park, Ill., and a B.S. degree in nursing from Wheaton College in Wheaton, Ill. She traveled to Ethiopia as a Presbyterian missionary in 1956, studied Amharic for a year, and then served at a newly opened clinic at Pokwo.

Convinced in the early 1970s that God was calling her to translation work, in 1973 Breezy took the six-week Summer Institute of Linguistics (SIL) course at Gordon College in Wenham, Mass. Back in Pokwo, she had difficulty finding translators to help and could work on the translation only on a part-time basis.

In 1955 Niles and his wife, Ann, traveled to Ethiopia to serve as Presbyterian missionaries at the Pokwo station. Niles had majored in Greek at the College of Wooster and received an M.Div. degree from Princeton Seminary. In 1959, after their first term in Ethiopia, Niles and Ann received SIL training at the University of Oklahoma.

Given his training in the Bible, theology, and translation, Niles led the Bible translation project, focusing on theology and exegesis. Breezy, however, was the better linguist and spoke Amharic well. “Without her,” Niles says, “the project would not have been possible.” At first two Anuaks who were studying in Addis Ababa agreed to help them in their free time, which was Saturdays, holidays, and afternoons. In 1983, however, Niles and Breezy began to receive funding and so were able to hire two full-time translators.

Following the SIL method, the Anuaks did the initial translation, consulting several English versions of the Bible, as well as the Hebrew Old Testament and the Greek New Testament. When they completed a chapter, the whole team would review it and make corrections. Breezy says there were English words and phrases that the Aunaks did not understand, but she and Niles generally knew enough Anuak to detect when something was amiss.

Breezy recalls that the team struggled with quite a number of passages. It often took a long time to express biblical ideas in idiomatic Anuak. Literal translations, she explains, might sometimes be disastrous. She recalls in particular wrestling with Psalm 22:9, “You are the one who brought me forth from the womb.” Their first attempt came out in a way that implied an abortion.

When they had argued for a time about how best to translate a word or phrase but could not agree, they would set the problem aside for a while. Often when they came back to it, the issue would already be resolved in everyone’s mind, and they were quickly able to come to a consensus.

When they completed the Old Testament, the team then began a revision of Hoekstra’s New Testament. In the years since it had been published the Anuak language had changed, and there were words and ideas that they now knew better how to express.

The translation has taken a long time. When asked about this, Niles gave four reasons. First, there was frequent turnover in the Anuak translators—a key and gifted translator, Paul Othow, died, some changed jobs, some emigrated. Second, this was almost always a part-time project for the missionaries. Third, translators gave high priority to faithfully translating the text into meaningful, contemporary Anuak—an unavoidably time-consuming task. Fourth, Anuak is a difficult language: it has 19 phonemic vowels, and the grammar and verbal forms are complex.

He might also have added that they lived through tumultuous times. The emperor was overthrown in a Soviet-backed revolution in 1974. The government was then controlled by a communist junta, the “Derg,” led by Mengistu Halie Marian. Under Mengistu almost all the churches were closed and, according to Amnesty International, half a million people were killed, mostly during the “Red Terror” of 1977–78.  The Mengistu government itself was overthrown in May 1991 when the Eritrean Liberation Front (EPLF) guerilla forces gained control of the country and Mengistu fled to Zimbabwe.

Under the regime of the “Derg” the missionaries were no longer allowed to stay in Pokwo in 1979, and many missionaries left the country at that time. At its apogee, there were about 100 Presbyterian missionaries in Ethiopia, but during the communist period (1974-1991) the number dropped to a nadir of about 10. Both Niles and Breezy decided to stay in Ethiopia despite the turmoil of the time.

In 1979 they moved to the capital, Addis Ababa, and began working at the Mekana Yesus Girls School. Breezy served there as the school nurse and Niles as a Bible teacher. It was at this time that Niles joined Breezy in the translation work. Throughout all the instability of the period, Breezy says that she never felt personally threatened, but she recalls: “It was tough on people. A lot of people were arrested or killed, and many lost family members.”

Niles and Ann retired in 1995 but since then they have returned twice a year to Addis Ababa and Gambella to work on the translation, usually remaining for a couple months at a time. Since Niles’ retirement, Breezy has headed the project, and when she in turn retired in 2004, she continued to work on the project as a long-term volunteer.

They completed the Bible translation and gave it to the publisher in February 2010. The manuscript has been typeset and is currently undergoing a final review. Having experienced many delays, both Niles and Breezy are understandably reluctant to predict when the Anuak Bible will finally be published. They both believe, however, that it will be completed before the end of 2012.

The Anuak Bible translation was conducted under the auspices of the Bible Society of Ethiopia, but the translation was financed by Presbyterian congregations and members who have given money through an Extra Commitment Opportunity (ECO) account established for this purpose. The ECO is managed by the Office of International Evangelism, which also funds similar translation projects around the world.

Learn more about Presbyterian World Mission and the ways its mission workers share the good news of God's love in Jesus Christ in more than 50 countries around the world.