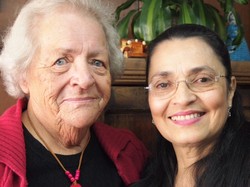 What began as a coincidental nonviolence training session has blossomed into a vocational passion for one pastor in the Presbyterian Church of Colombia.

Alba Luz Arrieta Cabrales’ interest in nonviolence was piqued when she was working at a Mennonite peace and justice center here, helping to compile books about peacemaking. A Quaker group approached the center and offered to train its employees in the Alternatives to Violence Project (AVP). From there, Arrieta began to be more interested in nonviolence and peace theology.

“It is about peace, it is about reconciliation, it is about transforming power … so many things that have to do with peace but are in our gospel too,” she said.

Started as a project between a U.S. prison and Quakers in 1975, AVP has since spread across the globe and offers experiential workshops in conflict resolution, responses to violence and personal growth.

Arrieta soon began leading AVP sessions around Colombia, working first with displaced women and children. Armed conflict and human rights violations during the past four decades have led to more than 3 million people being internally displaced in Colombia, making it second only to Sudan worldwide in IDPs. Many of the people Arrieta works with have been victims of rape or have had family members who have been killed or dismembered.

Through the AVP training, “They gained the capacity of having hope for building a new lifestyle,” Arietta said, adding that forgiveness is also a key part of the workshops.

The three-day workshops are very intensive and feature interactive exercises and games “to examine the ways in which we respond to situations where injustice, prejudice, frustration and anger can lead to aggressive behaviour and violence,” reads AVP’s website.

In addition to working with victims, AVP in Colombia also works with demobilized people — those who have given up their roles in illegal armed groups to rejoin society. This transition isn’t easy, especially in Bogotá. Often, 30-40 demobilized people will live together in a neighborhood, but their neighbors often don’t want them there, Arrieta said.

She spoke of a demobilization workshop she led: On the first day, she met with teenagers who were so ashamed of their past actions that they hid their faces under baseball caps. The second day, they were able to remove their caps and share some of their experiences. The youth had joined the armed groups because they couldn’t afford to go to school and wanted to feel important — the armed groups’ uniforms allowed them to feel powerful, but they were required to perform violent initiation rites.

AVP works to cultivate self-esteem and affirmation as well as nonviolence, creativity and a sense of community, Arrieta said.

“It is the capacity of each human being of being a peacemaker,” she said.

Arietta remains amazed at the strength of participants who have suffered violence and said she has learned a lot about herself through her work with them.

“All our problems become such little problems when you face all that these people have faced in their lives,” she said.

Many participants have begun leading their own trainings across Colombia, with workshops being held in Bogotá as well as Barranquilla, Cali and the Pacific coast area.

When she isn’t leading AVP workshops, Arietta continues to advocate for peace and healing through her work at Bogotá’s Presbyterian House, which serves as a refuge for people affected in many ways by Colombia’s internal conflict.

“We try that they might feel at home in this place,” said Lissi Hansen, administrator of the house. 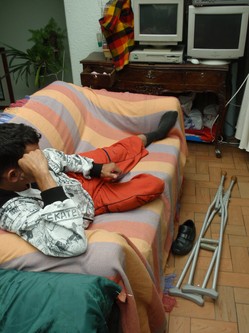 The Presbyterian House serves as a refuge for land-mine victims who come to Bogotá for medical treatment. —Bethany Furkin

Founded about 27 years ago by the San Barnabas Presbyterian Church, the Presbyterian House was originally meant to serve sick children. But as more displaced people and victims of land mine explosions began requesting help, the house expanded its mission.

It hosts Colombians with land mine injuries who have come to Bogotá for medical treatment. Many of the injuries happen in town without the proper medical facilities, so patients and their families can stay at the house while being seen by doctors here.

The International Red Cross refers some people to the house and provides some money for its referrals, but the house receives no other outside funding. The church owns the building and employs only one person — a cook. The rest of the personnel are volunteers. Everything in the house — from the clothes in its clothes closet to toys for the children — is donated.

Although the house is run by Presbyterians, it’s open to all. The number of people who need help can outnumber the house’s beds, but no one is turned away. The house, which can hold 40 people, sometimes has had as many as 60.

“We say it is God who is doing this work,” Hansen said. “People need help and very, very much care and love when they’re in this situation.”

This is one of a series of stories gathered on a Presbyterian Peace Fellowship delegation to Colombia Feb. 3-13. To learn more about PPF and its work in Colombia, including the Colombia Accompaniment Program, click here.