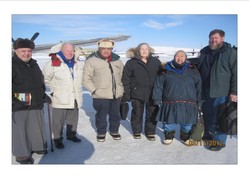 The Presbyterian Church (U.S.A.)’s Presbytery of Yukon has formally apologized to the Alaska Native residents of Gambell, Alaska ― a Yu’pik village on St. Lawrence Island in the Bering Sea 36 miles from the coast of Siberia ― for a now discredited mission policy that sought to stamp out native language and culture as part of the church’s evangelization efforts in Alaska.

The purpose of an extraordinary March 9-10 gathering in Gambell between village and church leaders was to “seek reconciliation.” said the Rev. Curtis Karns, executive presbyter for Yukon Presbytery.

Presbyterians arrived on St. Lawrence Island at the turn of the last century and ran a mission school on Gambell for four decades beginning in 1900. A handful of elders who are still alive remember suffering physical punishment ― such as swats with a yardstick ― for speaking their own language, said Lucy Apatiki, who was born and raised in the village and is now the Presbyterian Commissioned Lay Pastor in Gambell.

“We were told our drum and dance were evil, and it was almost a prerequisite to become Western to be a Christian,” Apatiki told the Alaska Dispatch.

“That does a lot of damage in a culture,” Karns added. “We were operating under the world view of the day,” which encouraged efforts to Westernize people once described as “heathens” and to eliminate customs thought to be “evil,” such as traditional drumming, he said.

“The last students from the Presbyterian schools are now the clan elders, and are becoming quite elderly. The time for reconciliation had clearly come,” Yukon Presbytery wrote in its report of the gathering.

At the gathering, Edna Apataki spoke of the experience of assimilation from the villagers’ point of view.  She said villagers felt great respect for some of the missionaries, but also experienced the shame and pain that an attitude of assimilation brought to the people.  “This pain contributes to many of the more difficult issues of village life, like substance abuse, domestic violence and suicide,” she said. 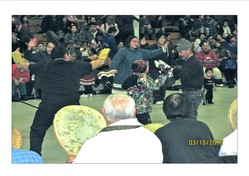 Dancers and drummers celebrate reconciliation at the “New Beginning” event in Gambell, Alaska on March 10. —courtesy of Presbytery of Yukon

Oleksa acknowledged that teachers and religious leaders were operating out of good intentions, but with a false belief that assimilation was a good thing.  “Previous polices had included extermination and removal, both of which were disastrous to the Native peoples of America.  Assimilation seemed a kinder and more enlightened approach,” he said. “Since then, however, the damage that comes by consistently denigrating a culture has become clear.”

Dorothy Bekoalak described the need for the people to recognize the way grief had been passed from generation to generation without providing a way for the community to see and process what had happened before moving on.  She called on the community to enter into “a season of healing.”

Presenting the formal apology, the Rev. Henry Woodall, moderator of the Leadership Team for the Presbytery of Yukon, said that reconciliation is required for Christians. It begins, he said, “with awareness of a wrong, confession on the part of the wrongdoer, repentance by charting a different path, and reconciliation in the form of forgiveness offered by the one who has been wronged, and an agreement on a new way of moving forward together.”

The evening concluded with a celebration offered in the form of an atuq, the traditional Yu’pik drumming and dance.

As the clan elders and community leaders each came forward to receive the apology and offer forgiveness, Jordan and Poggas presented each with a framed copy of the apology, and a crocheted cross that included the color purple for penance.

Alex DeMarban of “The Alaska Dispatch” and the Presbytery of Yukon contributed to this report.