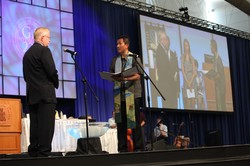 GA 220 Moderator Neal Presa asks the constitutional questions of Gradye Parsons during his installation as Stated Clerk of the General Assembly. —Danny Bolin

The Rev. Gradye Parsons was re-elected to a second four-year term as the Presbyterian Church (U.S.A.)’s General Assembly stated clerk this afternoon (July 1). Parsons was unopposed for the denomination’s top ecclesiastical office, making him the only uncontested candidate for stated clerk since Presbyterian reunion in 1983.

Parsons was elected unanimously by a voice vote.

Parsons ― who served pastorates in Newport and Bristol, Tenn., executive presbyter and stated clerk for Holston Presbytery, and as director of operations for the Office of the General Assembly under former Stated Clerk Clifton Kirkpatrick for seven years ― was first elected GA stated clerk in 2008.

The Rev. Dennis Hughes, chair of the Stated Clerk Nomination Committee, called the committee’s nomination of Parsons for a second term “a great pleasure.” He recounted Parsons’ nomination remarks in 2008, which have become his mantra of sort, based on the story of the boat in a storm in Mark’s gospel: “We are in the boat. There will be storms. We will not die.”

“Those words hold equally true today,” Hughes said. “We sensed then and now that Gradye Parson is a man of deep faith called by God to serve as stated clerk.”

He said the committee received only one application ― from Parsons ― which he called “almost unprecedented.”

“We are convinced that it is not so important how many persons apply, but that the right person apply,” Hughes said, reintroducing Parsons to the Assembly.

“It has been a privilege to work as your stated clerk these past four years,” Parsons said. Known as a voracious reader, he cited a book ― The Monkey and the Fish ― by Dave Gibbons, a pastor who built a successful church in the U.S., only to fail in an effort to replicate it in Thailand.

“Out of that experience, Dave started asking three questions about everything he did and I have found them very helpful,” Parsons said.

First: Where is Nazareth? “In Jesus’ time, it was not an old town, it was a new town on the margin of society,” Parsons said. “The lesson is to think about the people on the margins when we seek to follow Jesus.”

Second: What is our pain? “As Christians, we are always eager to show the sanctification, but not the pain that is messy and gets us there,” Parsons said. “The whole world is like this these days. The world wants to see how we handle this mess and get to Christ’s sanctification.”

Third: What’s in our hand? “I always hear complaints about what we lack, whether it’s money or youth or other things,” Parsons said. “Too often we don’t look at what we already have. We have so many gifts, so many things we can be about in service to Jesus Christ.”

Returning to his mantra, Parsons concluded, “Yes, there have been storms, and there still are. Yes, we’re in a bit of a mess, but we’re still called by Jesus Christ, to be sisters and brothers in the faith, and to use our gifts for the world Christ loves.”