McCabe resigns as vice moderator of the 220th GA 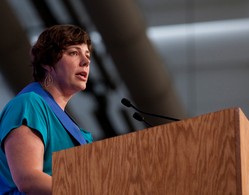 Surrounded by controversy since it was learned she had recently signed a same-gender wedding license in Washington, D.C., 220th General Assembly vice moderator Tara Spuhler McCabe stood down from that office today (July 4). The news was greeted with a chorus of “no!” and a standing ovation from most of the commissioners as she concluded her statement.

McCabe told the Assembly that “the amount of conversation in person and comments online indicate that my confirmation (Sunday) touched a nerve”. During the question-and-answer session during the moderatorial election Saturday night, the Rev. Neal D. Presa, 220th GA moderator, acknowledged that he and McCabe disagreed on the issue of same-gender marriage but their friendship outweighed their disagreement.

When Presa placed McCabe’s name in nomination as vice moderator Sunday, questions were raised on the floor and her confirmation was approved by a 55-44 percent vote.

“It was with deep sadness that the stated clerk and I received this news,” Presa told the
Assembly. “But as I listened to her, I was struck by her pastoral heart and her deep love for this church and General Assembly.“

He continued, “It is clear that there are parties within the church who would not let her split confirmation vote rest, who questioned her integrity and even the authenticity and veracity of our eleven-and-a-half year friendship. I absorbed those attacks and still stand by her while this pernicious poison reared its ugly head.”

“And I have an even more steely determination to seek unity in the bonds of peace. I will deeply miss what could have been but am even more determined to seek the peace and unity of our Presbyterian family,” he concluded.

“I am a pastor. That’s who God has called me to be,” McCabe told the stunned Assembly. “I think I embody the reality of a growing number of pastors who find themselves caught … between being pastors … and having a polity that restricts us from living out our pastoral calling.”

Presa will ask the Assembly to confirm the Rev. Tom Trinidad (Pueblo Presbytery) as the new vice moderator at this evening’s plenary session.