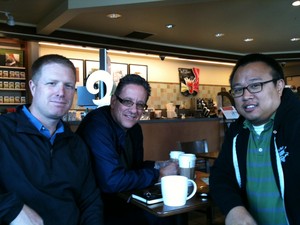 “Ten years from now, I want my eight-year-old son, Cameron, to know that we tried to follow Jesus,” says Brandon Bailey, ordained candidate for ministry and organizing pastor for a new missional community being formed in the North Puget Sound Presbytery. “

And I want my seven-year-old, Elijah, to be a healthy member of a healthy church, to know what it means to be who you are and why God placed you in a community of faith,” says Eric Eun, founder and leader of Wellspring, a growing outreach ministry for second-generation Korean and Asian Americans.

Bailey, 38, and Eun, 35, are leaders of two of the newest worshiping communities to spring up in North Puget Sound Presbytery, just north of Seattle,  in Everett, Washington.  Executive Presbyter Corey Schlosser-Hall says there is “a lot of Jesus-driven innovation” going on in the Northwest. “Even as there are fewer and fewer calls for ordained ministers, God is raising leaders for new things, to find ways where there isn’t a way.”

Eun, who is nonordained, went to seminary hoping to preach, teach, and counsel. As a student, he was hired as English Ministries pastor of a local Korean church. His role ended up being 20 percent pastor and 80 percent program supervisor. “My job was to create and sustain church programs in order to keep or sustain members,” say Eun. “But these programs used precious resources, burned out current members and slowly drove people away from the church.

Dissatisfied, Eun dropped out of seminary, left the church, and then opened and owned the largest Jewish delicatessen in Washington, D.C. He made good friends with Jewish leaders. He learned that their synagogues did not have the problems Christian churches had. In any given city, each Jewish community consists of a certain number of local synagogues. In the middle of these synagogues is a Jewish community center, which runs all the local synagogue programs (sports; vocational help; events; children, youth and young adult needs).“It’s so efficient. Rabbis can preach, teach, and counsel,” says Eun. “The synagogues don’t have to use resources to run programs. People are cared for and better connected to each other. This gives them a louder voice in their local community.”

When Eun moved to the Northwest two years ago, he began sharing with Schlosser-Hall a vision he had for ministry that had grown out of his experience in the Jewish community. He wanted to start a worship and fellowship gathering once a week to “spiritually feed young Asians and encourage them to stay in their mostly small home churches without burning out.” In addition, Wellspring would run sports programs and youth and collegiate ministries.

In March 2011, the North Puget Sound Presbytery helped start Wellspring as a covenant partner, supporting Eun half-time and providing for some of Wellspring’s program expenses. Already, Wellspring is working with ninety smaller Korean and Asian American churches and thirty-five larger ones, running weekly activities for young adults and encouraging them to maintain or reestablish relationships with the church.

“The happiest times in my thirty-five years are always when I’m doing well in my walk with God and with the church,” says Eun. “My lowest times are always when I’m away from God trying to do things on my own. Our focus is on leadership development—helping young adults rediscover their passion for their home church by volunteering.”

“We are gaining access to second-generation Korean Presbyterians,” says Schlosser-Hall. “Wellspring is enacting our mission in first-generation congregations. Eric Eun is an extraordinary member of the body of Christ with extraordinary gifts.” 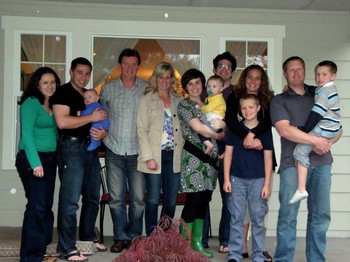 Bailey has been a youth minister at Mountain View Presbyterian Church in Marysville, Washington, since 1998. In 2011, he became the point person at Mountain View for an eight-member new church discernment team. They went through Starting New Churches, a Presbyterian Mission Agency resource produced by Church Growth Ministries, and “sensed God calling them to reach people in the Stanwood/Camino Island community.”

Coached by Craig Williams, West Coast associate for Presbyterian Centers for New Church Innovation, Bailey also went through a discerning mission leadership assessment. “We felt God wanted us to specifically reach young families,” he says. “To reach two generations with no church experience and those who have been hurt by, or have a negative perception of church.”

Bailey’s wife, Kristina, teaches at a local elementary school where more than three-quarters of the kids qualify for free and reduced lunch—indicators of high poverty and high transition. Their two sons, Cameron and Calvin, 6, are enrolled at the school.

“Always thinking about evangelism, our missional community wants to live out our faith in the places we live and work, building relationships with those we have been called to serve,”says Bailey. “It’s a way for our children to grow up knowing they have a mission at their school.”

Mountain View, which has about three hundred people in worship, will call Bailey as organizing pastor to form two missional communities of twenty people in the next year. The expectation is these new communities will form additional ones in the first two years of their existence.

“Just like Wellspring was a kind of ministry, this is a new kind of church plant for our presbytery,” says Schlosser-Hall. “They’re not just starting a church for those who are interested in joining a Presbyterian church. They’re going to make disciples to make disciples. They want to see people baptized.”

Editor’s note: Below is a list of a variety of worshiping communities springing up in the North Puget Sound Presbytery, with brief descriptions provided by Schlosser-Hall:

Tierra Nueva Worshiping Communities in Burlington, Washington, is mission that has a church. Each new group of people they serve connects with three worship services every week. The church has a gang ministry, jail ministry, migrant farm workers and organic farming ministry, a Faith house transitional program, and now the emergence of New Earth Works—a sustainable business.

Bellingham Faith Community, supported by three Presbyterian Church (U.S.A.) congregations in Bellingham, Washington, is focused on folks in significant recovery from substance abuse and those emerging from prison.

Everett, Shoreline and Edmonds Community College Ministries were started by Rev. Milad Istafanous, who was ordained in Egypt, and launched by Calvin Presbyterian Church in Shoreline, Washington. These ministries reach out to young Muslims.