Message: opening the government is a moral imperative 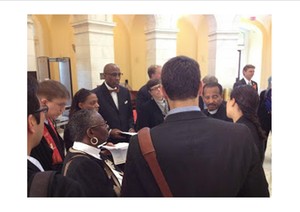 Tuesday (Oct. 15), as the U.S. House of Representatives continued to wrangle today over the impasse that has closed the government for more than two weeks, scores of religious leaders descended on Capitol Hill to call the government back to work.

Simultaneously, people of faith delivered more than 32,000 petitions to Congressional offices around the country calling on House Members to end the government shutdown. The petition signers are members of Faithful America — a fast-growing online community dedicated to reclaiming Christianity from the religious right and putting faith into action for social justice.

Presbyterian Church (U.S.A.) Director for Public Witness the Rev. J. Herbert Nelson, II joined with interfaith and ecumenical colleagues in calling on Congress to put the common good ahead of political games.  In a Pilgrimage for Courage and the Common Good, Nelson and his colleagues gathered in the Rotunda of the Cannon House Office Building, began with prayer and hymns, and then began a processional through the halls of Congress, stopping to deliver this letter at the offices of key members whose influence and good faith is crucial to ending this political standoff.

The letter begins: “As people of faith and conscience, we urge you to place shared democratic values above short term political expediency, exercise the courage to fund our nation’s government, raise the debt limit without preconditions and get back to work on a faithful budget that serves the common good.”

In a statement about the shutdown, the Nelson said: “Too many lives are impacted by this selfish internal battle for power. The United States government has an important role in alleviating hunger and poverty, ensuring food safety and public health, investing in clinical trials and research, monitoring pollution and the safety of the environment, engaging in diplomacy and relief and development operations overseas, and employing the nation’s largest workforce.  It is time to put the federal government back to work to ensure health, wholeness, and fulfilling livelihoods, not only for federal workers, but for all of us.”

The leaders also decried the fact that Republican tactics to curtail the Affordable Care Act ― commonly called Obamacare ― had prevented approval of the federal budget.

“To take such rash and destructive action in order to prevent further implementation of the Affordable Care Act ― which addresses the needs of 50 million people without health insurance ― is a grave moral failure,” the leaders said in their message.

“While the ACA has its limitations,” the faith leaders said, “it implements a market-based model with a history of bi-partisan support. Repealing or defunding it will hurt millions of people and many small businesses. We urge all members of Congress to stand up for our democracy and reject this futile and harmful effort.”

The Rev. Michael Livingston, a PC(USA) minister who is policy director at Interfaith Worker Justice and former director of the National Council of Churches Poverty Initiative, said, “Locking low-income workers out of their jobs and holding them for ransom is simply un-Christian. This inflicts needless pain on families already struggling to make ends meet. We’re urging the members of Congress responsible for this hardship to vote now to put these workers back in their jobs.”

Nelson concluded his statement: “We need a government that functions based on a commitment to shared responsibility and the common good. Those who have contempt for government have no business serving as a Member of Congress.  It is contrary to the oath of office.  Join me in calling on Congress to end this shutdown and engage in more reasonable debate in which people’s wellbeing is at the center of our concern.”

Church of the Brethren

Conference of Major Superiors of Men

National Advocacy Center of the Sisters of the Good Shepherd

United Methodist Church General Board of Church and Society

Center on Conscience and War

Columban Center for Advocacy and Outreach

Missionary Oblates of Mary Immaculate, Office of Justice, Peace and the Integrity of Creation

The National Council of the Churches of Christ, USA

Sisters of Mercy of the Americas - Institute Leadership Team