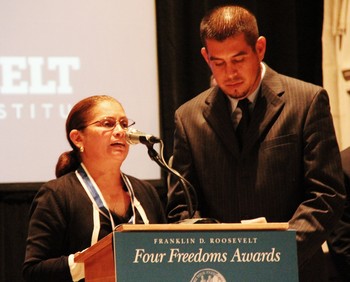 The Coalition of Immokalee Workers (CIW) was awarded the Freedom from Want medal from the Roosevelt Institute here Oct. 16.

In conferring the honor, the Roosevelt Institute cited the Fair Food Program as “a sustainable blueprint for worker-driven corporate social responsibility … and freedom from forced labor, sexual harassment, and violence in the workplace for nearly 100,000 workers.” (Click here to watch the full ceremony. The presentation to the CIW is at 27:30 minutes.)

After the medal was placed upon her shoulders, Nely Rodriguez of the CIW immediately asked the farmworkers from Immokalee who were in the audience to stand and recognized the many more who were not able to come. Gerardo Reyes Chavez of the CIW continued, “Somewhere we have heard that the arc of the moral universe is long, but it bends towards justice … Today, for first the first time in the history of the south, this dream is coming true for farmworkers in Florida’s agriculture. For the first time, we have a place at the table. In our struggle for better wages and working conditions, we are confident that this recognition will help us to arrive to the day in which our dreams will be made fully real.”

Ruling elder Linda Valentine, executive director of the Presbyterian Mission Agency, attended the ceremony and the laureates’ reception following the program. “The CIW’s vision, commitment and partnership have created lasting change, bringing together farmworkers, growers, corporations and consumers in common purpose to ensure human freedom and dignity as God intends,” said Valentine. “We extend our heartfelt congratulations upon this momentous occasion.” 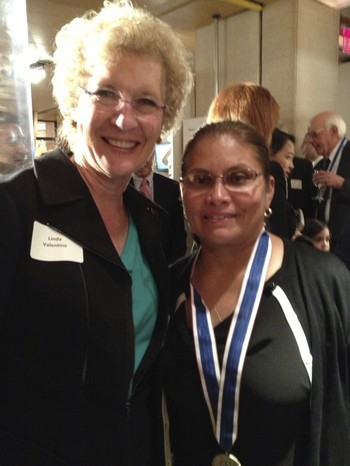 “In 1941 my grandfather, FDR, delivered a speech to Congress outlining his vision of the core principles of a strong and vibrant democracy,” said Anna Eleanor Roosevelt as she opened the ceremony. “These principles have come to be known as the Four Freedoms … These awards celebrate the ideals my grandparents believed in and worked for. They celebrate that that work is still ongoing. And they call each of us to renewed commitment.”

President Jimmy Carter commended the CIW for receiving the award, saying, “I have followed your challenges for almost two decades, during which your efforts have been characterized by determination and principle. You have formed innovative partnerships to find common ground between diverse interest, including some of the poorest workers in the United States and their employers, supply chain companies, retailers, consumers and law enforcement.”

The sanctuary of St. James Episcopal Church — its soaring arches aglow with soft light and its apertures filled with the ascending melodies from a string quartet — provided the event with a space for hope as well as remembrance.

“Twenty years ago when we first began organizing, Immokalee was a town defined by violence — violence against women, beatings in the fields, modern day slavery. It was a brutal and unforgiving place,” said Greg Asbed of the CIW. “And it was in that world that we would gather every week at a little borrowed room at Our Lady of Guadalupe Catholic Church and we’d circle the chairs up and we would pass this this book around, this is the Universal Declaration of Human Rights … This book gave us hope that a better world was in fact possible; a more humane world was in fact possible. And this book gave us strength, the strength we needed to fight to make that world real.”

And as the CIW gathered those chairs into a circle 20 years ago, the PC(USA) was there. A Self-Development of People grant helped farmworkers organize themselves. From early work stoppages to the 240-mile march across Florida to the 30-day hunger strike in 1997, local Presbyterians came together with the CIW and brought its call for consumer support of a boycott of Taco Bell to the General Assembly in 2002. The boycott was resolved successfully in 2005 with a groundbreaking agreement between Yum! Brands and the CIW that improved wages and working conditions for Florida tomato harvesters and paved the way for agreements with 10 other companies in fast food, grocery and foodservice. From these agreements, the Fair Food Program was born.

For more than 11 years, Presbyterians across the nation have written postcards, dropped off manager’s letters to stores and marched with CIW, convincing fast-food, foodservice and supermarket corporations to use their purchasing power to elevate human rights by requiring their suppliers to uphold the fair food standards. Most recently Presbyterians from Florida, North Carolina and Georgia hosted educational events, welcomed the CIW to worship and joined the CIW in public witness at numerous Publix supermarkets across the southeast.

“This transformation of an entire industry was possible in large part because of the support of allies like the Presbyterian Church (U.S.A.), who stood with us from the beginning,” said Reyes Chavez following the ceremony.

The Roosevelt Institute recognized the CIW not only for transforming the tomato industry but also for creating a new model of worker-driven corporate responsibility that can be used in different industries, around the world. The immense promise and scalability of the Fair Food Program has been recognized by observers from the United Nations Working Group on Business and Human Rights to PBS’s Frontline. The President's Advisory Council on Faith-Based and Neighborhood Partnerships singled out the FFP in a major new report as one of the “most successful and innovative programs” in the world today to uncover and prevent modern-day slavery.

The program, which is independently monitored by the Fair Food Standards Council, has been lauded by the White House conference on Human Trafficking and the President’s Council on Faith-based and Community Partnerships (2013), United Nation’s Working Group on Business and Human Rights (2013) for its collaborative, sustainable, scalable, approach that uses market mechanisms to achieve change.

Learn more about how the PC(USA)’s participation in the Campaign for Fair Food and take action to urge Wendy’s and supermarkets (Publix, Ahold, Kroger) to join the Fair Food Program:  http://pcusa.org/fairfood.

The Rev. Noelle Damico is associate for Fair Food with the Presbyterian Hunger Program.