In search of affordable groceries 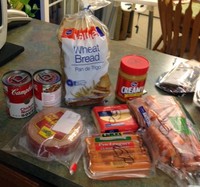 A Saturday-morning trip to buy a week’s worth of groceries turned into an unusually daunting challenge for Gradye Parsons, Stated Clerk of the General Assembly of the Presbyterian Church (U.S.A.).

Parsons is one of a number of Presbyterians who have committed to taking the SNAP/Food Stamp Challenge November 17-23. Participants in the Challenge pledge to use the average food stamp benefit—which varies by state—as their total budget for groceries. In Kentucky, that means $4.25 per person per day, or $29.75 for the week.

The goal of the Challenge is to give participants a view of what life can be like for millions of low-income Americans who struggle to avoid hunger and afford nutritious foods for their families.

Before his shopping expedition, Parsons spent time checking ads in the newspaper and scoping out bargains. “I had to come up with a strategy,” he said.

His research steered him to a national discount grocery chain, in addition to his usual market. The discount chain was having a two-for-one sale on cans of tomato and chicken noodle soup. “That’s hard to beat,” Parsons said.

But with less than $30 in his pocket, the money went quickly. He ended up with a lot of starches and very little fresh produce in his shopping cart. “Bread is pretty cheap,” he said. “I got bologna and hot dogs for protein.”

Parsons was able to afford a bag of carrots—“regular carrots, the long kind,” not the more popular mini-carrots, he said. “I got a bag of small Macintosh apples for less than three dollars.” He also found some frozen peas on sale.

So for the next week, Parsons’ typical daily menu looks something like this:

Leaders of the Presbyterian Hunger Program, one of the groups promoting the Challenge, say that as households across the country face economic struggles, food stamps serve as a critical resource. Along with Parsons, they hope the Challenge will motivate participants to urge members of Congress not to cut funding for SNAP.

Parsons said his grandmother worked in a school cafeteria, dishing up free lunches to children who qualified. She was grateful to see that kids who showed up in September looking skinny and malnourished often would put on a few pounds by the end of the school year, thanks to the lunches.

“I’m sorry that we’re having to do this Challenge to call attention to the fact that SNAP benefits are being cut at a time when there are so many hungry people,” Parsons said. “I hope we can become more aware that for people on food stamps, it’s a real struggle—especially with today’s food prices—to keep from being hungry.”

For more information or to participate in the PC(USA) SNAP/Food Stamp Challenge, go to pcusa.org/snapchallenge.