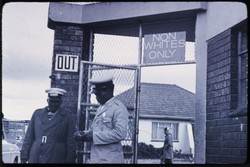 As dignitaries from around the world gathered in South Africa yesterday for a memorial service for Nelson Mandela, several Presbyterian leaders reflected on the life and legacy of this humble man who became a towering figure in the struggle for racial justice. They also commented on the significance of the Presbyterian church’s efforts to end apartheid.

Bill Somplatsky-Jarman, the Presbyterian Church (U.S.A.)’s associate for Mission Responsibility Through Investment (MRTI), recalls how that church agency, inspired by the courage of Mandela and other South Africans, helped pull together an international ecumenical effort to pressure banks to stop lending to South Africa.

“We were pulling together European and U.S. churches,” he says. “We were even reaching out to the Japanese.”

Endeavors such as this put economic pressure on the government of South Africa and “eventually pushed them over the edge,” Somplatsky-Jarman says. He considers this work “probably one of the finest things MRTI ever did.”

Somplatsky-Jarman came on board with MRTI in 1984, just after that year’s General Assembly had adopted a strategy for divestment from companies supporting policies that conflicted with essential biblical principles. The assembly had directed that this strategy be applied to companies doing business in South Africa.

The assembly was building on concerns expressed as far back as the 1960s. Somplatsky-Jarman recalls that the idea of divestment was first put forward by a group of Presbyterian Women who visited South Africa in 1963.

The women took note of how many U.S. companies were operating there. In a report on their trip, they suggested that the church try to enlist the help of these companies to bring down the apartheid regime. If that failed, they said, perhaps the church should consider selling any stock it held in those companies.

A statement by the 177th General Assembly (1965) of the United Presbyterian Church in the United States of America (UPCUSA) declared, “We believe apartheid to be in gross violation of Biblical religion and a repudiation of Christian ethical imperatives” (Minutes, UPCUSA, 1965, Part I, p. 403).

Calling apartheid “theologically and morally indefensible” (ibid.), the assembly “earnestly implore[d] all fellow Christians, including our brothers in South Africa, to join us in repentance for the sin of racism, to the end that we might be given, by God’s grace, the new humanity in Christ, in whom there is ‘neither Jew nor Greek, bond nor free’” (ibid, p. 405).

Twenty years later, the 197th General Assembly (1985) approved a proposal, developed by MRTI, for “selective phased divestment” (Minutes, 1985, Part I, p. 230) of securities in firms supporting apartheid in South Africa. In doing so, the PC(USA) joined numerous churches, universities, city and state governments, and other groups committed to putting economic pressure on corporations whose activities bolstered the strength of the white minority in South Africa.

“A tremendous amount of work went into this effort at all levels,” Somplatsky-Jarman says. But he also believes that ultimately what caused apartheid to crumble was “the continuing struggle by black South Africans for their freedom.” He adds, “It never would have happened without the South African people staying strong.”

He and other Presbyterians recognize Nelson Mandela as a key leader in that struggle.

The Reverend Oscar McCloud, director of the Program Agency of the United Presbyterian Church in the U.S.A. from 1972 to 1986, met Mandela in Soweto, South Africa, soon after Mandela’s release from prison in 1990. McCloud, now 77 and retired in Atlanta, was part of a delegation sent to South Africa by the World Council of Churches.

“He seemed very reserved, as though he was still adjusting to being a free man,” McCloud recalls of Mandela. “The thing that really impressed me was that there was no bitterness. You would never have known that he had been imprisoned for twenty-seven years.”

Mandela may not have been active in a church, but his life exemplified Christian virtues, McCloud believes. “Mandela realized that to cultivate hatred was to let his oppressors succeed, and that the only way he could deal with oppressors was to practice forgiveness.”

McCloud recalls participating in several fruitless meetings with leaders of South Africa’s white Dutch Reformed Church, whose theology was being used to prop up the apartheid regime. Such encounters left him without much hope for a peaceful transition toward racial justice.

“Having gone to South Africa several times when apartheid was enforced,” he says, “I never thought that South Africa would change its system without blood in the streets.” He credits Mandela for enabling the impossible to happen.

Thelma Adair, Moderator of the 188th General Assembly (1976) of the UPCUSA and former president of Church Women United, met Nelson Mandela at a 1990 worship service at Riverside Church in New York City. It was a gathering of the religious community to celebrate Mandela’s release from prison. McCloud also attended.

Now 93, Adair still has vivid memories of being seated with Nelson and Winnie Mandela in the pulpit, where she was to read Scripture. “During the three-hour-plus service, we had moments to talk,” she says. “As I looked down, I noticed that his ankles were so swollen.”

When she expressed concern to Mandela, she was struck by the humility of his response. He said that such physical discomforts—from the constant travel, standing to make speeches, and lack of rest—were part of his commitment to his supporters in the struggle for justice.

Adair marvels that Mandela was such a humble man in person, and yet, because of him, “millions of individuals will not experience the humiliation of discrimination—a legacy for years to come.”

Mandela’s struggle with the apartheid regime was “a David-and-Goliath situation,” Adair says. His example can motivate Christians fighting racism and other injustices today, she believes. “There’s still a need for voices to speak out.”

Adair says Mandela’s enduring message to the church would be something like this: “Stand strong. Challenge the giant. Witness to those things you believe in.”