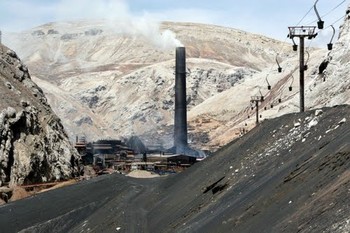 In recent weeks, the video Wealth Inequality in America, which calls attention to perceptions, ideals and realities of wealth distribution in the United States, has been circulating through social media.

Suffice it to say, the gap between the rich and the poor is of concern to people in the United States, and one could conclude that addressing this gap should be a priority.

But as I reflect on the video, I am reminded that this particular conversation about poverty and wealth distribution pertains to the United States. I live in Peru.

As a former Young Adult Volunteer (YAV) in the Philippines, a development worker in Nicaragua and now a mission co-worker based in Lima, this conversation about poverty invites a question I have wrestled with for years: Why go around the world to address poverty when poverty exists at sobering levels across the United States?

Initially, I find myself in a defensive position when faced with this question, recalling a litany of responses I have learned to repeat and even preach:

Don’t get me wrong. There is validity in each of these responses and others as well. But none of these responses singularly or collectively have been able to reconcile a conflict I feel within myself when faced with this challenging question about serving abroad — a question that I trust comes from a place of compassion for the poor in the United States and not contempt for our neighbors around the world.

The question assumes that poverty in the United States exists in a vacuum, distant and unrelated to poverty around the world. Similarly, it assumes that effective response to poverty can only be done at the local level (social services, job training, development projects, etc.)

At a time when some might question why the church is dedicating resources to address global poverty when we have increasing poverty in the United States, I contend that for the very reason that poverty exists in startling numbers in the United States we must engage more deeply, carefully and prayerfully in global mission.

If we are serious about addressing poverty, then we must do so not only at the local level and in hands-on ways (which are very legitimate responses), but also at the global level and in strategic ways. For us to more fully comprehend and effectively address root causes of poverty, we must do so together with our global partners.

Read the rest of Koball’s piece on the Joining Hands webpage.