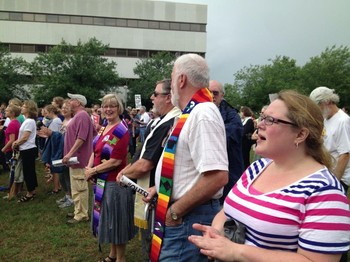 Every Monday for the past eight months, like clockwork, the Rev. Frank Dew has sounded his rallying cry across the social media landscape.

“Let's go to Raleigh!’ reads a representative post to the Salem Presbytery pastors’ Facebook group June 23. “Leaving at 3:00 pm…for Moral Monday! What is happening in Raleigh is not who we are! We are better than that!”

The North Carolina NAACP-led Moral Monday protests were organized in April to fight against cuts to social programs, education reforms and changes to voting laws in the state.

Last week, North Carolina NAACP President the Rev. William Barber II and 11 others were found guilty of second-degree trespassing and violating building rules while protesting in April at the state legislature, according to a Dec. 4 article by the Associated Press.

Dew himself was arrested as part of the third and largest group of protesters June 3.

“As a lifelong resident of North Carolina, I no longer recognize our state,” he said. “Although over my lifetime I have seen slow but steady progress toward social justice, during this last legislative session I have seen our state turn back the clock in terms of voting rights, education funding, environmental concerns, health care (not expanding Medicaid), worker’s rights (not extending unemployment benefits) and the elimination of the Racial Justice Act, which allowed Death Row inmates to appeal based on racially selected juries. I believe that the Moral Monday protests have helped shine a light on these changes that the people of this state will remember come 2014.”

The Rev. J. Herbert Nelson II, director of the PC(USA)’s Office of Public Witness (OPW) in Washington, D.C. — himself no stranger to being arrested for acts of civil disobedience — also took part in the Moral Monday protests, which have spread across the state to other North Carolina cities since the movement began.

“I attended the Asheville, N.C., Moral Monday in August after preaching at a youth conference in Montreat,” Nelson said. “Moral Monday is a powerful model for social and transformative change in a period when both individual and collective human rights are being suppressed. I have known Rev. Barber and worked with him for several years while serving as a pastor and community leader in North Carolina. He is a great critical and strategic thinker about issues regarding social change.”

Nelson acknowledged that the organizing strategy behind Moral Mondays shares some key similarities with the model for the OPW. “Of course our specific objectives are different, but framing the movement for social justice is similar,” he said. “The OPW’s mission is about breaking boundaries established by the political order, organizing coalitions around a central theme rather than single issues, promoting basic issues that impact most people and building internal coalitions around those issues; that is, big tent versus silos.”

The Rev. Arthur Canada, vice chair of the Presbyterian Mission Agency Board and pastor of McClintock Presbyterian Church in Charlotte, N.C., has also participated in Moral Mondays.

“We had a great turnout at Marshall Park in Charlotte this summer,” said Canada. “People speaking from a variety of different perspectives all came together to get the legislature to do what’s beneficial for the people, especially the poor. Charlotte Presbytery was well represented by a number of teaching elders, council leadership and committee members, including our presbytery’s [2013] moderator, Floretta Watkins.”

The North Carolina NAACP’s Barber was quoted in the Associated Press story as saying that a protest had been planned for later this month and a large rally scheduled in February that he hopes will draw thousands to Raleigh. “We’re going to be back,” he said.

Nelson found the timing of a December event — a Moral Monday Service of Redemption at the State Capitol in Raleigh scheduled for Dec. 23 — to be especially significant.

“As the world celebrated the life and legacy of Nelson Mandela this past week, it is important to remember that many of the contextual struggles of human rights across this nation and around the globe are being challenged every day,” he said. “Our spiritual, moral and ethical focus as Presbyterian Christians must be centered on recapturing the essence of our social justice advocacy while finding new ways to resist the marginalization of more people in this country and around the globe. Moral Monday is one significant model in this effort.”

Dew said that he hopes the Forward Together Movement started by the North Carolina NAACP will cause some people “to take a second look at Church and Christianity.”

“As we stand up and speak out with — and on behalf of — the poor and left out of our state, I hope people will see that this is what Christianity looks like,” he said.