Worshiping community in heart of Appalachia offers bluegrass music, taste of the unexpected 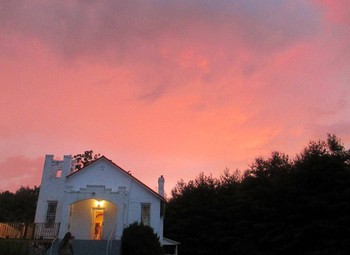 Worshipers are beginning to refer to Wild Goose as their “thin place” (where the veil between heaven and earth is very thin). —courtesy Wild Goose

One of the newest 1001 worshiping communities in the Presbyterian Church (U.S.A.) has a history of life, death and resurrection. Built 100 years ago as a mission church in a beautiful remote corner of southwestern Virginia, it has never had more than 50 members. Several times it has had to close its doors because the congregation got too small.

But each time, someone fell in love with the tiny brick church in the Appalachians and gathered a new congregation to worship and serve the community in Floyd County, Va.

In 2012, the cycle of death and life was happening again.

Edwin Lacy was serving as associate pastor in Bristol, Va., when he heard that the mountain church was going to have to close its doors. But this time Abingdon Presbytery was thinking of selling the building.

“I’ve been drawn to that church over the years,” said Lacy, who had planned to work there after his graduation from the University of Dubuque Theological Seminary in 2000. “I never could get it out of my mind.”

After graduation, the musician-turned-pastor was offered a chance to minister at the church, but the arrangement fell through at the last minute. In 2012, it looked like he might have another chance. He began dreaming about creating a new experimental worshiping community that would offer bluegrass music, expressions of Appalachian culture and a home to the “nonchurched in the community.” His hope was to tie the congregation into the 1001 New Worshiping Communities initiative.

“You have to understand, [fewer] than 300 people live there,” he said. “There’s one stoplight and a general store.”

Yet the Floyd County town draws more than 1,000 people for Appalachian music and art festivals on Friday nights.

When Lacy presented his plan to the presbytery, he encountered some initial resistance, and it began to look like his dream to pastor this church would die a second time. But six months later, he received a call from Abingdon Presbytery, wanting to know if he would consider providing leadership and direction for a new faith community at the site of the old church.

“What a gift,” says Lacy. “I no longer felt ownership of the idea. Now I could truly let the idea of this worshiping community develop organically in the community.”

Hearing what the presbytery wanted, Lacey went to work — taking out the pulpit, replacing pews with rocking chairs and building a fireplace. And he came up with the name Wild Goose Christian Community, drawing on the wild goose as a symbol of the Holy Spirit. 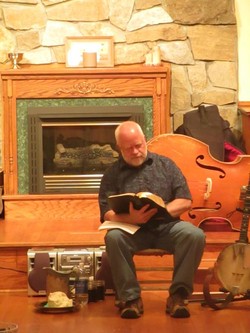 Pastor Edwin Lacy turning to the Word in front of the "pulpit" (fireplace) in the sanctuary. —courtesy Wild Goose

This May, Wild Goose began worshiping on Tuesday nights (to avoid competing with established congregations in the area). Every week, they sit by the fire in rocking chairs and sing bluegrass music, complete with banjos and fiddles. Communion is served in mason jars instead of goblets and is shared in a circle. Suppers and square dancing have become part of their shared life together.

Already some 30 people (the congregation was down to a dozen when the church closed) come regularly. Some are Presbyterian. Others who didn’t grow up as part of a church are beginning to refer to Wild Goose as their “thin place.”

“We’ve sung Celtic music that speaks of places where the distance — the veil between heaven and earth — is very thin,” said Lacy. “Folks doing church in their own way in one of the prettiest places on the planet are realizing how special this worshiping space is. Regardless of how we do church, the traditional body of Christ is very much alive and well. I’m so excited this is happening in a rural setting. I hope it helps other small churches think differently before they lock their doors.”

To learn more about Wild Goose, watch this video or listen to National Public Radio's interview (WVTF) with Edwin Lacy.