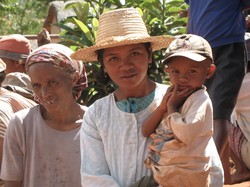 The first-round presidential election with 31 candidates took place as scheduled on October 25th in relative calm. There were irregularities, but very little violence. Thank you for your prayers.

On November 22nd, Dr. Jean Louis Robinson and Mr Hery Rajaonarimampianina were officially declared the two candidates with the most votes who will face off in a run-off election on December 20th.  Dr. Robinson is supported by former president Marc Ravalomanana and Mr. Rajaonarimampianina is supported by the current transitional president Andry Rajoelina who came to power via coup d’état in March 2009.

Parliamentary elections will also take place on December 20th. Tensions are high. The rains have also started which will complicate the election process in areas where rain makes transportation difficult.

Please continue to lift up the church and the nation of Madagascar through prayer in this election period.  Please pray for peaceful elections December 20th and that the results will help the country return to democracy and rule of law.  Please pray for reconciliation.

Learn more about the situation in Madagascar.