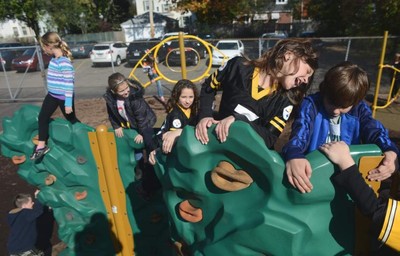 Crafton Elementary third-graders Abby Graner (center) and Rylan Henry, both 8, make their way along the school’s climbing wall on Tuesday, Oct. 29, 2013. The school’s playground was improved because of donations from the Rev. C. Edward Bowen. —Andrew Russell/Tribune-Review

The Rev. C. Edward Bowen knows his intestinal cancer gives him only a year or two to live, but his ministry will live on through children in Crafton.

A corporate accountant for two years before entering the seminary and becoming pastor at Crafton United Presbyterian Church, Bowen, 41, lived frugally and invested well. He established a fund in his name at the Pittsburgh Foundation so that, eventually, the remainder of his estate will increase the fund to $1 million for causes that help the borough's children.

A portion of an initial $200,000 gift paid for repairs to the playground at Crafton Elementary School.

“I'm trying to use the time I have left to do as much good as I can,” he said in an interview from his home in Huntington, W.Va., where he became pastor of Bates Memorial Presbyterian Church after a dozen years in Crafton. His parents, Charles and Joyce Bowen, moved to be near him.

While in Crafton, Bowen fell in love with the borough, known for its mature trees and Victorian homes. Home to about 1,130 children ages 17 and younger, the community earned a “Best Place to Raise Children in Pennsylvania” distinction from Bloomberg Business Week in 2011.

Bowen did his part to help it win that title. He started a ministry that fed families, tutored students in Crafton Elementary, bought kids coats and held dances for them.

Bowen and his brother Andrew grew up in Bethel Park, where he graduated from high school.

“Around my junior year of high school, I felt, out of the blue, this voice in my mind, saying ‘I want you to be a minister,' ” Bowen recalled. “It was very unexpected. It was not a vocation I ever considered. Growing up, I always considered being a stockbroker.”

Soon after the epiphany, he said, members of his church, Bethel Park Presbyterian, asked him if he ever considered being a minister. He believes God was telling him what to do.

He worked in the youth ministry at a church while attending Grove City College, where he earned a degree in accounting and economics. He became an accountant but soon heeded the call: He was ordained at Pittsburgh Theological Seminary.

Before moving to Crafton in 2000, Bowen served churches in Vandergrift and Slickville in Westmoreland County.

Savannah Sevacko, 11, a sixth-grader at Crafton Elementary, said Bowen taught her how to pray. She cried when she learned of his illness.

“I know I'll really miss him when he does go,” she said. Her family befriended Bowen by volunteering at his church and sometimes attended his services even though they are Catholic.

“Words can't begin to describe him,” said Savannah's mother, Georgene Sevacko, 47. “He's given so much to this community. He's made this community a lot closer.” 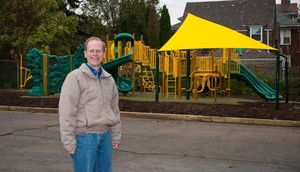 Emily Tipping, the PTA president at Crafton Elementary and Bowen fund committee member, said she tried to talk him out of giving away his money. She thought he should do something for himself.

“It's hard for me to accept gifts from individuals, but he would keep on giving and giving,” Tipping said. “He's made it clear it means a great deal to him.”

During recess at the school last week, kids ran to the playground, where part of the surface is rubberized thanks to Bowen's gift. It helped protect Rylan Henry, 8, when he fell from the top of a climbing wall. “I'm fine,” he announced as he popped up.

Bowen and the school are planning more projects — possibly installing rubber on the entire playground and buying computers for classrooms.

“Kids only have one chance to be a kid,” he said.

Bowen wants his body returned to Crafton when he dies, for a funeral at his former church two blocks from the school. He wants to be buried in Bethel Park Presbyterian's cemetery.

His illness is beginning to wear on Bowen, Nagorski said. The chemotherapy has side effects that cause him to stagger at times, and he has difficulty doing simple tasks such as buttoning a shirt.

“But his mind is there, and so is his heart,” Nagorski said.